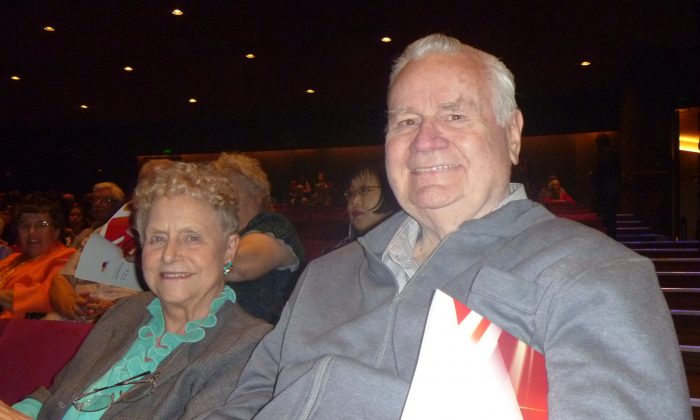 ADELAIDE, Australia–Among the enchanted audience members watching Shen Yun Performing Arts at the Adelaide Festival Theatre on 21 April were Alec Talbot, a former primary school principal, and his wife Julie, a retired teacher and once a haute couturist.

During his career in education, Mr. Talbot held several other important posts, such as president of the Principal Association in South Australia, chairman of the Non-Government Schools Registration Board, and Independent Education Management Professional Chairman.

Mr. Talbot said he enjoyed the show very much, and thought it was “excellent.”

Shen Yun seeks to revive China’s traditional culture and values through classical Chinese dance and music. Each performance is accompanied by the Shen Yun Orchestra, which features a unique mixture of Chinese and classical Western instruments.

“It’s so different, and of course it’s set over a period of 5,000 years of history,” Mr. Talbot said. “China is one of the most ancient and continuing civilisations in the world. And their women are so beautiful and dainty.”

“I love the costuming and adore the men dancing around so energetically. It’s just beautiful,” she continued.

Mr. Talbot added, “She loved the dragon,” referring to the dance ‘Ne Zha Churns the Sea’ in which an evil Dragon King terrorises the residents of a seaside village, until a mythical yet mischievous demi-god is born, and eventually overpowers the beast, according to the program book.

Mrs. Talbot particularly liked the costumes due to her previous line of work in fashion.

“Look, my wife is very interested in the costumes, because before she became a teacher, she used to be a high fashion dressmaker,” Mr Talbot explained. “She made all the ethnic costumes for the school like Greek, German, Italian, Russian, Ukrainian, Polish…”

The hand-made costumes in Shen Yun range from the “Tang Dynasty’s ‘Raiment of Rainbows and Feathers’ to imperial dragon robes, phoenix coronets, and cloud capes; from the civil official’s headdress and robes to the warrior’s helmet and armor; and from the traditional rightward cross-collared Han clothing to the ethnic attire of the Manchurian, Tibetan, Dai, Mongol, and Uyghur ethnic groups,” the New York-based company’s website states.

Mrs. Talbot commented on their quality. “The costumes were excellent. And they’re so colourful. There’s no doubt about it–the Chinese seem to be very successful in almost everything they do.”