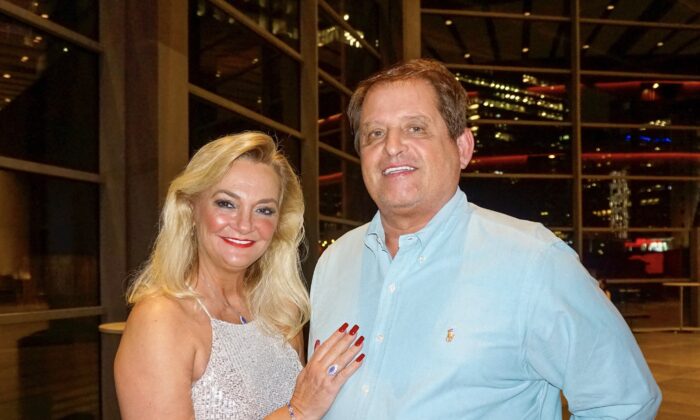 China, once known as the “celestial empire, has a truly glorious culture that was believed to have been gifted from heavenly deities to earthly beings. The many art forms, such as dancing, music, and writing, were conduits for learning and are believed to be passed down from gods to man.

With years of experience in dance, Ms. Golanski said she could appreciate the hard work behind the level of excellence of Shen Yun‘s performers.

“I just think the choreography was absolutely lovely, and the unison of the dancers was outstanding. I truly enjoyed the performance tonight,” she said.

“And to be able to do the extensions, and the gymnastics, and the flips … that was just really, really spectacular.”

Shen Yun’s mission is to present its audiences with the true image of China’s five millennia of rich culture. It delights its audiences with a panorama of story-based dances that portray the life across China’s different dynasties, as well as cherished legends, heroic tales, and ethnic dances from regions extending from Mongolia to Tibet.

“I really enjoyed the dance about the pink flowers where the dancers used the pink fans. That was just a gorgeous, gorgeous performance,” Ms. Golanski said.

The “Plum Blossom in Spring” dance depicts the stoic resilience of plums blossoms as they brave the winter cold to bloom, heralding the arrival of spring.

“The dancers are phenomenally coordinated. The colors are visually entrancing, [even] mesmerizing. It’s almost hypnotic. It really is,” Mr. Metcalfe said.

“And the special effects just added so much to the performance. I … was very entertained by that as well,” Ms. Golanski added.

The couple also expressed appreciation for the Shen Yun Orchestra, which accompanies each Shen Yun performance. The orchestra is a blend of classical European and Eastern instruments. The company’s all-original compositions have won praise worldwide.

‘Chinese People Deserve Their Culture Back’

Also in the audience were Bill and Lila Lee. Mr. Lee is a school district marketing director and Lili, a homemaker.

Mr. Lee praised the precision of the dancers and Shen Yun’s use of color. “It’s really amazing, it’s really pretty,” he said.

“Everything is just beautiful,” said Mrs. Lee, adding that she was really impressed with the first piece, “Salvation During End Times.”

“I think it’s amazing how [the performers] exit off the stage into the screen behind them,” she added, referring to Shen Yun‘s perfecting of a digital technology that allows a smooth transition between the 3D projection and actors on stage.

“The … video-technical aspects are really nice,” he said. He was also surprised to see the live orchestra, which he said added to the whole experience because they were excellent.

Mrs. Lee applauded Shen Yun’s mission to revive China’s true traditional culture to how it was in the pre-communist times.

“I think that Chinese people deserve to have their culture back, and be able to celebrate and live freely and however they want,” she said.