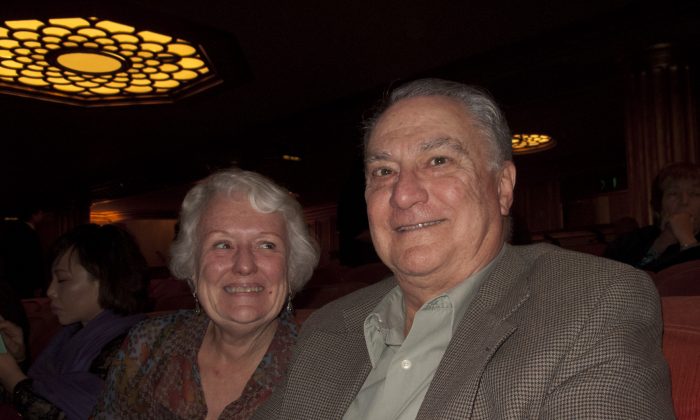 Mr. Ammendolia was a former executive at Aerojet, and had worked with the company for 20 years.

Mr. Ammendolia described the show as an energetic performance, “It’s very good, very entertaining,” he said. “The dancers are wonderful; the costumes are great.”

Established in 2006, the New York-based Shen Yun revives 5,000 years of Chinese civilization through the performing arts.

In particular, the opening of the performance, which showed the Creator leading divine beings down to earth to create the first Chinese dynasty, was really excellent, said Mr. Ammendolia.

A regular patron of the Opera House, Mrs. Ammendolia added, “I liked all of it, the music, the dancing, the costumes. I think it’s been very nice.”

Shen Yun puts on all-new productions each year, incorporating classical Chinese dance, as well as ethnic and folk dances from many of China’s 55 minority ethnic groups.

Of Italian ancestry, Mr. and Mrs. Ammendolia has engaged with Chinese culture long before. “I love Asian style clothing and dance,” Mrs. Ammendolia said. She even decorated her room based on Asian concepts.

Mr. Ammendolia said that he will certainly look at Shen Yun’s performance next year, and will introduce it to friends who are looking for a great live performance. “This is it,” he said.