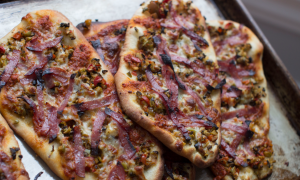 Rethinking Muffaletta as a Thin-Crust Pizza for Mardi Gras
0 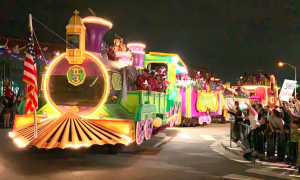 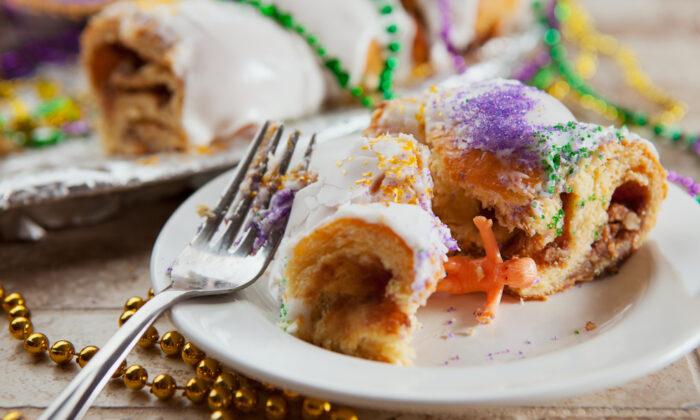 The lucky person who gets 'the baby' in their slice is blessed with good fortune—and the responsibility to buy the next king cake. (Shutterstock)
Food & Dining

If you grew up in South Louisiana, chances are your first adolescent boy-girl dance party was, in fact, a king cake party at someone’s home.

A crowd of kids from school and young neighbors and cousins of the host showed up. The living room lights were replaced with seasonal purple, green, and gold bulbs. Parents contributed chips, dips, sodas, and other snacks, and someone manned the music selections. Everyone wore strands of Mardi Gras beads that rattled and clicked when the slightly awkward dancing began.

It was heady fun for a purpose: By the time you were just getting a chance to flirt with, or maybe dance with, the cutest seventh grader in the room, it was time to cut the king cake to determine who would be the king or queen of the party. A tiny plastic doll hidden inside the cake ended up being served to one of the guests. That guest, after sucking the cake off the non-edible doll, got a paper crown and was declared royalty for the evening.

Of course, with privilege comes responsibility. The person who gets “the baby” at a king cake party is obligated to host a king cake party the following week. All the folks at the original party are invited, along with whomever the next host wants to add. By the time the final party is held on the weekend before Lent, the crowd might have grown, shrunk, or simply changed over.

King cakes, in various forms and by various names, have a longstanding pedigree. The confections ostensibly celebrate the Epiphany, also known as Three Kings Day or 12th Night. Observed on Jan. 6, Christians believe this to be the anniversary of the night three wise men, or three kings, brought gifts of gold, frankincense, and myrrh to the newborn Jesus. (Like many religious and cultural traditions, this one also has at least a few pagan roots, beginning with the winter solstice celebrations of ancient Rome.)

By the late Middle Ages, French bakers were producing a galette des rois for the Epiphany, made from puff pastry filled with frangipane, an almond paste and pastry cream filling. A dried bean, or féve, baked inside the cake symbolized good fortune or blessings on the person who found it in their slice. Lore has it that the bean represents the Christ child; however, food historians note that winter solstice celebration cakes also held a hidden “lucky bean,” and this tradition was likely a holdover from pagan times.

Farther south, around Provence and the Basque country, a ring-shaped cake made of brioche dough and flavored with candied fruits became the preferred dessert of 12th-Night celebrations. And in Spain, the roscón de reyes cake was also shaped to mimic a crown, with dried fruits serving as “jewels.”

Basque and Provençal settlers are credited with bringing the king cake tradition to New Orleans and the gulf coast. As the tradition evolved, king cakes became inextricably tied to the pre-Lenten Carnival season, and the lucky bean became a plastic baby symbolizing either good fortune or the infant Jesus, depending on the host.

The late Donald Entringer, Sr., owner of the now-defunct McKenzie’s Pastry Shoppes in New Orleans, is credited with being the first to put plastic dolls instead of beans in king cakes. He always insisted he was just trying to find a cute alternative to the bean, and not an image of the baby Jesus, but the association stuck.

Some bakeries, both in Europe and the United States, have taken to including ceramic charms that commemorate an event, group, or place with each cake. These days, bakers usually leave the plastic doll or ceramic charm outside the cake for the buyer to insert, thus avoiding any choking hazard among unsuspecting tourists or guests.

An Embarrassment of Riches

Today bakeries and supermarkets around South Louisiana sell (and sometimes ship) hundreds of thousands of king cakes during the Mardi Gras season, which starts on 12th Night and culminates on Fat Tuesday, or Mardi Gras Day (on Feb. 25 this year).

Some are made with a brioche dough, some with a sweet roll-type dough, some with donut dough. Some are “plain,” which can mean simple vanilla or cinnamon-laced, and the rest are embellished with a great variety of sweet or savory fillings. Most are topped with either a glaze or white frosting and dusted with sugar that’s been dyed purple, green, and gold—the colors of Mardi Gras.

“We have 36 different flavors of king cakes,” she said, “everything from strawberry-cream cheese to pecan praline to plain cinnamon sugar-filled. We also make alcohol-laced king cakes that are very popular, for example the German chocolate Jack Daniels and the piña colada with rum. Those are special orders and, of course, you have to be over 21—but we sell a lot of them.”

Every bakery that sells king cakes, including some pop-ups that only exist during the Carnival season, has its own die-hard fans. Some people prefer simple, almost plain king cakes, while others shop for the latest and greatest flavors, including Bavarian cream-filled, chocolate-filled, and pecan-studded. Recent years have even seen savory sausage or boudin-filled king cakes turn up.

“The sky’s the limit in the world of king cakes,” said Grove. “The only limit is someone saying, ‘I don’t think I would like that on my cake.’ If I get inspired by some ingredient I see in the store, I have the freedom to test it out. This year, we were able to buy the most amazing peach filling, so we started making a peaches and cream king cake and it’s very popular. Likewise, if a customer makes a request, we can put together a custom king cake.”

“Everybody in the department has a slice, and the person who gets the baby brings the next king cake to work,” she said. “Sometimes we have king cake in the break area once a week, sometimes more often. But it’s always a treat. And depending on who gets the baby, we all get to share in their favorite king cake flavor from their favorite bakery. Right now, pecan praline seems to be most popular with the staff—the more frosting and sugar the better!”

Of course, adolescents and teens grow up to have adult cocktails and king cake parties in their own homes. And even with a much-loved tradition, there are a few jokes. New Orleans’ most famous chronicler of neighborhood life, cartoonist Bunny Matthews, once created a cartoon featuring his quintessential Ninth Ward characters Vic and Nat’ly. The couple are at a king cake party and when the cake is served, Vic whispers to Nat’ly, “If you get the baby, swallow it because I don’t want all these jokers over at our house!”

Some bakeries make king cakes year-round in colors that celebrate Christmas, Easter, football rivalries, and anything else you can imagine. Still, there are purists who insist king cake is a seasonal treat.

“We don’t make our king cakes year-round,” said Grove. “King cake is all about celebrating Mardi Gras and having a good time before the beginning of Lent. If it becomes something you can get anytime, then it’s no longer special!”