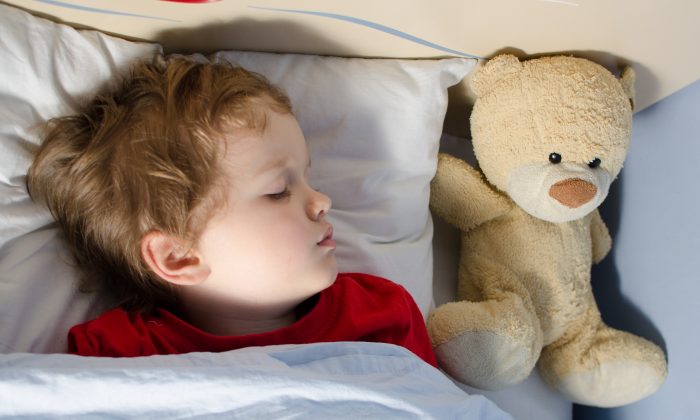 Preschoolers who turn in late turn out to be heavier teens, concludes a new study published in The Journal of Pediatrics.

The later kids stayed up, the greater the risk. In general, researchers found that for each hour preschoolers stayed up past 8 p.m., obesity rates rose about 6 percent by their teenage years.

Previous research suggests that children who lack sleep experience changes in hormonal balance, which can impact appetite and metabolism.

Kids need a lot of sleep. While individual needs vary, the American Academy of Sleep Medicine recently published a recommendation that preschool-age children require 10 to 13 hours of sleep (including naps) for optimal health.

Sleeping Like a Baby Could Prevent Stress and Chronic Diseases

Theoretically, anytime is a good time for children to get their rest. But according to lead study author, Dr. Sarah Anderson, focusing on an early bedtime is the most reliable way to make sure they get enough.

“We know that in the United States preschool-aged children’s wake time is a less modifiable behavior than encouraging an early bedtime,” Anderson said. “They could just stay up late and sleep in, but for many families these days, young children need to get up, not so much because they physiologically want to wake up, but because their family needs to go to work or school.”

Lack of Sleep Can Raise the Risk of Heart Attack

Anderson’s study didn’t look at how staying up late caused obesity later in life, but similar studies have. Previous research suggests that children who lack sleep experience changes in hormonal balance, which can impact appetite and metabolism.

Some sleep experts also propose that children who go to bed late have more opportunity to snack in the evening on fattening foods. Over time, they consume many more calories than peers who turn in early.

“It’s also plausible that above and beyond sleep variations, having a regular routine could theoretically have an independent effect on adolescent obesity,” Anderson said.

Research has shown that establishing a nightly ritual before going to bed makes a big difference in making sure kids get enough rest. A study published last year in the journal Sleep found that a regular bedtime routine was associated with improved sleep in children. Parents who were consistent and started the routine when kids were young experienced better outcomes.

Want a Good Night’s Sleep? Then Never Do These Things Before Bed

Other research has shown that a consistent bedtime routine results in better sleep quality where children are less likely to get up in the middle of the night or have their sleep disturbed.

A bedtime routine doesn’t have to be fancy; it just needs to be a regular. Experts urge parents to steer their child toward the same activities in the same order on a nightly basis. Of course, part of the routine should involve turning off electronic devices so that children have a chance to wind down.

“Getting the television out of the child’s bedroom is a good place to start,” Anderson said.