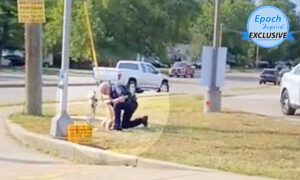 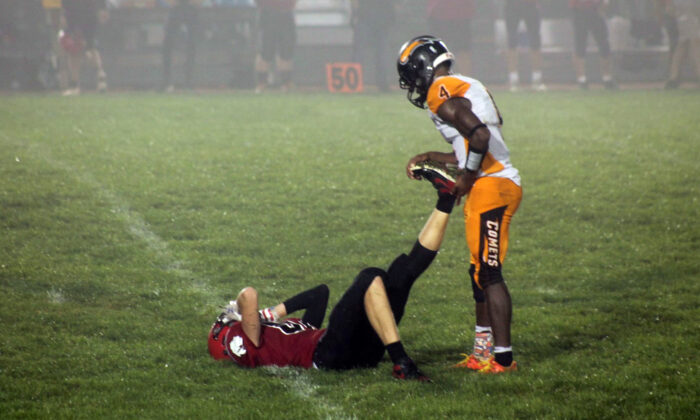 An Iowa high-school football player was caught on camera helping an injured player on the opposing side—and his kind act has gone viral.

During a Friday night game in early September, after a play ended, Charles City Comets wide receiver Mario Hoefer witnessed one of his opponents go down. Carter Steinlage of the New Hampton Chickasaws was on the ground clutching his leg in pain.

“[Carter] was closer to our side of the field, which was a way from his support system,” mom Wendy Hegtvedt Luft, whose son plays with Mario, told The Epoch Times. “Mario looked back, saw the boy down, and ran back over to help him. He grabbed the boy’s leg and started stretching him out.

“For a short moment,” she added, “they were the only two out there on the field … Two kids; one needing help, and the other reaching out.”

Wendy squared her camera on the two players and snapped a photo.  As the crowd took in the scene, some began singing Mario’s praise, the mom said, calling him a “great kid.” Others applauded.

“I just wanted to remember that single moment; it was a sweet thing for Mario to do,” said Wendy. “I shared the picture on my social media, along with other photos from the night … I had no idea the picture would go viral.”

Wendy posted the photo on Facebook where it caught the attention of people from both towns, with both sides approving of the kind gesture; one Chickasaw mom remarked that the seniors have been playing against each other for years.

Mario told Today that he saw Carter go down, but didn’t see anyone rushing to his aid.

“I know how this feels, [and wanted] to help him get through this cramp until someone came over,” he explained. “I was not expecting it to blow up, I just wanted to help him. I would do it the same, over and over again.”

Wendy described Mario, the team’s captain, as a “super intense competitor” and an “incredible athlete” who fosters brotherhood integral to his teammates.

Interestingly, some markedly competitive netizens criticized the Charles City player for revealing weakness to the opposing side; meanwhile, some dragged race into the equation—observing sportsmanship and comradery shown between a black and white player.

“None of these people were there, so for those of us who were, take it for what it is worth,” Wendy rebutted.

“During a fall football game, between high-school teams, under the Friday night lights, in rural Iowa, an athlete reached out and helped another who was hurting during a game,” she added.

“It was a great moment to watch, and I’m honored to have had the opportunity to capture it for everyone to see.”