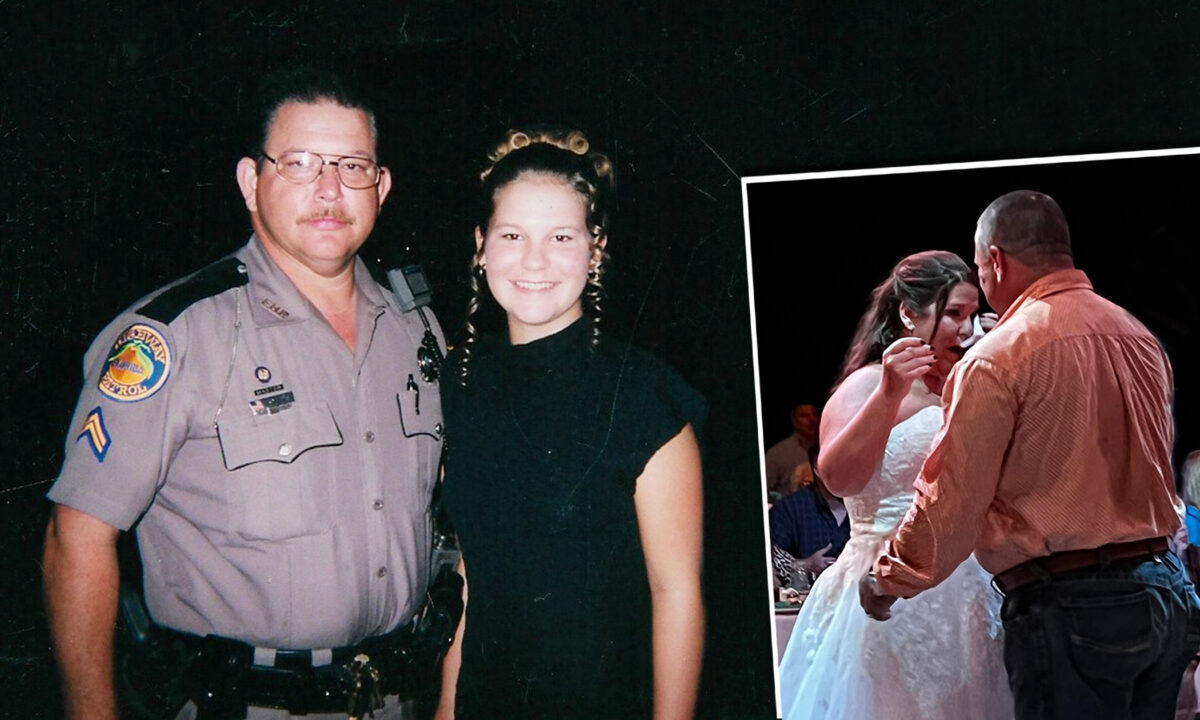 Witnessing troopers taking turns to dance with the daughter of a fallen colleague was a heartwarming moment that wedding attendees will never forget.

Heather Ritter, 34, got the surprise of her life when Florida Highway Patrol Troopers (FHP) stepped onto the dance floor for what would have been her father-daughter dance on her special day on Dec. 11, 2021, in Webster.

“Their gesture was really touching and meant a lot to me and my family,” Heather told The Epoch Times. “Dancing with them was like having a piece of my dad there with me. It was all very emotional, but I couldn’t have asked for a better surprise.”

Heather’s father, Nick Sottile, was a 48-year-old sergeant with the Florida Highway Patrol when he was murdered on the side of U.S. Highway 27 during a traffic stop on Jan 12. 2007.

“My dad had been with the Florida Highway Patrol for 24 years and was looking forward to retirement so he could travel with my mom, Liz,” Heather recalled.

Sharing more details of the tragic incident, Heather, a teacher at Pinecrest Lakes Academy in Clermont, said that her father was working overtime when he saw a car cut off a tractor-trailer. Pulling over the 19-year-old for reckless driving, he was shot in the clavicle artery, causing him to internally bleed to death.

“His killer was caught a couple of days after a massive manhunt. He pled guilty with the death penalty on the table,” Heather said. “He had no warrants, no drugs, no reason to fire upon my dad, he had mentioned to his passenger in the car that if he was to get pulled over that day, he was going to kill the cop. My dad just happened to be the one who pulled him over.”

The sergeant’s murder came as a huge shock to family, friends, and the community of Lake Placid, where they lived. For a while, the family was surrounded by love and support from the community. But eventually, everyone went back to their life, and soon Heather, her brother, Nick, and her mother had to cope with their grief.

Although in the years that followed, the family moved on in with their lives, with Heather attending a Veterinary Technician Program at St. Petersburg College and her brother going to work for her dad’s previous squad in Tampa, Heather says the family never got over losing her dad and still have their moments.

Fifteen years on, on her wedding day with Anthony Ritter, Heather was aware that her father’s tightly knit squad members and friends would be there and she had planned to get a photo with all of them.

However, she admits that she was unaware of all the surprises that came with the mother-daughter dance. Soliciting the help of Anthony, Liz put on a special presentation that played during the dance.

“It included photos, videos, and audio of my dad and I,” Heather said.

However, it didn’t just stop at that, she explained: “My dad’s squad members and friends decided, unplanned, to step in and ask my mom for turns to dance with me.”

Although an emotional Heather was focused on watching the memorable montage of her father play in the background and taking the moment to dance with each of the squad members, attendees told her there was not a dry eye in the building.

“Many people asked why we had not put tissues out beforehand,” a touched Heather said. “I told them in my defense, I had no idea any of it was going to happen.”

Overcome with the emotion of the beautiful memories of her father, Heather described her childhood growing up with him.

“My dad was your typical police dad who has a daughter, he was strict on me growing up but I knew that he was always there for me when I needed him,” Heather recalled. “I remember him coming to my elementary school to have lunch with me and having to try and fit at the lunch table with his gun belt and everyone being in awe of him.”

Heather remembers her father, a popular figure in the community, as an amazing person who was always willing to help people out.

“He was fair and honest, always trying his best at everything he did,” Heather said. “He was the best storyteller and would captivate an entire room with his stories and make people laugh so hard that they’d cry.”

The sentencing of Nick Sottile’s killer has still, after all these years, not been decided. Currently, the family is living through the heart-wrenching ordeal of having had their case with the Florida Supreme Court pushed back numerous times, due to the pandemic.

In an effort to support others who have lost a loved one in the line of duty, Heather has taken on the role of vice president of Central Florida Concerns of Police Survivors (C.O.P.S.), a volunteer organization that has programs to help survivors through the process of their grief and help them cope with their loss while being surrounded by professional counselors and those who have been in their place at one time or another.

Their mission, Heather states, is to support survivors in finding their “new normal.”