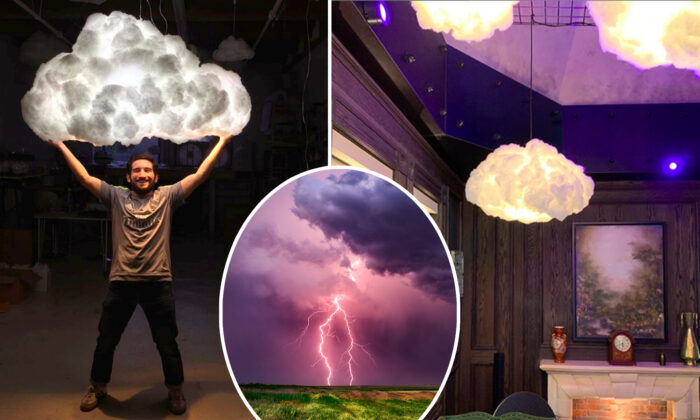 For people living in the forest of skyscrapers like Manhattan, seeing the open sky is often not always part of their everyday scenery. With his “Cloud” lampshades, Brooklyn-based artist Richard Clarkson brings a piece of that celestial glory indoors for anyone to enjoy.

Describing himself as an artist “whose pieces are inspired by the celestial,” his designs, ranging from furniture to lighting, are full of references to the skies and space with names such as “Constellation,” “Rain,” and “Globe.”

Not content with simply using the shape or form of a cloud, Clarkson creatively uses technology to give people the whole gamut of clouds and weather, short of actually sprinkling water inside.

The basic model of Clarkson’s “Cloud Shade” is a polyester fabric shell covered in acrylic wrapped around a light fixture. With intricate folds of white, the lamp mirrors the puffy cumulus clouds you might see looking out the window of a New York apartment building.

The light inside can be put on a dimmer to provide different levels of brightness to match any time of day or night. This unique, ethereal lamp finds a way to bring the outside in, but also suggests a serene, calm cloudscape.

The Cloud Shade perhaps looks most realistic when hung from the ceiling, but the design allows it to work as a floor lamp or even on a table.

For people who prefer the changeability of storm clouds, Clarkson took the basic design and embedded smart technology. This gives the “Smart Cloud” a whole host of other features.

This version of the cloud shade can mimic nature, complete with a “thunder” setting, via prerecorded sound clips that can be activated from a smartphone, and “lightning,” which makes the lights inside create realistic flashing effects.

As Clarkson’s website explains, “This is a kind of magic, not based on illusions and trickery, but on sensors and code.” The Smart Cloud can also double as a sound system. It isn’t limited to thunderstorm effects, either. “Featuring a powerful speaker system, The Cloud allows its beholder to stream music via any Bluetooth compatible device and can adapt to any desired lighting and color.”

Perhaps the most spectacular member of the whole cloud shade family is the “Floating Cloud,” part of the Making Weather project, a collaboration between Clarkson’s studio and the levitation specialists Crealev.

Using sensors and a magnetic base, the cloud shade, while resting on a table, can hover a few inches in the air while doing all the atmospheric functions of Clarkson’s other clouds. The ability to play the sound of “thunder” and make “lightning” is amplified by the amorphous object literally floating in midair.

As Clarkson told Dezeen, “The shape of the cloud is designed to represent a cumulus hovering on the horizon, though we also drew inspiration from more generic cloud-computing icons.” To add the appearance of movement to the floating cloud, it is designed to spin around, while also subtly moving up and down above the base.

While Clarkson has perfected the process for making the clouds, the artist hasn’t gone to mass production. No two clouds in the sky are ever exactly the same shape or texture, which is why “[e]ach cloud [shade] is hand fluffed so each one is unique—just like a cloud should be.”

With some clever programming, the cloud shades could not only be a great conversation piece but could also be used for a party atmosphere, even as part of a child’s bedtime routine or as a kind of alarm clock in the morning. The possibilities are infinite, just like the ever-changing sky that inspires Clarkson’s work.

It’s also possible that this native New Zealander, who flies between Brooklyn and his homeland, gets plenty of cloud inspiration on the long flights that take him up into the sky and above the clouds themselves. One of his computer renderings even imagines what an airport lounge with his cloud lamps would look like.

While basic versions of the cloud shade are currently available, priced starting between $300 and $400, the more full-featured versions go up into the thousands. For some, though, it’s a small price to pay to have the sky all to themselves in a crowded urban apartment.