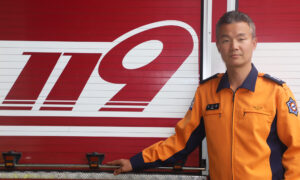 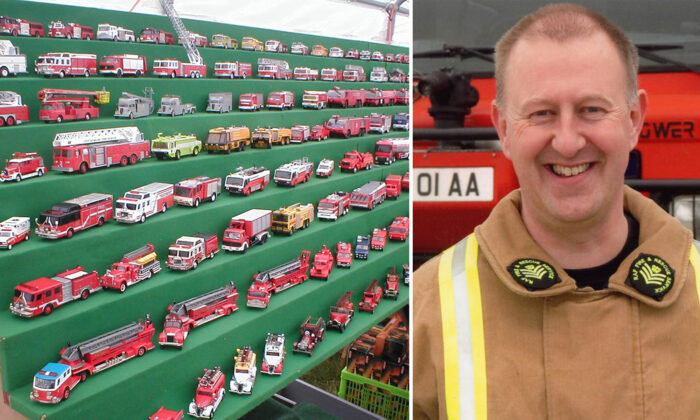 Firefighting Enthusiast Opens His Own Museum to Share More-Than-4,000-Piece Collection

A British firefighting enthusiast has opened his own museum to showcase his over 4,000 pieces of memorabilia that he has been collecting for 36 years, after running out of storage space.

Retired Royal Air Force (RAF) firefighter Steven Shirley, 55, describes his massive collection as “a beast that is out of control.”

“I have had an incredible career which allowed me to travel the world,” Steven, from the town of Scampton in Lincolnshire, England, told Caters Media Group. “I have seen the best and the worst, but my collection is something I enjoy and allows me to give something back to my job of almost 37 years.”

The grandfather of three’s extensive collection includes 52 real-life decommissioned fire engines, 3,500 model fire engines, 300 fire extinguishers, and 300 fire helmets, among other eclectic items. He believes his haul to be the largest ex-military collection in England.

It was actually Steven’s wife, Kim, 55, who kickstarted his passion for collecting. She bought her husband a model German airfield fire engine in 1983 upon his graduation as a firefighter from RAF Fire School, in Catterick.

“[O]ne thing led to another and my collection grew fairly quickly,” Steven explained, “my desire to expand led to me buying a real fire engine in 1986 for just 200 pounds [US$249].”

“It was in an auction that I was fortunate enough to win—I now have 52—one of which traveled to Normandy six days after D-day!” he added.

However, the Scampton resident doesn’t only just have a keen desire to collect military items; he also emphasized that his collectibles include ceramic figures, Trumpton fire brigades stuff, amusement arcade rides, and anything that is fire-related. “I believe I have some of the rarest items and only ones left in the world,” Steven said.

Besides buying, Steven has also become a trading aficionado in the years since starting his collection. During his trips to various European countries, the United States, Iraq, and the Falkland Islands with the RAF, Steven exchanged numerous items for more coveted memorabilia, including swapping a Red Arrow merchandise for a Japanese firefighter uniform with another passionate collector.

He has also “dabbled” in internet shopping for items on his wish list but laments that many collectors’ items are prohibitively expensive. Many pieces in Steven’s collection, he explained, have been donated.

However, the collector was reticent to reveal exactly how much of his own money he has spent on his hobby in total.

As Steven’s collection grew, both in size and reputation over the years, the ex-RAF firefighter was offered an 85,000-square-foot storage facility in Scunthorpe by the North Lincolnshire council. Steven then registered his historic haul as a charity, called the Museum of RAF Firefighting, in 2018, and took on 40 volunteers to manage the rare collection.

Steven’s charity joined the Association of Independent Museums and founded the Fire Heritage Network U.K., as well as joined forces with Scunthorpe’s North Lindsey College with a work placement program for students in mind.

Some of Steven’s museum volunteers are in their eighties, and the firefighting enthusiast reflected that their roles have given them “a new lease on life.”

“They are as passionate as me and are able to relive their memories during tours—one even said to me the museum is the reason he gets up in the morning,” Steven told Caters Media Group.

The Museum of RAF Firefighting relies entirely upon donations, and the upkeep, says Steven, is costly. Since the council-run storage facility has a finite lease, Steven is hoping to secure funding to move his entire collection to a new space within Lincolnshire so that his dream of sharing his collection with the world can live on.

“My hobby has turned into a community focal point which keeps people’s memories alive, along with promoting a career in the RAF,” Steven explained. “I use the collection as a tool to inspire and give young people an insight of what it is really like to be in the RAF as a firefighter.”