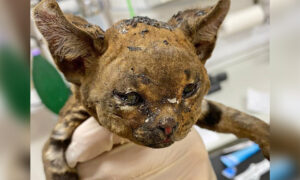 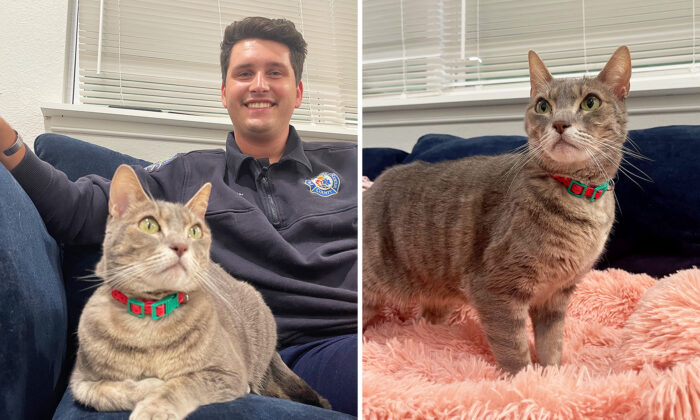 Firefighter Adopts Cat Rescued from Burning Shelter: ‘I Signed Papers Right Then and There’

A story of love has risen from the ashes of a devastating fire at a Florida animal shelter. One of the firefighters who responded to the emergency went home with more than his call of duty served: he adopted one of the survivors.

The Pet Alliance of Greater Orlando’s Conroy Road shelter premises went up in flames on the night of Sept. 15. As soon as the building became safe to enter, staffers battled through the night to save as many cats and dogs as possible.

Orlando native and Orange County firefighter Brett Maneri, 22, arrived with his crew to help after the fire was extinguished, personally pulling three surviving cats from the building. And a tabby cat named Mia stole his heart.

“Our purpose was ‘fire watch,’ to make sure the fire didn’t rekindle and to check for hot spots and the extent of the damage,” Maneri told The Epoch Times. “As we were in there with our thermal imaging camera, looking for hot spots, I found a cat hiding behind a computer monitor in one of the rooms.”

Maneri grabbed the cat and took her outside, as the role of first responders evolved into a search and recovery effort.

“My crew and I split up to search for other animals,” he said. “One of my crew members moved a cat condo, found Mia in a cage under all of the rubble and debris, and took her outside to get help. I saw Mia as they were taking her outside, and saw that she was petrified.”

Maneri said the entire experience was “heartbreaking,” crediting the group effort of shelter staffers and first responders for making the immense rescue possible. “This was a group effort,” he said. “Without my crew and everyone else who responded to the scene, none of this would have been possible.”

Pet Alliance of Greater Orlando said in a statement that 45 cats and 26 dogs were brought to safety that night. Tragically, 17 cats died from smoke inhalation in the fire that decimated their premises.

The fire started in the shelter’s public clinic, and is suspected to have been electrical, according to the statement.

Mia, alongside other survivors, was taken to Pet Alliance’s Sanford site. But Maneri, who has been an Orange County firefighter for almost two years, had already fallen head over heels; after clocking off work the day after the fire, he drove to get her.

A long-time fosterer who grew up volunteering for Florida Boxer Rescue, Maneri was delighted to find that Mia had been medically cleared to go home.

“I signed the papers right then and there,” said Maneri, who has other rescued cats and dogs at home.

Since joining the Maneri household, Mia is recovering and adjusting well to her new home and surroundings.

“She has some bruising on her lower back that is still tender,” said Maneri. “She definitely is a lover, and loves to cuddle and lay down on top of you when you’re sitting and watching TV on the couch, or going to bed.”

As Maneri settles in to life with his new furry pal, his plea to the public is to donate to Pet Alliance of Greater Orlando in their time of greatest need.