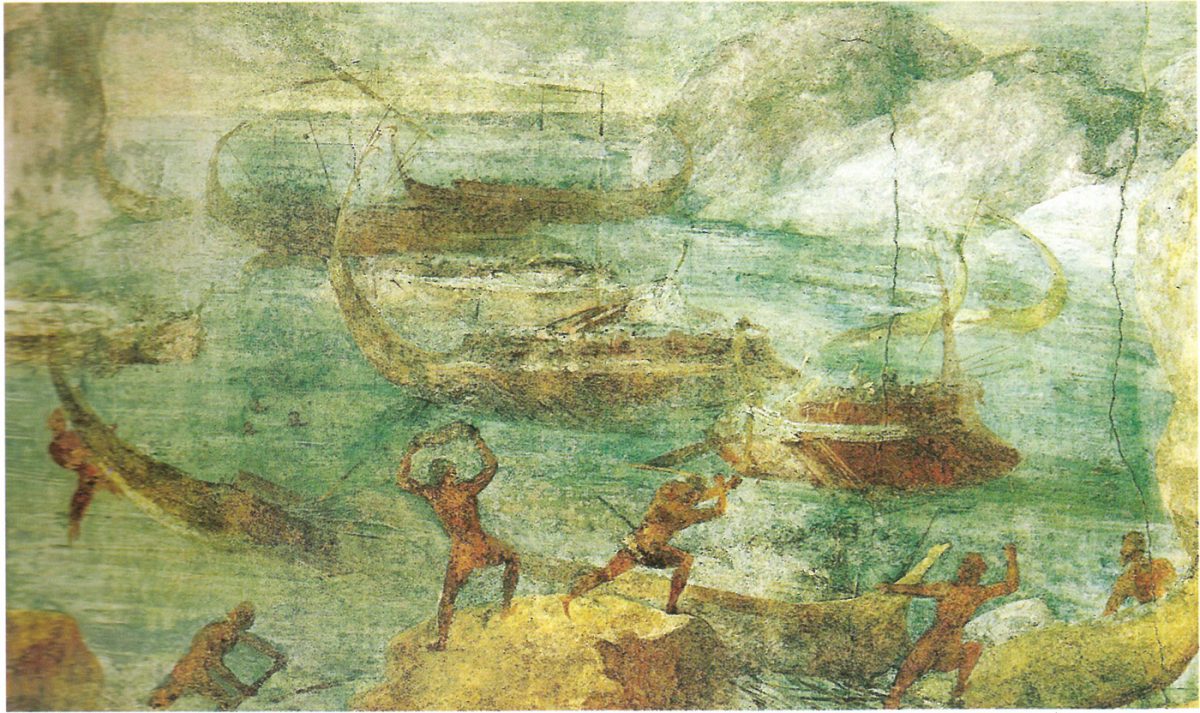 Odysseus and his companions suffer from the man-eating giants, the Laestrygonians. Mural from the first century B.C. from Villa Esquillino in Rome. Vatican Library. (Public Domain)
Books

Finding the True Self, Part 5: Navigating Beyond Fear

In modern psychology, we have books like “Feel the Fear and Do It Anyway,” which are international best-sellers and which focus on the idea that fear is the fundamental issue besetting human nature. The fear response clouds our judgment in so many areas of our lives, and when it does, we abandon our rationality, that is, our being Homo sapiens—wise, rational creatures.

On his journeys, Odysseus has encountered Sloth (the Lotus-Eaters), Lust (the Cyclops), and Gluttony (the Aeolians)—three of the so-called seven deadly sins. But as we remarked in our first article in this series, the Enneagram includes nine deadly sins. And now on his voyage, Odysseus encounters one of the two extra sins that are not included in the typical list of seven: the sin of Fear.

Actually, this sin is thought by some to be even more primary, or basic, than the seven that are frequently commented on. So before considering Odysseus’s encounter with the Laestrygonians, or number Six on the Enneagram, let’s briefly consider why there are nine deadly sins.

This is a controversial area, but one theory reported by Richard Rohr in his book “The Enneagram: A Christian Perspective” is that ideas similar to the Enneagram are to be found in the work of Evagrius Ponticus, a Christian mystic who lived in fourth-century Alexandria. Evagrius identified eight “deadly thoughts,” plus an overarching thought he called “love of self.” This made nine sins, and Evagrius wrote about “remedies” to these thoughts.

On top, then, of the normal seven deadly sins of Anger, Pride, Envy, Avarice, Gluttony, Lust, and Sloth were added Fear and Deceit. Also, just as seven is a mystical number, so is nine, which is a trinity of trinities. And, at the end of the day, the Enneagram works, so nine it is!

A Visit to the Laestrygonians

After six full days of rowing, on the seventh day Odysseus and his crew find the island of the Laestrygonians, representatives, as each encounter is, of the worst aspect of that type of personality.

As a reminder, the Sixes’ basic desire is to be supportive and supported. At their best, they are committed, loyal, self-sacrificing team players; at their worst, they are suspicious, paranoid, and centers of deep negativity.

As Odysseus and his crew approach Laestrygonia, they see a “craggy fort” and a land where shepherds seem inordinately active and productive. Odysseus comments that here “a man who never sleeps could rake in double wages.” That surely should give us pause for thought, for what men never sleep? And what happens if we don’t sleep?

There is a fine, expansive harbor, but the passage in is “cramped” or restricted. Through it, 11 of Odysseus’s 12 ships pass, while he decides to moor his ship outside, well clear of the “harbor’s jaw.” This proves a prescient move.

Three scouts are landed and sent ahead to find, Odysseus hopes, men like himself who “live on bread.” Living on bread is a sign of human society, indeed, of human community. We should be feeling uneasy here because the name of the Laestrygonians means “gathering raw skin,” which is a long way from baking bread.

The scouts meet the “strapping daughter” of the king of the Laestrygonians, Antiphanes. According to Michael Goldberg in his book “Travels with Odysseus,” this name means “opposed to recognition,” or as another translation puts it, “unspeakable.” This is not just about being difficult to pronounce. In the first instance, being opposed to recognition suggests someone hiding, lurking in the depths to conceal who they are really are; and in the second, “unspeakable,” we have the sense of “utterly evil,” or something so bad it is not even to be spoken of. And so it proves.

On entering a “sumptuous palace,” the scouts meet the queen, “huge as a mountain crag who filled them all with horror”; she calls her husband, Antiphanes, and he immediately tears one of the scouts to pieces in preparation to devour him. No warning—just straight attack.

The other two scouts make a run for it as the king howls through the town, and hundreds of Laestrygonians swarm to join him and attack the ships in their harbor. They are giants; they throw huge rocks at the ships, shattering and destroying them, and then spear the sunken crew members as if they were fish and take them home to eat. The Laestrygonians, like the Cyclops, are cannibals. All 11 ships and crew are lost.

Fortunately, Odysseus, whose boat had not committed to going inside their harbor or terrain, cuts loose and escapes. But what a disaster, and how much worse than the encounter with Polyphemus!

Cyclops and Laestrygonians, Eights and Sixes

Goldberg makes the point that some critics in the past have felt that this episode in the narrative is a weak repetition or reprise of the earlier Cyclops story: Both feature giant, cannibalistic monsters, which attack Odysseus and his men.

But as Goldberg demonstrates, nothing could be further from the truth: The Eight and the Six, while seemingly similar, are worlds apart, as critical aspects of the Laestrygonian story show.

It would be true to say that in encountering enemies in life, the Six and the Eight are especially terrifying. While both the Nine and the Seven contain deadly traps for the unwary, their methodologies are passive-aggressive or indirectly aggressive, whereas the Eight and the Six can come straight at you—aggressive aggression, as it were!

Here we note too that the Laestrygonians are offspring descended from two parents, the gods Gaia and Poseidon. Yes, Poseidon, that problematic god (for Odysseus) who also fathered the Cyclops, and who is now seeking to avenge his injured son, Polyphemus, whom Odysseus blinded. This partly explains why it is easy to confuse a Six and an Eight: They have a common ancestor. Moreover, we are now back to Odysseus having to deal with the terrible power of the depths of the sea, perhaps his own subconscious.

The importance of pointing out the similarities, though, lies in the fact that we often confuse one personality type for another, and in doing so, of course, mistake the actual motivation of the person, and thereby probably adopt an ineffective way of dealing with him or her.

And why not fight and outwit the Laestrygonians, as he did Polyphemus? This comes down to the essential nature of the Six personality type. For notice the differences from the Cyclops.

First, their hyperactivity: a compulsive need to be productive, even enduring the absence of sleep. Second, their collectivity and structure: They work as a team and have a king. Third, to join them is “restricted” and difficult. (Many Sixes find their homes in secret organizations!) Fourth, their attack is manic annihilation, bordering on a paranoid fear response.

Each one of these four points contrasts vividly with the Cyclops. Why, Polyphemus almost seems rational in his leisurely decision to eat Odysseus last because Odysseus gave him wine.

One key thing to understand about the difference between the two is that Eights are somatically confident; that is to say, they are entirely confident in the strength of their bodies, which is why Polyphemus can fall asleep with his enemies all around him. Bodies are tangible.

However, the Six places confidence not in his body but in his mind; and of course, the mind, or reasoning, is never secure. It goes round and round in circles, since logic, without a foundational or axiomatic first principle, cannot justify itself.

The Six can never be certain of whether someone is a friend or enemy, and so the strategy is to strike first before the other does. Keep in mind too at this point that the king’s name, “opposed to recognition,” also points toward an inability to discern what or who someone is, for a lack of recognition means the failure to name them.

Goldberg suggests that the Six is projecting outward his or her own inner hostilities to the world, and with their, as he calls it, “self-invalidating mind-set” there is no fighting against them, for they cannot, will not, change their minds or thinking.

In dealing, then, with the Laestrygonians, a number of points emerge: First, to establish the safe “anchorage” outside their port of call. To wholly identify with their mind-set, to fear, is fatal.

Second, one needs courage, which is always the antidote to fear, and in this case, it is about naming—or removing the invisibility—of what is going on. Bad Sixes thrive in shadows but cannot stand any light thrown on their activities.

And finally, if there is no shift in perspective, no acknowledgment of who you are, no positional shades of gray (only black and white), then leave and don’t look back. There is no good to be achieved by staying; it would not be courage, but recklessness to stay and fight.

And, if you are a Six, then you need to engineer some important changes of perspective: primarily, to trust yourself and not abrogate all authority to external others, whoever they be. Also, remember the story of Jesus when he asked the demons for their name. As soon as they gave it (“Legion”), their power over the possessed man was shattered. Thus, the Six needs to look directly at his own fears, and name them, for staying within a realm of the “unspeakable” means he can never escape from his own internal terror.

Finally, a simple thing to practice, as a Six, is giving compliments and recognition—again, making visible the real and the good—which they tend not to do.

With one ship left, Odysseus, devastated, sails away. And so he comes to the land of the Five, where the witch Circe dwells.

James Sale is a poet and businessman whose company, Motivational Maps Ltd., operates in 14 countries. James will be appearing in New York to do talks and poetry readings for The Society of Classical Poets on June 17, 2019, at Bryant Park and The Princeton Club. To meet James and for more information, go to http://bit.ly/Poetry_and_Culture