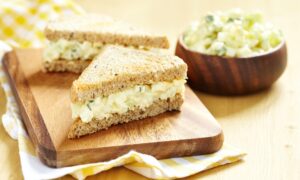 The Secret to Mom's Egg Salad? It's in the Celery
0
Share Now
TelegramFacebookTweetEmailTellMeWeReddit
Copy Link 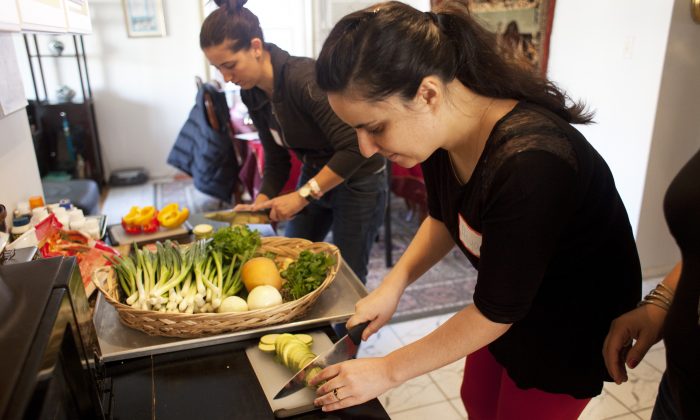 The workshops are intimate, with no more than six students. (Courtesy of The League of Kitchens)
Food & Dining

Immigrants’ Cooking Secrets Are Revealed at The League of Kitchens

There are cooking secrets that can only be learned at your mother’s knee, among pots and pans and kitchen messes. But not everyone gets to learn those.

As a child, whenever Lisa Gross showed interest in helping in the kitchen, her Korean grandmother, who lived with her family, would say: “Don’t worry about cooking. You should go and study, that’s more important.” Her own mother had been in the same situation.

After college, Gross found herself yearning to cook Korean food—dishes that her grandmother used to make: for example, kimchi, japchae, and doenjang guk (a Korean version of miso soup). But by that time, her grandmother had passed away, and so she turned to cookbook recipes. But nothing tasted quite the same as her grandmother’s dishes.

“It was good, but it always seemed like something was missing, some ingredient or step or technique or trick, those are the kinds of things you have to learn from a person, that you can’t learn from a recipe,” she said.

She found herself thinking: “Wouldn’t it be great if there was a Korean grandmother that I could learn from, learn her recipes, cook with her in her own kitchen. And then I started to have this fantasy, wouldn’t it be amazing if there were ‘grandmothers’ from all over the world who I could learn their family recipes from, and cook in their kitchens.”

That was the beginning of The League of Kitchens, which now offers cooking workshops with immigrants in the intimate setting of their own homes. And that means going where the instructors are, from Bay Ridge, Brooklyn, for Lebanese cooking to Bayside, Queens, for Korean cooking.

It’s a culinary experience as well as a cultural one. At instructor Sunny Kim’s house, earthen jars of homemade soy sauce sit on the front porch, while in the backyard, crocks of kimchi are buried in the ground, amid the garden, where about 20 types of vegetables and various fruit trees like plum, apple, and cherry grow. For Koreans, the connection between food and health is paramount, said Gross. “My mom is always calling up, ‘Lisa, I read in a Korean newspaper that carrots are really good for you. Bruce Lee ate a lot of carrots, so I’m going to try to eat more carrots.’”

At Kim’s house, I’m offered ginseng tea on arrival, along with a delicious, healthy snack made of grains of her own making. For japchae, a dish of sweet potato noodles with vegetables and eggs, restaurants ordinarily use four or five vegetables. Sunny’s version has about 10 vegetables, each cooked separately to maintain color and taste.

“One thing I learned from all our instructors is that for so many of these cuisines, to really cook them properly and to their fullest expression, they are time-consuming and labor-intensive. So you know at a restaurant, they’re not going to cook all the different vegetables for japchae separately, they’re not going to put in 10 items that increase the cost. They’re going to do five and cook them in the same pan because most people can’t tell the difference, and it’s a lot quicker and cheaper for them,” said Gross.

Traditionally, Kim said, the Korean diet is seasonal and consists of 80 percent vegetables. Whenever she prepares a meal there are no less than three types of vegetables on the table, varying in color, texture, and taste.

Kim encouraged us students to try our hand at making vegetable pajeons. Hers are beautiful, with alternating strips of red and yellow bell peppers, green scallions, held together by a touch of egg.

We each approached flipping the pancakes like novices who learn to flip crepes—not so much making them airborne as using a spatula and a hand to turn them over. I’m a complete wimp when it comes to handling hot foods with my bare hands, but got over it. This is where the group started bonding too, caught in the anxiety to see if each of our pancakes will hold together and survive the flip.

There’s no substitute for hands-on learning—and being corrected along the way. For these five and a half hours, Kim has effectively become the Korean mother that neither of the five of us ever had, dispensing culinary and health advice, and telling tales of Korean foragers caught in the act in state parks.

In the end, the feast is delicious. After five hours, we’ve eaten and drunk our way not only through ginseng tea; Korean sweets; dumplings; pajeons, served with vinegar and Kim’s homemade soy sauce (from a recipe she’s perfected over three years); and chapjae, but also watercress namul, chwi namul (mountain vegetables), her homemade white kimchi, and clementines.

Maybe just as nourishing as the food is the newfound fellowship, between people who made and broke bread together.

Kim, who also juggles a full-time job as executive director of the Korean American Community Center of New York, was compelled to share her knowledge. “Sharing and serving my community is very important to me. Some Korean women don’t like to give their recipes to others. I believe that God blessed me and that if I don’t share what I have, my shoulders will have a burden,” she said.

The League of Kitchens offers cooking workshops throughout New York City. They include a welcoming snack or lunch, hands-on cooking instruction, a final meal, and a booklet of recipes. Prices range from $100–$195. Workshops are currently offered in Afghan, Bengali, Korean, Greek, Indian, and Lebanese cooking, with plans for expansion.