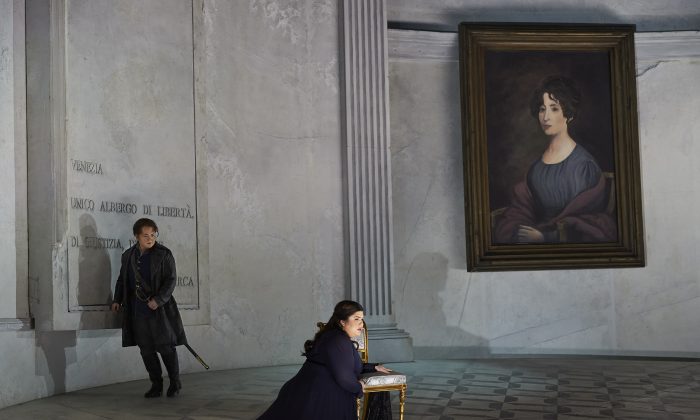 TORONTO—Opera is larger than life, combining words and music to produce drama that may be at once foreign and intimately connected to us.

That is why the some of the best operas last in the repertoire for hundreds of years, having as strong of an appeal to audiences now as they did when they first premiered—sometimes even stronger.

“I think that opera is an inspiration,” says American mezzo-soprano Elizabeth DeShong, who is currently performing in the Canadian Opera Company’s (COC) production of Rossini’s “Maometto II.”

On one plane are the theatrical elements.

“I think anytime you get to step in someone else’s shoes … anytime you can inhabit the situation, the feelings of another person, when you get that chance, I think it creates within you a compassion and empathy,” says DeShong.

Then there is the music, which uses both the power of the human voice and that of the orchestra to communicate meaning beyond that provided by spoken words.

That’s why the most successful operatic staging puts music as the priority.

Anyone who has watched an opera performed in concert probably realized that the experience is almost as vivid as watching the staged version.  Just like a novel has the power to evoke visual imagery through words, the opera has the power to stimulate the imagination through the lyrics, and, even more so, the music.

DeShong compares watching an opera to watching the Olympics.

“People who don’t follow sports will tune in to the Olympics to see what people at their best can do and accomplish, and I think in the realm of music, opera does that.”

In addition, the art form provides the opportunity for self-discovery.

“Opera should inspire us to be and to achieve, and to dream and to experience, and I think that’s what we can experience when we go to see opera. We can see people, hear people do incredible things, and we can explore ourselves through the music.  It’s a wonderful combination of things,” ” says DeShong.

“And that’s why I wanted to do it. The competitor in me saw it as the highest goal in music—to be able to stand on a stage, without amplification, relying solely on what my body and my imagination could accomplish.

“I think it inspires us in whatever field we’re in to be great.  I think we can take that away. We can learn about ourselves and we can grow.  I think we need things to aspire to,” she says.