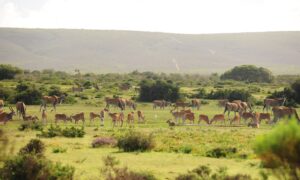 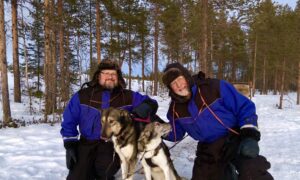 Father and Son in Sweden
0 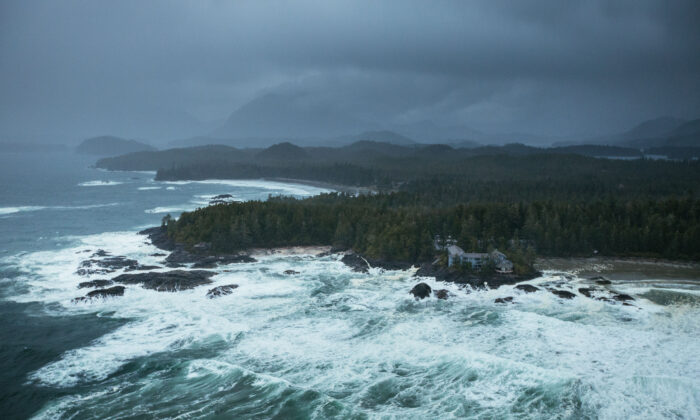 Finding Energy in the Storm

On a winter trip to a wild destination, I sought bad weather, but found more
By Tim Johnson
Print

It shouldn’t have been a surprise, really, in a destination prized, in winter, for its hurly-burly, wavy and windy weather. Just before boarding a small plane from Vancouver, airline staff announced a “weather advisory”—noting that we would make the short hop over the Salish Sea, to the wild west coast of Vancouver Island, but everyone should be aware that prospects for landing were, well, up in the air.

“If the ceiling is too low,” the woman at the counter announced, “We will have to turn around and come all the way back here.”

Less than an hour later, looking out the little oval window on the plane, I had some serious doubts. Ears popping as we descended toward the small runway, we were surrounded by nothing but unbroken clouds, rain lashing at the glass. And then—for just a moment, through a brief break in the cloud—I saw it. A shoreline of rugged majesty, huge rocks thrashed by massive breakers, streaky whitecaps trailing back into an endless gray ocean, the rest of it all thick, dark, mysterious, old-growth forest. The storm only seemed to intensify as we neared the ground, with small bits of hail joining into the wintry mix outside.

And, just as I thought I would feel the plane pull up, bank, and make contrails back to the big city, giving up on finding the ground in these conditions, I heard it—the landing gear, going down. Moments later we disembarked, me without even a coat, packed into my suitcase in the spring-like weather back in Vancouver, getting fairly soaked, but rather happy, as I made my way into the small terminal.

I’m in the tiny town of Tofino, set on a tiny finger of land between untamed Clayoquot Sound and the Pacific, on the west coast of Vancouver Island. Though small, with a population under 2,000, and remote—to get here by car, you need to drive “over the hill,” taking a two-lane highway through beautiful mountainous terrain across the breadth of the island—it’s gotten a big reputation.

For one, surf—Outside magazine once named it North America’s best surf town. And fine dining (more on that later). And natural wonders—the town is surrounded by Pacific Rim National Park and the UNESCO Clayoquot Biosphere Reserve. But I’m here mostly for one thing: the bad weather.

While winter in Tofino was once a quiet affair—a few wetsuit surfers, the rest of the locals hunkering down whenever the skies opened up with that particular kind of coastal, heavy, pelting rain—more recently, “storm watching” has become an attraction here, in the cold months. From the airport, I climb into a Mustang convertible (a rather imperfect choice, for the weather) and roar to The Wickaninnish Inn, which some people have told me basically invented the entire phenomenon.

If they didn’t create it, they definitely facilitate. Set on a particularly scenic stretch of Chesterman Beach, I check into my two-story suite to find sweeping views of the water from every massive window, including the one in front of the double-soaker bathtub.

A Relais & Chateau property once honored by Travel + Leisure as North America’s best hotel, “The Wick,” as everyone calls it, defines unfussy, West Coast luxury, a hotel of stone and wood, the latter often shaped inside their on-site carving shed (you can stop by and see them working, anytime you like).

And they encourage storm-watching. I open the downstairs closet in my suite to find a set of hardy rain slickers hanging on the rack. “The Perfect Storm” is just one title that sits on my bookshelf. The “Do Not Disturb” sign says, “Watching the waves from my window.” A pair of rubber galoshes, in my size, arrives at the door, before I can even start to unpack.

But as the skies begin to clear, it starts to look like I won’t need them. The next morning, which is sunny and unseasonably warm, I take a small hike with Liam Ogle of Long Beach Nature Tours, descending to the beach from my room in less than a minute, and then, wearing my tennis shoes, step carefully across rivulets of water and muddy spots.

He explains why the storms are so dramatic here, with waves rolling across the Pacific, unimpeded, all the way from Japan, crashing with great force on these sands, something that’s only intensified in winter winds.

“The energy of these storms, when you’re out here, it’s incredible,” he says.

It’s something I will hear throughout my visit—the energy. There’s the technical side, of course, the electricity, the atmosphere, dropping barometers and rising gusts, and all of that power combining into one turbulent, violent event. But I also get the sense, from Ogle and others, that there’s a spiritual side to it, as well. That in an age where everything seems planned, there’s something rather awesome about something this big, that can’t be controlled.

After leading me back off the beach, down a trail lined with towering, un-cut, old-growth forest, western red cedar and spruce and hemlock, some maybe 1,000 years old, we chat back at the Inn. I ask him about the appeal of storm-watching.

“A lot of these people who come here, they work in high-pressure jobs, their lives are very scheduled,” he says. “And they love just putting on the fireplace, drinking a glass of wine, and watching the mayhem unfold outside.”

Much to my dismay, the unseasonably pleasant weather continues throughout my stay. I get a small taste of the energy on a boat trip with a company called Jamie’s Whaling Station, taking a small boat out onto Clayoquot Sound.

The captain steers us close to the open Pacific Ocean and, as we stick our nose out of the protected waters, the boat begins to rock. Salt spray splashes across the bow. And he soon turns back, the seas too rough to venture further, even on a nice day like today. As we motor back to the dock, we encounter an adorable sea otter, popping his head up playfully to spot us, as we slowly pass.

I spend the next days, dining well on seafood at Shelter, and in the open air at Surfside Grill, chatting with surfers about what it’s like to ride the big waves, and with photographers who show me some incredible shots, taken right at the height of a maelstrom. I put on my fireplace at The Wick, and sit in the tub, and take in the view.

And on the last night of my visit, it starts to drizzle. Not a storm, but I’ll take it. I don my slicker, still dry and unworn in the closet, and slide into my warm galoshes. Emerging onto Chesterman Beach, I splash in those rivulets, and walk down to the edge of the waves. No, it’s not quite what I had in mind. But I think, in just a small way, I can definitely feel the energy.

Stay at the Wickaninnish Inn. (WickInn.com)

The author was a guest of Destination British Columbia and The Wickaninnish Inn.