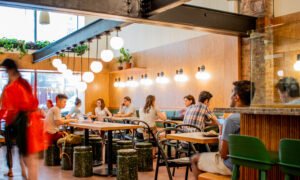 French Onion Soup, an Ode to the Unsung Onion
0 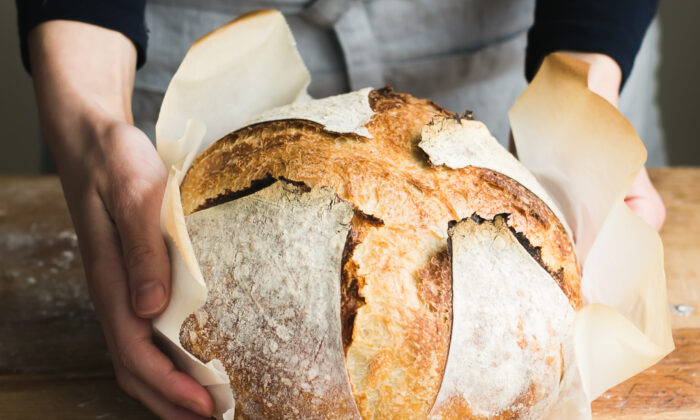 A freshly baked loaf of sourdough, from a starter nurtured in your own kitchen, is nourishment in more ways than one. (Emilie Raffa)
Food & Dining

Sharing sourdough starter, the live culture at the heart of every loaf, can be an act of care and creating community
By Rachael Dymski
Print

When I think of a food that most frequently populates or defines my life, it is bread. The thread of my life can be traced by the bread in it.

There are the peanut butter and honey sandwiches my mom used to pack into little Ziploc bags for me and my siblings to take to the community pool. We would unwrap them with shriveled fingers, cuddled up onto oversized towels by the far fence in the shade.

Cheese on toast, an open sandwich set under the broiler for a few minutes, was a weekly staple in our house. To this day, I cannot smell cheese melting without picturing my dad sitting in the warm light of the kitchen, hands wrapped around a cup of tea, cheese on toast on his plate.

When we visited my grandparents in Eli, England, they used to take us to the river that ran near the cathedral with day-old stale bread to feed the ducks. I remember my grandmother’s soft, lotioned hands giving us each a chunk of bread, me and my sister trying to sneak a bite for ourselves, only to spit it right back out.

Later visits to my grandparents were marked by the ritual of making bread in the breadmaker before bed. My grandad, meticulous in everything he did, would measure out the ingredients and set the timer so that we would wake up to the smell of freshly baked bread in the morning.  My grandparents were breakfast enthusiasts, and would pack the table full with marmalade, jams, butters, fruit, and a full pot of tea to have alongside our baked loaf.

When we traveled to France with my extended family, we would spread cheese, pâté, and meat on our freshly baked baguettes. I have vivid memories of my uncle’s arms overflowing with a dozen baguettes, carrying them over to where we were congregated on an ancient stone wall outside of a castle.

As a high school student, bread was the base for a hastily made sandwich as I ran out the door for school. In college, it came in the form of packaged dinner rolls stuffed in my apartment freezer, the closest to home cooking I came in those years. As a newlywed, bread was the way I began to experiment in the kitchen: with pumpkin bread, muffins, and scones.

I didn’t discover sourdough until a few years ago, when my sister came to visit. I had just had my first baby, and she brought a loaf of sourdough bread with her. I remember the warmth of my kitchen that evening as I sat exhausted on the bench at my table, while my sister ladled out a hearty vegetable soup to go with thick slices of toasted sourdough slathered with butter. It was like after weeks of being stranded at sea, I’d finally found land.

The next time my sister came, she left me a part of her sourdough starter—a live, fermented culture of flour, water, and wild yeast and bacteria that acts as the leavener in sourdough bread. When she explained that this starter was connected to the loaf that had fed so much more than my stomach in those hazy postpartum days, I felt drawn to it. I loved the idea that food could be connected to us tangibly as well as emotionally.

I spent hours researching how to feed my starter, discarding a portion and adding a little flour and water to keep it alive and healthy, and bake sourdough. It was a learning process: I would forget to feed my starter, and had trouble figuring out how to take enough out each week. I tried out several different recipes, and made some flat, tasteless loaves of bread.

Eventually, I found success with a recipe from Emilie Raffa, the New York-based food blogger behind “The Clever Carrot” and author of “Artisan Sourdough Made Simple.” Her own starter was mailed to her from a blogger friend, Celia, all the way in Sydney, Australia.

“Do not overthink it,” Raffa said, about the process of making sourdough. “Bread does not have to be complicated. Just tasty.”

Her recipe mixes together basic ingredients most of us have on hand—flour, olive oil, water, and salt—with the starter. Sourdough is not a quick bread; it requires hours of resting and rising, then a few minutes of stretching and folding before another rise. I loved walking past my ball of dough rising on the counter—it gave me a feeling of both deep belonging and nostalgia.

The results were indeed tasty. I began to look forward to that first slice of warm bread from my weekly bake. My daughter grew until she was old enough to taste the bread. Now she’s old enough to help me bake it, too.

“There’s something about sourdough, on both a physical and spiritual level, that’s life-changing,” Raffa told me. I think I understand what she means. I love knowing where my bread comes from, and being such an integral part of its journey from a lump of flour to nourishment at my dinner table.

Last summer, a few of my neighbors started baking sourdough. I had finally let the starter from my sister go, after a month-long trip to Europe during which it had fermented beyond use in my fridge, so I took a jar of starter home from one neighbor. After it had been fed for a few weeks and doubled in size, I gave some to another neighbor. Before we knew it, there were six or seven of us baking bread from the same sourdough starter!

We would send one another pictures of our loaves (some rounder than others) and laugh together about our mishaps in the kitchen. Some of these neighbors were already good friends, but for a few of them, sharing a sourdough starter gave us a new point of connection—a way of coming together even as we baked in our separate kitchens.

Sourdough baking has become increasingly popular during this season of social distancing, as evident on social media, and I think it is in no small part due to the fact that its starter can be shared.

As Raffa said, “food, by nature, is meant to be shared. Once the pandemic hit, sourdough became a bridge that connected families, friends, and total strangers all over the world. Because sourdough is not a static craft, the connection and community will continue to evolve for years to come.”

Raffa’s own sourdough starter, a portion taken from Celia’s starter, named Priscilla, connected her to a large pool of other people. “Through Priscilla,” Raffa writes on her website, “which Celia has graciously shared with hundreds, if not thousands of people all over the world, I became part of an international family tree of bakers!” Their shared love of sourdough fostered a real-life connection: Raffa and Celia were able to meet in person for the first time in Sydney two years ago.

When my sister brought me that first loaf of sourdough, she extended that thread of bread into my life. I’ve been able to pick up that thread and connect it to my own home and children, and to my friends and neighbors, and as I’ve done so, I’ve learned that it’s the people who make the food important as much as the food itself.