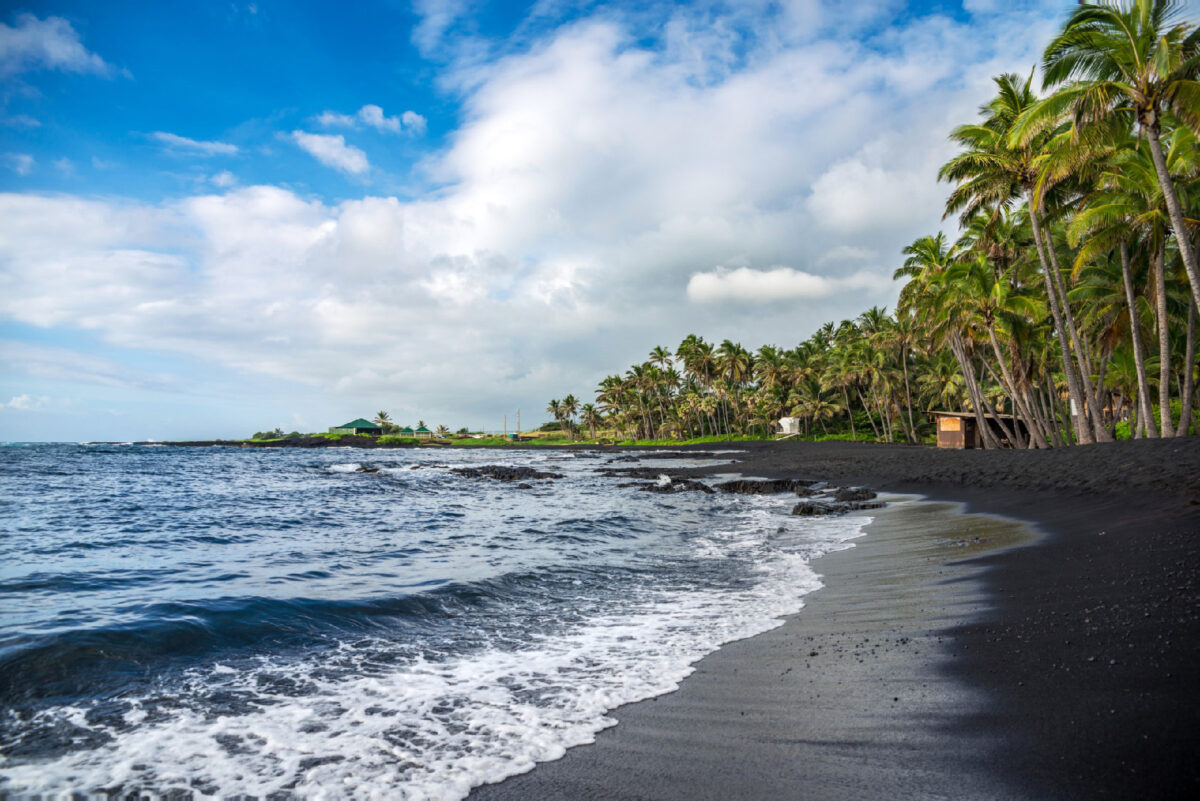 The Kilauea Volcano on the Island of Hawaii puts on a light show at nighttime. (Photo courtesy of Victor Block.)
Travel

Find a Landscape You Love on the Island of Hawaii

Some vacationers soak up sun on beaches with white or black sand. Not far away divers suit up for a deep dive to get close-up and personal with a variety of denizens of the deep. Other people check out a surreal moonscape of hardened pitch-black lava, then hike through a lush tropical rainforest.

If this sounds like a continent-wide choice of activities, that’s because the island of Hawai’i (as locals spell it) in ways resembles a miniature continent. It’s almost twice the size of the other Hawaiian Islands combined. Visitors find a setting that encompasses virtually every kind of landscape. Dry, cactus-dotted desert lies near lush rainforests. Barren lava fields contrast with waterfalls plunging into verdant valleys.

People in Hawai’i Volcanoes National Park come face to face with the world’s most active volcano, Kilauea, and most massive active subaerial volcano, Mauna Loa. It has erupted 33 times in the past 75 years, most recently in 1984.

In recent times, Kilauea erupted from 1983 to 2018. During the 2018 blow, lava flows added more than 875 acres to the island and created a black-sand and pebble beach.

Visitors can view the newest eruption’s billowing plume of gas and steam by day and bask in the reflection of glowing lava deep within the crater after dark. The hours from 10 p.m. to pre-sunrise are the best times to avoid large crowds.

Hawaii Island’s massive mountains also have another claim to fame. From its base on the ocean floor to the summit at more than 13,800 feet, Mauna Kea is taller than Mount Everest. Because of their heights, the peaks of both Mauna Kea and Mauna Loa are blanketed by snow at times during winter.

Several attractions greet people taking the Crater Rim Drive through the national park. The Kilauea Overlook provides awe-inspiring views of the Kilauea caldera, the collapsed center of the volcano, and the Halema’uma’u crater. Ha’akulamanu is a thermal area where volcanic gasses deposit colorful sulfur crystals and other minerals. The aptly named Devastation Trail leads through an area that was buried beneath a covering of cinders during a volcanic eruption in 1959.

People driving in the park are cautioned to be on the lookout for the nene, which is the state bird of Hawaii. This is the rarest species of geese in the world and, found only in Hawaii, it is designated as threatened. Visitors are warned to drive with caution and not to feed the birds.

Along with volcanoes and the usual sun-and-sand vacation activities, there are plenty of other reasons to visit Hawaii Island. For fishermen, waters off its Kona Coast are known as the best in the world for catching giant blue marlin. An annual International Billfish Tournament attracts anglers from many countries.

Much bigger sea life drops by during whale-watching season from December through May. While humpbacks have top billing, it’s also possible to spot sperm and melon-headed whales.

For history buffs, the story of the island’s past is as intriguing as what greets visitors today. The earliest settlements were established by Polynesians who arrived after a long and treacherous ocean voyage in large double-hulled canoes. Estimated dates of their arrival span hundreds of years, from the fourth to the eighth centuries. Clues to the lifestyle of the ancient Hawaiian civilization abound. They include remnants of villages, heiau (temples), agricultural mounds and other archeological remains.

Some relics, such as royal fish ponds constructed to satisfy noble palates and petroglyph lava rock carvings have been preserved and incorporated into the grounds of hotels. The etched images depict humans, birds, and other recognizable forms as well as indecipherable lines and dots. Their precise meanings are unknown, but scientists believe that they record births, deaths, and other major events and perhaps include astronomical symbols.

One of the more intriguing sites is the Pu’uhonua o Honaunau National Historic Park, a reconstructed royal compound. Known as the “Place of Refuge,” it served as a sanctuary for people who broke the kapu (sacred law). Transgressors who were able to reach this sacred place could seek safety and forgiveness. The compound encompasses temples, burial places, petroglyphs, and other reminders of ancient times.

Another chapter of island history comes alive in the Waipi’o Valley, a 6-by-1-mile gash in the land rimmed by 2,000-foot-high cliffs over which numerous waterfalls cascade. The meandering river they create gave the valley its name, which means “curved waters.”

Also known as “Valley of the Kings,” it once was home to many rulers of Hawaii and contains remains of important temples. Visitors can view the valley from a small overlook.

In contrast with the panoramic view over a deep valley is the opportunity for a look at the stars as few people have seen them. Because of the clear skies and without the impairment of city lights, the stars resemble sparkling glitter that has been scattered overhead. While the spectacular light show may be enjoyed from sea level, the best star-gazing opportunities are offered by tour operators from a 9,200-foot elevation on Mauna Kea.

An opportunity to peer at stars in a way that few people have isn’t the major reason why most people visit Hawaii Island. It’s but one in a long list of attractions that appeal to various interests well beyond the beaches, no matter what the color of the sand.