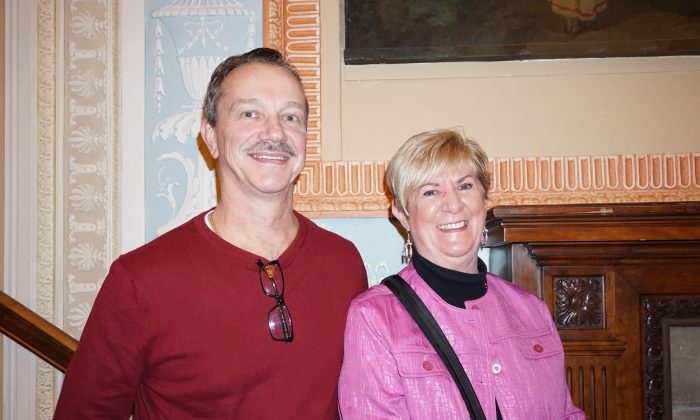 CLEVELAND—The power of Shen Yun Performing Arts often leaves its audience members in awe. This was the case for JoAnn Salmajs, who saw the world-renowned performance on Jan. 30 in Cleveland at the State Theatre.

“It’s amazing,” said Mrs. Salmajs, also the former finance director at the Cleveland Clinic. “The costumes were just spectacular. I loved the music. They must have to be gymnasts to be in this show!”

Classical Chinese dance is especially what Shen Yun is known for. The richly expressive dancing allows for storytelling through the dancers’ movements. These may be very subtle, but also include difficult aerial and tumbling techniques like flips, spins, and leaps.

Mrs. Salmajs was surprised by the dramatic pieces offered by Shen Yun. “I’m very, very interested in what they are portraying, I didn’t expect that. I just thought it would be an entertaining show,” Mrs. Salmajs said. “It’s not only entertaining, it’s educational. It taught me about the Chinese culture and things in the past.”

A Shen Yun performance, according to its website, seeks to bring back the once-glorious culture of China—once known as the Divine Land. It does so by featuring some of the world’s top dancers, combined with a unique orchestra that mixes both Eastern and Western music, and one of the more innovative backdrops ever seen, which uses digital projection to create vivid, animated settings.

For millennia, Chinese society was built upon principles from Taoism and Buddhism, and the culture was said to have come down from the heavens.

Through the universal language of music and dance Shen Yun takes its audiences on a 5,000-year journey of that lost Chinese culture—a culture that’s been nearly eradicated over the last half-century of communist rule. Government-initiated campaigns like the Cultural Revolution set out to uproot those old beliefs and destroy those treasures as if to erase the rich culture from the annals of history forever.

“We are so fortunate in America,” Mrs. Salamjs said. “We are glad that they are able to present this for the people in America so we can understand something about the culture.”