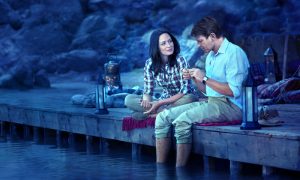 America loves its time-loop movies: “Groundhog Day,” “Edge of Tomorrow,” “Palm Springs,” to name a few, and even “Back to the Future” has time-loop elements. Arriving in time for St. Valentine’s Day, “The Map of Tiny Perfect Things” adds a quirky, fun, teen comedy-romance entry to the genre.

He’s Got It All Wired

Mark (Kyle Allen) is a Ferris Bueller-type high schooler from Fairhope, Alabama. He seems awfully prescient. In fact, he seems like some kind of advanced honor student who really ought to already be at MIT or something. But not in an academic sense. It’s just that he’s got exquisite timing. He does stuff like breezing into the kitchen for breakfast, snatching the toast exactly as it pops out of the toaster, staying a quick verbal step ahead of his derogatory little sister (Cleo Fraser), while blithely solving his dad’s crossword puzzle. Then he heads out the door, where more uncanny timing sequences occur.

Like ditching his bike for the bed of a moving pickup truck, snatching a serendipitous cup of coffee off the top of a car, bounding up a rooftop, and diving through a window to hang out with his bro Henry (Jermaine Harris), who seems to do nothing but play mercenary-bot-type video games where his merc-bot keeps getting its head shot off.

At this point, you will encounter a creeping sense of déjà vu. Where have we seen this before? We’ve seen it when Bill Murray’s snide weatherman Phil has been stuck down in Punxsutawney, Pennsylvania, for a few centuries. You know what I’m talking about.

Mark has a version of Phil memorizing all of Rita’s (Andie MacDowell) personal details, in order to string them into a dazzling, brilliant come-on, which inevitably ends with him getting slapped in the face. Mark’s version involves saving a girl at the local pool from the ignominy of getting hit in the head with a beach ball. But it doesn’t end with a slap, more of a rejection fizzle.

Mark, like Phil, though, knows that exactly 16 hours after his morning alarm goes off, when the clock strikes 12 a.m., there’s a massive reset and he wakes up in bed again, not hearing Sonny and Cher’s “I Got You Babe,” but his mom pulling away in her car for work.

Except one day, one of Mark’s routine timelines is unexpectedly bisected by a girl named Margaret (Kathryn Newton, “Three Billboards Outside Ebbing, Missouri”), who has her own daily time-loop sequence, also consisting of  benevolent minor-disaster interventions.

She’s elusive, though, but eventually he corners her with the line, “Are you experiencing any kind of temporal anomaly in your life?” Mark and Margaret join forces to figure out their mutual time dilemma, but not before she clarifies that she’s strictly off-limits: got a boyfriend, not even a little bit interested.

Mark and Margaret make it their mission to manufacture a magic map. What of? They scour their neighborhood to find all the tiny perfect things—delightful, exquisite synchronicities—such as big, bad bikers stopping traffic to let a box turtle plod unhindered across an avenue; a young skater girl outclassing a pack of “sk8terbois” with a perfect skateboard jump; and a man on a bus-stop bench, perfectly framed by the angel’s wings stenciled on a moving van behind him.

What’s all this supposed to do for them? They’re hoping that if they can successfully find all the eggs on this Easter egg hunt, they’ll have gleaned all the teachings this time loop has to offer and can move on.

Mark, of course, has the additional ulterior motive that this will all somehow win Margaret’s heart. But she keeps acting as if there might be some situation that’s compelling her to hang out indefinitely in the time loop. It doesn’t seem to be the boyfriend. And then you go, “Ahhh—I know what this is. This is another “dying girl movie.” Maybe it is, maybe it isn’t. I’m not saying.

The two loop-castaways bond and share their ideas, theories, fears, and hopes, and you root for Mark to figure out Margaret’s mystery. But while Kyle Allen as Mark is a perfectly fine workaday casting choice, Kathryn Newton is already at the level of stardom that should she land that one perfect role, it will elevate her into the fame stratosphere overnight. And so hers in not an everyday level of charisma—she owns this film.

Enjoyably, “Map” isn’t just a tale of a lovelorn boy in pursuit of hard-to-get girl, trying to get back to the future. It gives one food for thought, with surprisingly deep questions about time, space, loss, gain, love, and existential meaning.

Of course, none of these time-loop movies can satisfyingly explain quantum leaps, wormholes, reincarnation, and so on. But they do continue, if not exactly to teach, then to expand our minds a little bit to the point where many people today believe in things like “The Akashic Chronicle,” which has been talked about since ancient times. It’s now showing up in kids’ cartoons like Jim Carrey’s “A Christmas Carol.”

The best thing about the movie, given the rapid, morally down-sliding times we live in, is that here’s a movie about two attractive teens who spend their time trying to do only good deeds. OK, it does have a tiny bit of teen beer-drinking. And an extremely innocent kiss.

But the time-loop construct also begs the question of whether it makes sense that such a loop could exist with zero karmic consequences. Because how realistic is it to think that, in a situation where you could get away with everything under the sun with no karmic blowback, after boredom sets in, the situation wouldn’t rapidly deteriorate morally? Idle hands are the devil’s workshop, and after finding all the tiny perfect things, the kids, I don’t care how good they are, after another 100,000,000 go-rounds, will be looting, fighting, spraying graffiti, hoovering up drugs, raping, pillaging, and killing. And, as Bill Murray’s Phil found out—even that gets boring.

So this movie highlights for us the need for the lessons of karmic checks and balances in human existence, because the modern time-loop movie is really a metaphor for human reincarnation and karma. Which is different from “The Akashic Chronicle,” which, as its name implies, is basically cosmic record-keeping. All that occurs, in all the myriad time-spaces and levels and dimensions and worlds throughout the cosmos, is chronicled in the form of repeating messages and visual records (visual for those with the supernormal ability of clairvoyance) of deeds done in the past, present, and future. They’re just messages. Just “time loops.”

All in all, if “The Map of Tiny Perfect Things” were a tiny bit more, hmm … I don’t know … if the chemistry between the two leads was electrifying, and the soundtrack super catchy, this would have been a time-looper for the ages. But as a fun Valentine’s Day watch or for a romantic evening, you could do much worse.