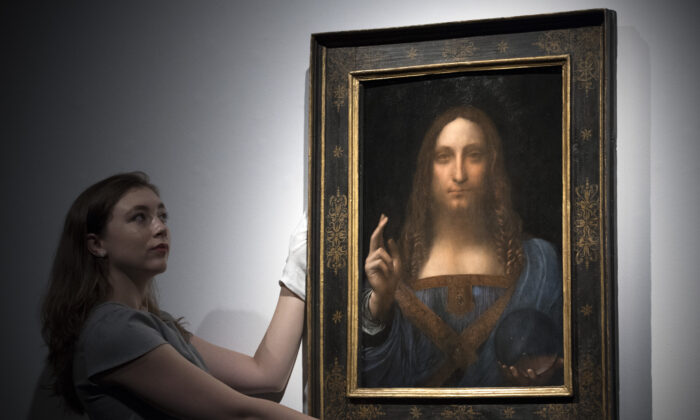 “The great design of art is to restore the decays that happened to human nature by the Fall, by restoring order,” English critic John Dennis wrote in 1704.

Leonardo da Vinci’s “Salvator Mundi” painting, by its very title—Latin for “Savior of the World”—fulfills Dennis’s description of great art. In the painting, Christ is giving a blessing with his right hand, while holding in his left hand a nonreflective sphere that represents the universe. It’s a painting that has been copied widely, but the original was thought to have been long lost.

Interestingly, according to preeminent art restorer Dianne Dwyer Modestini, no known records from Leonardo’s lifetime mention the painting, although he did render two studies of Christ as the Salvator Mundi.

Sony Pictures Classics’ recently released documentary “The Lost Leonardo” charts the rediscovery of the celebrated painting from when the artwork was discovered to its restoration and attribution, the different expert opinions, and its subsequent sales.

“The Lost Leonardo” is one well-made, fascinating documentary that I never want to see again. If you love learning about the politics and business behind great art, this film is for you. But if you appreciate Leonardo and sacred art in and of itself, the film may disappoint: It exposes the murky world of art.

Led by Danish director Andreas Koefoed, the documentary team spent three years compiling intriguing expert interviews, which are deftly tied together to create a peek into the opaque art world.

Early on in the film, I realized that even though the focus of the documentary is the painting, the fervor around it isn’t so much about art but about human nature itself. And some of the human behavior around the rediscovery, marketing, and sale transactions of Leonardo da Vinci’s purported painting beautifully demonstrates how far humankind has fallen.

Oftentimes, it isn’t the pretty side of human nature that is on display. It is instead the “decays,” the greed for fame and money, and the underhanded dealings, depending on how you view business etiquette.

The film also highlights important issues in the art world. It demonstrates how the opinions of renowned art experts, auction houses, art galleries, and museums can be incredibly influential. It also hints at the agendas that may influence their decision making.

In the opening scenes of the film, art expert Alexander Parish is in what appears to be a storeroom full of artworks of all manner of sizes and shapes stacked against the walls. Parish is a “sleeper hunter,” an art detective if you like, who fastidiously studies artworks that are about to go “under the hammer.” Ultimately, he’s hoping to find a work by a more prominent artist than it is attributed to in the auction catalog.

It was Parish and art dealer Robert Simon who discovered the “Salvator Mundi,” the so-called lost Leonardo, in a New Orleans auction house in 2005. The pair bought the painting for just $1,175. The face of Christ had been overpainted and restored. But both experts were interested in the parts of the painting that were untouched. Could those untouched parts of the painting be by Leonardo himself?

It’s almost unprecedented that an old master’s painting would surface in such a manner. There are fewer than 20 paintings attributed to Leonardo. It’s the kind of claim that puts professional reputations on the line.

If you’re a regular follower of art or current affairs, you may recall that in 2017, the same painting, albeit in a vastly restored state, was sold at Christie’s New York—as Leonardo da Vinci’s “Salvator Mundi”—for a world record breaking $450.3 million.

The rediscovery of Leonardo’s “Salvator Mundi” was, and continues to be, marred in controversy. Many experts still question whether the piece was painted by Leonardo or whether he was involved in its painting at all. “The Lost Leonardo” aims to show both sides of the story.

The film’s a whodunit of sorts, involving more twists and turns than a Dan Brown novel. You’ll question whether Leonardo painted it at all.

Those embroiled in the sale of the painting could be characters in Brown’s books too. There’s a Saudi prince, a Russian billionaire, a Swiss businessman, and even a former professional poker player. (Poker players close great business deals.)

Alongside the art experts, members of the intelligence community and investigative journalists all follow the sale of the painting with vigor.

The main institutions involved with the painting—the Louvre; Christie’s; Sotheby’s; The National Gallery, London; and Saudi Arabia’s Ministry of Culture—all declined invitations to comment in the documentary.

A Can of Art World Worms

Attributing the painting to Leonardo opened the proverbial can of worms. “Whenever there’s a lot of money involved, the world becomes like a bunch of worms intertwined, [like] when you pick up a rock,” art critic and writer Kenny Schachter says in the film.

Expert opinions were (and are) divided about the attribution.

“Expectations are dangerous; you end up seeing what you want to see,” Leonardo da Vinci expert Martin Kemp from Oxford University says in the film. He says he made sure he kept an open mind when seeing the painting for the first time in 2008.

Kemp was among five experts invited by curator Luke Syson to informally view the “Salvator Mundi.” Syson worked for The National Gallery in London. Controversially, Syson unveiled the painting in the 2011 exhibition as an autographed Leonardo. You’ll have to watch the film to understand why the decision was controversial.

In the film, we hear how Parish and Simon failed to sell the painting to world-renowned art institutions. The Dallas Museum of Art tried to raise the asking price. Another institution that Parish and Simon approached was the Gemäldegalerie in Berlin. Its former director Bernd Lindemann said in the film, “It’s not the role of museums to present a painting that is so heavily discussed.”

Eventually, Swiss businessman Yves Bouvier bought the painting on behalf of Russian billionaire Dmitry Rybolovlev. Unbeknownst to Rybolovlev, Bouvier made a tidy $44 million out of the sale. The plucky Bouvier is featured in the documentary and recounts how he’s now paying the price for being found out. Court cases are still active.

In 2017, Christie’s set about selling the painting that it marketed like a celebrity, with viewings in London, Hong Kong, San Francisco, and New York, much to Modestini’s opposition.

The result of the sale we know. Yet there are still many mysteries to the “Salvator Mundi” besides its attribution. It’s speculated that the Saudi kingdom bought the painting to increase tourism to the country. Another twist features the Saudi prince, the French president, and the Louvre.

It’s unknown where the painting is currently held. Some say it’s in one of the world’s free ports, a series of art storage vaults at airports where the wealthy store art in transit, tax free.

“The Lost Leonardo” may just be a prophetic title for traditional art in our modern world. Great art does indeed, as Dennis says, guide us to human nature. Judging by the moneymaking surrounding Leonardo’s “Salvator Mundi,” we may have physically lost the painting (if it’s stuck in storage). But even more importantly, many of those in the film seem to have lost an understanding of the painting’s subject matter and why Leonardo would have painted it: to connect us to the divine and for us to become better people. I’d rather connect to this divine painting than see this well-made documentary about the murky art world again.