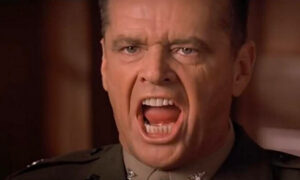 “The Green Knight,” a film adaptation of the Arthurian poem “Sir Gawain and the Green Knight,” is one of those languid, art-house-type moody tone-poem movies that cause critics to wax poetic and audiences to hate it. I’m with the people. Why? It’s boring! Zero tension. Pretty? Yes, but I insist of movies that they do not violate the No. 1 rule of show business: “Never be boring.”

Gawain (Dev Patel, yes, the Indian actor—this is the version where Indians and black folks lived in Great Britain in the 14th century) belongs to the court of King Arthur (Sean Harris) and hopes one day to be knighted. He’s got a woman named Essel (Alicia Vikander), whom he relegates to the woodpile due to her, er, lowly station.

On Christmas Day, the mysterious Green Knight (Ralph Ineson), looking like Groot from “Guardians of the Galaxy,” rides his mighty steed into the middle of the Camelot festivities and throws down a gauntlet: If any man can manage to even nick him with their weapon of choice, they get to win his giant green axe.

Seeing as how nobody wants to mix it up with this forest-y Brobdingnagian (talk about your Debbie Downers), Gawain, wanting to make his bones in this vaunted company, accepts the challenge.

And forthwith, Gawain choppeth off the head of said mystical knight!

A year goes by, and with all hope that it was just a game eventually fading, Gawain, honor at stake, sets out for the Green Chapel.

That’s Maybe Half the Synopsis

Basically, this is a becoming-a-man tale, on the surface of it. The director has woven a few unrelated Arthurian legends in with this Green Knight telling, but whether this is a pure telling or an enhanced one is unimportant. What it really is, is a tale of spiritual enlightenment—as are most of the Arthurian legends. Most fairy tales too.

Salvation communities such as the monasteries and nunneries of Christianity and Buddhism (and actually most humans prior to the Industrial Revolution) consider enlightenment to be the sole purpose of being human, and that is why there are so many stories thereof. “The Odyssey” is an enlightenment tale.

The biggest test is that at some point, Gawain reaches the castle of Bertilak de Hautdesert (known here as “The Lord,” played by Joel Edgerton), who is Gawain’s host before his arrival at the Green Chapel.

At The Lord’s castle, Gawain is submitted to tests of loyalty and chastity. The Lord sends his wife to seduce Gawain. He also proposes a bargain: He will give Gawain whatever creature he kills on his daily hunts, on the condition that Gawain give him anything that he might possibly gain during the day. Gawain accepts. The next day, the wife visits Gawain’s bedroom and tries to seduce him, but he allows her only a single kiss in his attempt to remain chaste (and also not to offend her). When The Lord comes home and gives Gawain a deer he killed, Gawain gives him a kiss, but doesn’t tell him where it came from. And so on and so forth.

Gawain tries very, very hard to remain chaste. In the movie version, he is, let us say, somewhat less successful. But that doesn’t necessarily mean what you think it means. In this endeavor, even a thought counts in the testing of one’s purity.

Will Gawain find the Green Chapel? Will he keep his head? Why are Essel and The Lord’s wife both played by Alicia Vikander? Are Indians and black people living in 14th-century Europe all that disturbing if you have a preference for naturalism, realism, and historical accuracy (which I do)? Turns out … not really.

In a nutshell, the main lesson—the gold nugget of wisdom—is as follows. Personally finding the topic of salvation deeply engrossing, what jumped out at me was the fact that at one point The Lord’s wife explains to Gawain that red … is the color of lust.

Why is that important? The critical line in the sand in terms of spiritual enlightenment is chastity. This is why it’s considered to be the most difficult challenge that humans can attempt. You want to become an immortal, a saint? The biologically embedded, procreationally necessary tendencies toward lust for the opposite sex (and especially for same-sex lust), and all thoughts about it—have to be overcome. Complete and utter purity of soul is the name of the game. This is why Saint Augustine famously said, “Dear God, give me chastity … but don’t give it yet.”

Whether this is the true message and distilled essence of the tale or not, what I enlightened to is that the Green Knight himself symbolizes purity and chastity. Why? Do you know what happens if you stare at a patch of red for an extended period of time and then suddenly look at a white wall? Your brain produces a powerful, ghostly phantom image of pure green. And so I interpret this as follows: Those who want to attain the state of chastity in spiritual enlightenment must strive to become green knights—the complementary color, and polar opposite color, of lustful red.

For in order to attain true immortality, all human things must be jettisoned. The 14th-century monks knew this. The Shakers knew it. We don’t know it at all today. But unless broody, moody, medieval-murky, mystical movies are your cup of tea, if you’re interested in this topic at all, I’d suggest reading some good books about it instead.