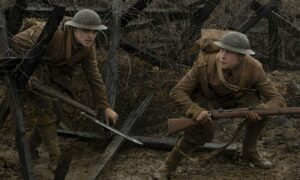 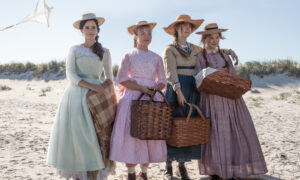 Film Review: ‘The Gentlemen’: Guy Ritchie Rests on Laurels and That’s Rather Fun

Ever watch “Monster Bug Wars” on YouTube? There is no purer form of horror. These bug predators, the giant spiders, scorpions, centipedes, fangs, snares, jaws, venoms … the scuttling … “brrrrr!” The brain is the human predator’s main weapon. Remember “Braveheart,” where Uncle Argyle tells young William Wallace that he has to first learn to use his head before learning to wield the sword? “The Gentlemen”—writer and director Guy Ritchie’s latest offering—is about a pack of cunning human predators out-thinking each other. Then again, that’s generally what Guy Ritchie movies are about.

The Tarantino-ish Ritchie debuted in 1998, immediately establishing a genre all his own—the hilarious, tough-guy, low-life, manly crime caper, exclusively cast with Cockney-speaking Englishmen. “Lock, Stock, and Two Smoking Barrels” was first out of the gate, followed by “Snatch,” “Revolver,” and “RocknRolla”—all of them hilarious.

Then, for Hollywood, “Sherlock Holmes,” “The Man from U.N.C.L.E,” “King Arthur: Legend of the Sword,” and “Aladdin.” The latter made a billion bucks. So now, as an established Hollywood player, Ritchie’s back to his roots with “The Gentlemen” and in fine, funny form, albeit with a slightly miscast Matthew McConaughey.

Mickey Pearson (McConaughey) is an ex-Rhodes scholar who converted his little college sideline (selling pot at Oxford) into a giant, underground (literally) weed empire. Literally underground because his farm is hidden underneath the high-class compounds of the British upper crust.

Pearson waxes self-righteous (in McConaughey’s inimitable, whistling Texas twang) to a heroin dealer: “My jam doesn’t kill anyone, and I like that.” Nevertheless, he’s tired of it all; he wants out and would like to sell his business to the slightly effeminate Matthew (Jeremy Strong).

But it couldn’t be that easy, because there would be no movie. So there’s a feeding frenzy that ensues: The Chinese and Russian mobs try to get their hands on Pearson’s pot, and so does Hollywood-bound tabloid reporter Fletcher (Hugh Grant), who attempts to extort Pearson’s right-hand man Ray (Charlie Hunnam from “Sons of Anarchy”).

The story is largely narrated to Ray, by Fletcher. He’s going to turn the whole story into a screenplay and sell it across the pond.

Coach is their mentor and attempts to give them direction. He’s perhaps the moral heart of the story. Farrell and his boys are the highlights of the film, along with the MMA crew’s social-media-posted reefer heist, replete with a dance number, parkour moves, and hilarious, catchy rapping about “boxes and boxes and boxes of bush.”

McConaughey, still best known for his pot-addled townie Wooderson in “Dazed and Confused,” showed the world a deadly, scary side in 2011’s “Killer Joe,” which is most likely what Ritchie cast him for here. McConaughey extols the virtues of hemp; McConaughey is almost synonymous with all things weed.

McConaughey can be both cold and vicious as well as charming, which is what Ritchie’s script calls for, but McConaughey’s missing the third necessary ingredient for this type of Ritchie role, namely—very funny. Although McConaughey can be very funny. But this was a Jason Statham role (who got his start in Ritchie films) if there ever was one.

Though slightly taken with itself, very Guy Ritchie-centric, this kind of tough-talking Brit miscreant tale smacks of the 1990s. And so a bit outdated. But we shouldn’t forget that when this genre was all the rage, it was Ritchie who put it on the map in the first place. The man can rest on his laurels if he wants to.