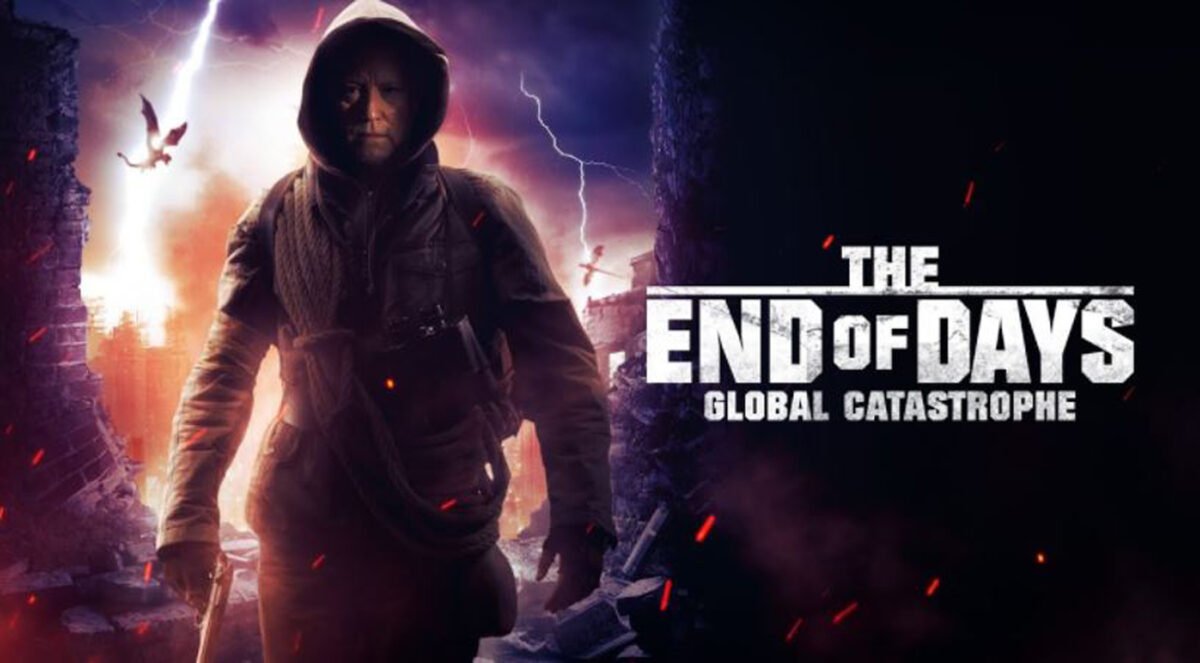 Disaster movies have been a mainstay of the world of cinema for decades. One could even argue that with all of the so-called “advances” in visual effects technology recently, Hollywood is churning out big-budgeted “end-of-the-world” films that seem to captivate the movie-going masses like moths to flames.

However, there are also many faith-based films that cover catastrophes on a global scale, but in a biblical sense. Instead of featuring big artificial-looking monsters (sorry, CGI still can’t render organic beings realistically) or meteors hurtling through space toward planet Earth, the end of days as described in the Bible is the real threat.

Speaking of which, a little faith-based film titled “The End of Days: Global Catastrophe” entails just that catastrophic event.

The film starts off with the main character, Hunter Wilde (Mike Norris, who also directs), talking with his friend Hunt Bonneau (Robert Guice). Since an electromagnetic pulse attack has struck the United States, scattered groups have banded together in rural areas. Hunter is dropping supplies off for Hunt who says he’s had to quarantine many of the people at his ranch because of a mysterious viral outbreak.

Suddenly, a group of terrorists attacks and Hunter engages in a running gunfight with them. He manages to survive and drives back to the safety of a small settlement called Crossroads, which he also built. There, he is greeted by his daughter Jo (Kat Rowland), Pastor Paul Wilson (Ted Ferguson), and a gaggle of other survivors living on the edge.

The compound is gated against physical threats, but there are also spiritual dangers lurking about. As Hunter points out in narration: “It feels like God left the gates of Hell open. Everyday supplies are scarce and safety is found in compounds inside of which fences and armed survivors keep at bay encroaching evil.”

As the band of survivors tries to live as normal a life as they can under the desperate and dangerous circumstances, a dark and sinister presence shifts in the shadows surrounding the compound. This primarily comes in the form of Dagon (Jordan DragonKing), an entity that is harvesting souls and now has its sights set on the compound’s survivors. Since Hunter is considered especially “stubborn” and “resilient,” he becomes the primary target. And if he falls, so go the rest of the survivors.

As the days roll by, Dagon manipulates the survivors into believing that Hunter murdered one of them, who was found hanged. Hunter, confused by the voices in his head (which is Dagon attacking his psyche), takes off in an effort to battle whatever dark forces are invading his mind and soul. Will he return to the compound? Or will he fall to the demonic forces arrayed against him?

One of the enjoyable aspects of the film is that it describes a world that could potentially happen. Even if you don’t believe in the biblical rapture, many of the themes in the film—such as EMP weapons shutting down power grids; foreign invasions, etc. are distinct possibilities.

Many of the characters aren’t at all predictable. For instance, although Pastor Paul is the compound’s spiritual adviser, he has his doubts about faith and doesn’t really provide much in the way of hope for his fellow survivors. He seems to be too preoccupied with wondering why God didn’t rapture them out and save their souls, especially since they are Bible-reading, God-fearing Christians.

Overall, “The End of Days: Global Catastrophe” has refreshingly non-preachy dialogue and a realistic premise. It goes to show that what a film might lack in budget, can sometimes more than be made up for with an interesting storyline, believable characters, and positive messages.