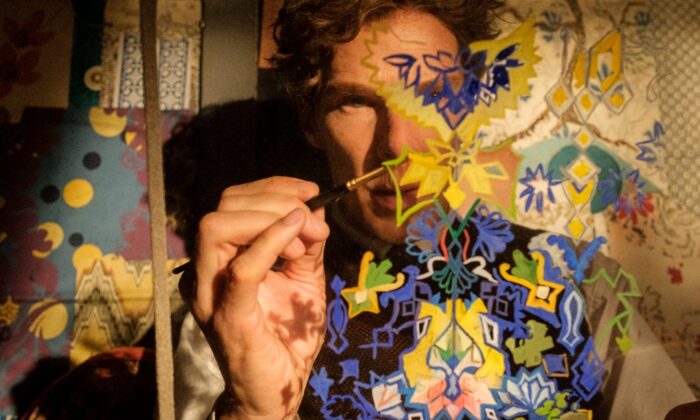 As the titular lead character in “The Electric Life of Louis Wain,” Cumberbatch delivers one of the most nuanced and wide-ranging performances of his life. Juggling mood swings, nervous vulnerability, subtle tics, and haunting, dark silences, Cumberbatch employs every weapon in his acting arsenal to portray the complex, troubled, and vastly talented Wain.

Born in London in 1860, Wain was the only male and the eldest of six children born into a modest middle-class household. At 20, after his father’s death and needing to help support his mother and sisters, Wain quits his teaching job and finds inconsistent success as an illustrator. His efforts are rewarded with indifference and only fleeting appreciation, especially from sister Caroline (Andrea Riseborough).

The chasm between Louis and Caroline only widens when he begins dating the family governess Emily (Claire Foy). She’s several years Louis’s senior (kind of uncool at the time), and the idea of Emily marrying into her employer’s family was strictly taboo in Victorian-era England.

The courtship itself is rocky. Louis has a severe case of fumble mouth and is beyond self-conscious about his cleft lip which he hides with an unwieldy moustache. Emily isn’t bowled over, but eventually comes to appreciate his devotion to her and the dedication to his craft.

The Family Cat as Muse

In the wake of a life-altering event, Louis’s career goes in an unexpected direction when he starts doing drawings inspired by the black and white family cat Peter. At this point in time in the U.K., cats were kept around merely as outdoor pest control, but the couple treat Peter as their de facto child and his presence provides a creative spark for Louis.

One of, if not the first artist to employ anthropomorphism (the practice of giving non-human subjects human traits—think dogs playing poker), Wain finds a niche that provides a decent living, but also adds further stress to his already fragile mental state. As with many creative types before and since, Wain is taken advantage of by publishers who pay him a mere fraction of the profits earned from the sales of his works.

Director Will Sharpe and his co-screenwriter Simon Stephenson skate along a razor’s edge with the narrative, which balances mental decline with an increase in artistic exploration. Wain was diagnosed with acute schizophrenia while he was alive, but modern-day psychoanalysis of his later output indicated that, because of his continued artistic growth, he didn’t fit into the split-personality cubbyhole. Wain was obviously someone who worked outside the margins, and his output supported the oft-subscribed-to notion that all artistic geniuses are at least a tad off-kilter.

Wain was more than a bit unbalanced, but the filmmakers never inject their opinion on whether it was due to true mental illness or simple garden-variety eccentricity. As little is known of Wain is his later years, this was a wise narrative decision. It also opens up the door for Cumberbatch to let fly with his A to Z performance, which allows the audience to come to their own conclusions.

Some could argue that Cumberbatch is trolling for awards consideration; nothing impresses Academy voters more than performances of the “mentally-challenged” (Cliff Robertson in “Charly,” Tom Hanks in “Forrest Gump,” Dustin Hoffman in “Rain Man,” and Anthony Hopkins in “The Father” from last year).

To Cumberbatch’s credit—and speaking to his dedication of his profession—isn’t doing anything here for “show.” Yes, he’d surely like to receive an Oscar nomination (who wouldn’t?)  and might do so twice this year (with the soon-to-be-released “The Power of the Dog”). He’s still a (relatively) young man whose performances only become more impressive with advancing age and the further honing of craft.

It’s terribly disheartening that most people only know of Cumberbatch through his four (with two more on the way) appearances in the Marvel Cinematic Universe movies playing “Dr. Strange.” The body of work he has amassed—not only in film, but also theater, TV, and radio—borders on staggering. It is fully fitting that an actor so (thus far) underappreciated plays another artist who was stranded in the same boat.