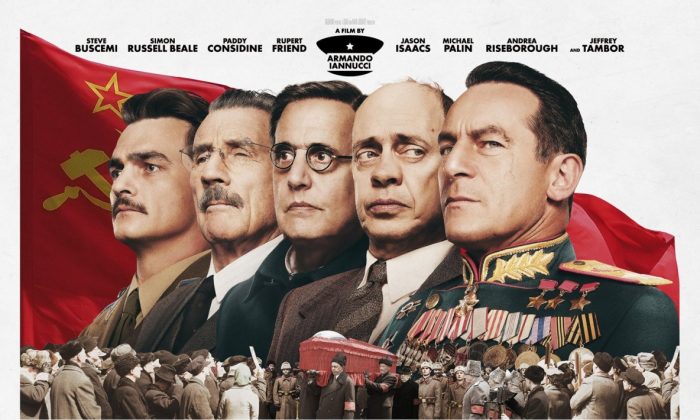 Film Review: ‘The Death of Stalin’

PARK CITY, Utah—Maria Yudina was such a brilliant classical pianist, she survived the Great Terror, even though she made no secret of her Orthodox faith and her contempt for Stalin’s brutal regime. According to a story mostly considered apocryphal, she was dragged back for a repeat concert performance, with full orchestra, after Stalin requested (demanded) a recording of her live radio broadcast of Mozart’s Concerto No. 23. That true-in-spirit historical legend inadvertently ignites a political crisis in Armando Iannucci’s “The Death of Stalin,” which screens during the 2018 Sundance Film Festival in Park City.

The poor, harried director of Moscow Radio does indeed call back Yudina and the orchestra to accommodate Stalin’s whims. She is not inclined to be so agreeable, but her participation is quickly purchased. It is also an opportunity for her to slip a personal note of pointed condemnation to Stalin, who is so surprised to be criticized in such terms, he has a massive coronary and dies.

Of course, this ignites a power struggle within the Central Committee. Technically, the pompous Georgy Malenkov is next in line as the deputy general secretary, but the real contenders are Lavrentiy Beria, the sadistic chief of the People’s Commissariat for Internal Affairs (NKVD), and Nikita Khrushchev, the closest thing to a reformer in Stalin’s inner circle.

Thanks to his de facto control over Kremlin administration, Beria gets a jump on Khrushchev, hypocritically positioning himself as reluctant participant in the purges and a would-be liberalizer. However, Khrushchev will win over key allies, such as Field Marshal Georgy Zhukov and the dithering senior statesman, Vyacheslav Molotov.

Adapted from Fabien Nury and Thierry Robin’s French graphic novel, “The Death of Stalin” is a wickedly funny, pointedly scathing satire of corrupt power run amok. Frankly, the succession battle waged by Khrushchev and Beria ranks up there with the rivalry between Lok (Simon Yam) and Big D (Tony Leung Ka-fei) in Johnnie To’s “Election,” but Iannucci’s film has a higher body count—by a factor of at least 100.

Despite the mordant wit and subversive slapstick humor, Iannucci and his platoon of co-screenwriters make it chillingly clear what happened to inconvenient witnesses and 90 percent of the victims Beria swept up during the Stalinist Terror. It is hard to believe one can laugh so much during a film openly discussing torture and mass executions, but such is the case.

It is also hard to believe that, first, we can find ourselves openly rooting for Nikita Khrushchev and  that, second, pencil-thin Steve Buscemi would be the perfect actor to portray him, but both also prove to be true. In fact, Buscemi gives a tour de force, possibly a career-best performance as Khrushchev, with the help of a little stomach padding. Arguably, Iannucci’s conception of Khrushchev as a shrewd opportunist and a fount of nervous energy rather puts him in Buscemi’s wheelhouse.

Buscemi is perfectly counterbalanced by Simon Russell Beale’s wonderfully sly and flamboyantly sinister portrayal of Beria, which rather helps align viewer sympathies with Team Khrushchev. Jeffrey Tambor basically does his regular shtick as Malenkov, assuming he won’t be replaced by Christopher Plummer for the film’s American theatrical release. However, it is a real stitch to watch Jason Isaacs ham it up as Zhukov. Yet, maybe the best surprise in “The Death of Stalin” is a late-career comedic gem from Michael Palin as the astonishingly indecisive Molotov. Plus, Olga Kurylenko adds some class and poise as Yudina, while Andrea Riseborough gives it greater human dimension with her vulnerable and conflicted turn as Stalin’s future-defector daughter, Svetlana Stalina.

Satirizing a period of such widespread fear and suffering is a tricky business, but Iannucci and company pull it off with flying colors. “The Death of Stalin” manages to be absolutely hilarious and totally chilling, simultaneously. It is a terrific film, but don’t take my word for it. The Putin regime is considering banning it, so you know it must be good. Very highly recommended, “The Death of Stalin” screens again on Jan. 27 in Park City, Utah, as part of this year’s Sundance Film Festival.

Joe Bendel writes about independent film and lives in New York. To read his most recent articles, visit jbspins.blogspot