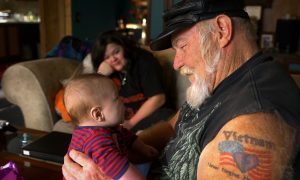 I love the sound of metal. That is, the unmuffled rumble of V-8 and V-twin engines of American muscle cars and Harley-Davidson motorcycles, respectively. I own a bike of significant loudness. I also used to drum in a rock band. I sometimes worry about … my ears.

Early in my riding career, like an addict needing a stronger fix, I took the baffles out of my exhaust pipes. Crossing Manhattan’s George Washington Bridge at rush hour was an immediate, literal power trip. When cars and trucks hear that infernal din encroaching on their six o’clock, they part like the Red Sea—you sail through an hour’s worth of traffic jam in ten minutes. It’s like having Thor’s hammer connected to your throttle hand. Loudness is power; power is addictive.

After a month of that, even with earplugs, my ears started complaining. I also realized I’d become one of those super-loud bikers people tend to hate. I put the baffles back in the pipes. But many Americans also love that sound and will stand at attention on their porch and salute you even if you weren’t in the military like you should have been. Hmmm … I should quit it. But I don’t wanna. Just yet.

When the Ears Can’t Handle the Profession

“Sound of Metal” is about a metal drummer (“metal” = a form of hard rock music) who loses his hearing. Ten minutes into the film, and after seeing the lead character experiencing familiar symptoms of hearing loss, I noticed a state of denial coming on; I suddenly didn’t want to watch it anymore. Luckily, I had a job to do.

Riz Ahmed plays Ruben Stone, a former heroin addict with bleached-blond hair and many tattoos, who drums in a White-Stripes-like two-person band with his girlfriend Lou (Olivia Cooke) who’s got bleached-blond eyebrows, and many self-harm cutting scars on her forearms.

They appear to have done rather well, living a nomadic life touring the USA in a well-appointed, cozy Airstream RV that doubles as a recording studio on wheels.

When Ruben’s world suddenly goes silent after many ignored warning signs, their relationship, both personal and professional, is immediately on thin ice. Hearing tests are taken; there’s a possible expensive surgical option that Ruben, in a complete state of denial, decides will be a tidy fix to this temporary setback.

But Lou, recognizing the warning signals of an imminent addict-relapse stemming from Ruben’s heightened stress levels, insists he go another route. In the form of a rural farm-and-school community of recovering addicts who also happen to be deaf.

Fork in the Road of Life

The pervading philosophy of this community, espoused eloquently by deaf 12-step counselor and community leader Joe (Paul Raci), is that theirs is not a disability, and silence is a reality to be embraced—celebrated even—and not run from, especially not run from in the addictive state of mind that Ruben is displaying.

There’s an extended period of dissonance, when Ruben slowly acclimatizes and accepts his situation, learning a new lifestyle, sign language and all, of how to be deaf. Throughout most of the film, though, Ruben clings desperately to his old life, sneaking into Joe‘s office to research online, borrowing from Peter to pay Paul, obsessing, and contemplating selling his beloved RV for money to get the operation.

However, the seeds are planted early that this will be a spiritual journey. As it is said in faith-oriented literature: When one leaves the shore and heads out on the stormy seas (like the boats leaving the Grey Havens in “Lord of the Rings”), one should be prepared to not see land for a long time.

Meditation is introduced, along with the concept that if one can learn to embrace and cherish the deep, cozy silence—that gift will be forever. As opposed to the fickle and potentially addictive information coming to us through the five senses.

Will Ruben get the surgery? Will it resurrect his old life, such as it was, with the intense assault and battery of his ears?

Will he reconnect with Lou? Will there be a resolution of the dissonance? Will the journey into silence be completed—or will Ruben exit this movie in a cloud of Lou’s power chords and shrieked vocals, accompanied by his own drum-kit bash-ery?

Ruben is not an easy character to like: an edgy, hair-trigger temper in an aggressive, arrogant, dismissive, hyper type-A personality. It’s easy to be thoroughly annoyed with him until at least halfway through the film. If there was ever someone who has to learn the hard way, it’s him.

Armchair quarterbacking is easy; to roll one’s eyes when we can predict the outcome of certain actions is facile. Teaching is hard. And so it becomes easy, watching “Sound of Metal,” to appreciate the wisdom and patience of good teachers (like Joe) who can see the mistakes and the pain coming but don’t interfere in the process.

There’s also a sense that Ruben is trying hard to learn and change. And so Ahmed’s is a virtuoso piece of acting. He walks a fine edge of being off-putting and yet generating just enough likability for us to root for him.

Olivia Cooke as Lou is tasked, on the one hand, with the challenging portrayal of a woman with enough low self-esteem to have had self-harm issues, along with the codependent-addictive connection to an addict, and on the other, someone with enough self-awareness to try to evolve beyond her dependency on Ruben. It’s pretty masterful.

The third main character in this film is the sound design. It depicts and simulates how losing one’s hearing happens. It also functions as a powerful reminder for hearing people not to take life and its run-of-the-mill sounds for granted—coffee dripping, birdsong, wind, talking on the phone.

It brings to mind Albert Einstein’s observation that there are only two ways to live life: One is as though nothing is a miracle; the other is as though everything is a miracle. Part of the path of spiritual cultivation and evolution is learning to cherish everything in the moment for its miraculous wonderment. It seems like a no-brainer. But go have your hearing taken away by “Sound of Metal,” and you will go home with a heightened appreciation of the subtle noisescape around you.

The film also brings up the understanding that it’s only by way of experiencing hardship that we ever really change for the better. We often hear people say they wouldn’t trade their bouts with cancer for anything, knowing how far they were able to evolve spiritually. It’s the universal law of “No loss, no gain.” The riches hidden behind pain and sacrifice are always more desirable than the unawakened state. As Socrates said, “The unexamined life is not worth living.”

That said, should I maybe sell the bike … ? I feel like Saint Augustine, saying, “Dear Lord give me quiet pipes. But don’t give them yet.” Or was it chastity? I’m pretty sure it was chastity. Similar deal.