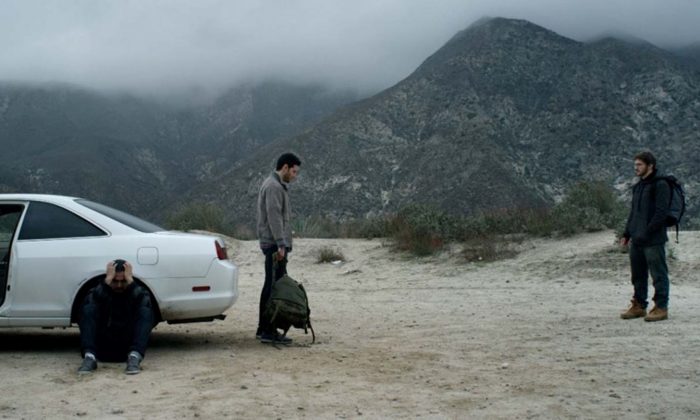 An indie thriller with an interesting premise
By Ian Kane

When it comes to movies, there are certain elements that can engender a viewer’s sense of immersion. Sure, character development, motives, backstories, and so on, are all factors that lend to building up our immersion. However, an often overlooked item that is usually only perceivable to very discerning moviegoers is characters making believable decisions.

Think of a typical horror or thriller flick in which people make totally incomprehensible decisions when faced with obvious danger. We’ve all witnessed these types of movies where people walk directly toward potential threats (such as foreboding, dark closets, or something clearly hazardous) instead of away from them. This can terminally derail any good setup a movie has built up to that point.

Director Kyle Schadt’s (“Sunland”) new indie thriller “Silent Panic” certainly has a great setup. Ex-con Eagle (Sean Nateghi, “Me, You, and Five Bucks”), Bobby (Joseph Martinez), and Dominic (Jay Habre) are a trio of buddies who are wrapping up a camping trip. As the chums get back to Eagle’s car, they get a nasty surprise—there’s a dead woman in the trunk.

“Look, I’m not comfortable callin’ the cops, and I think we all know why,” Eagle says right away, having served prison time for crimes he purportedly never committed. He believes he’ll be the first one to be blamed by overzealous detectives. The others are also confused and fearful of the repercussions of their recent discovery. Ultimately, they agree to remain hush-hush about the corpse, but that fateful decision eventually comes back to haunt them.

Schadt wrote the film’s script, and I found the premise simple yet relatable, at least at first. The dead body doubles as the film’s plot device as well as the main hook, begging the audience to consider what they would do in such a situation. It’s entirely believable, since this kind of tragic event is within the realm of possibility given a confluence of bad, bad circumstances.

But, as the saying goes, “There is nothing new under the sun.” That certainly holds true for film plots. In this case, a group of friends discovering and then trying to decide what to do with a corpse isn’t exactly an original plot. It’s been done before in films such as “The Loft” and “The Upper Footage.” However, coming across a random body that (spoiler alert) none of them had any involvement with, is a new twist on things.

The second act starts off strong, mainly powered by the reasoning of Eagle’s bad-boy past and his reluctance to contact the authorities. Soon, however, things begin to devolve into what resembles a melodramatic, made-for-TV movie. Scenes that may have seemed good on paper fall completely flat on the big screen.

One example of this is when Eagle’s girlfriend, Robin (Constance Brenneman), takes the corpse-car out shopping. From there, we are treated to back-and-forth cuts of Eagle cycling to the local stores in order to find her, and shots of her shopping. He’s got to get to her before she opens the trunk to store her shopping bags. What transpires is so mind-drubbingly unbelievable that it garnered some “yeah, right” guffawing from the audience.

As Eagle’s character becomes annoyingly unbelievable, his two cohorts don’t fare much better. Bobby and Dominic appear to be slightly more sensible than Eagle. But then one of them suddenly turns to drugs in order to deal with his stress, and things spiral out of control. This turn of events not only felt contrived and clichéd, but it also gave the impression that the filmmakers were becoming self-conscious of their rabidly disintegrating script and had to inject something “edgy” in order to prop it up.

The plot soon deteriorates from unbelievable to downright ridiculous when Eagle starts to go to totally irrational lengths to try and cover up a crime he never committed. Meanwhile, his egocentric nature and lack of compassion for the victim make him—as the main character—utterly unrelatable. I found myself rooting for his demise.

Unfortunately, “Silent Panic” falls into the ideological trap of promoting the idea of perpetual female victimhood. Why don’t we ever see any films that feature women finding dead men? It would be interesting to explore how they deal with similar circumstances. Now that would be original!

Or, as one reviewer wrote about “Silent Panic”: “Make the corpse male and go for laughs? Could have worked.” (“Weekend at Bernie’s” comes to mind.)

To the film’s credit, it does feature some solid cinematography by Jordan Rennert (“The Perfect Dose,” “House of Demons”), which captures the quiet sense of desperation (at least when Eagle isn’t blabbering) and eventual isolation that the characters find themselves in.