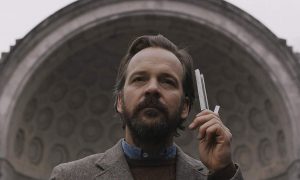 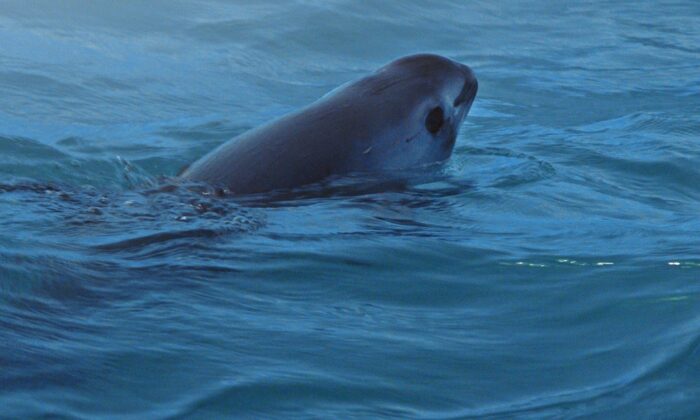 A vaquita, its species on the brink of extinction, in “Sea of Shadows.” (Terra Mater Factual Studios)
Film Reviews

When I was 17, I accompanied my father on a sailing odyssey from San Diego to Puerto Vallarta. After getting lost at sea, we made it back to the Baha coastline before beginning our voyage across the beautiful Sea of Cortez.

During the sail, dolphins would appear near the bow of our boat, thrusting their gray bodies in and out of the foamy swells. I saw other fish that looked like dolphins, but my father corrected me. “Those are porpoises; they’re closely related to dolphins,” he told me.

Looking back, I would have never imaged that the lush, marine life-abundant Sea of Cortez would serve as the stage for director Richard Ladkani’s new film, “Sea of Shadows.” When I initially read the title, I imaged a noir-crime drama or edgy political thriller, not a wildlife documentary.

Instead of covering illegal elephant poaching as he did in 2016’s “The Ivory Game,” Ladkani’s latest documentary (co-directed by Sean Bogle and Matthew Podolsky) serves as a similar call to action, but it focuses on another endangered species.

One of the most prized creatures of the Sea of Cortez is known as the totoaba. These are large marine fish that contain gaseous swim bladders, revered in China for their circulatory- and fertility-enhancing properties.

Mexico officially outlawed totoaba fishing in 1975, after the totoaba had been overfished. But that didn’t halt China’s demand for the fish’s bladders, which are apparently so potent in their medicinal properties that they’re nicknamed “the cocaine of the sea.”

Enter a dark alliance more sinister than any crime-thriller Hollywood could ever dream up.

In an effort to fill China’s voracious appetite for totoaba bladders, the Sinaloa drug cartel joined forces with the Chinese mafia in Tijuana. This unholy alliance has fueled rampant illegal fishing of the totoaba, which, in turn, has led to an unexpected and even more pressing issue.

Caught in the nets of the gulf fishermen is the world’s most endangered marine mammal, a species of porpoise called the vaquita. As these beautiful animals are entangled in the nets and drown, their numbers have drastically fallen to the lower double digits.

The Good Guys and Those Caught in Between

The film opens with the brave men of the Sea Shepherd, who risk great peril in order to locate bands of poachers. Weaponless, the vessel’s crew, including intrepid drone pilot Jack Hutton, sends the coordinates of any successfully tracked poacher’s ship to the Mexican navy, in the desperate hopes that the military will actually do something.

But there’s a lot of money flowing around the gulf. Dogged Mexican journalist Carlos Loret de Mola knows all too well of the illicit funds trickling through his country. Although he covers stories that link government and industry figures who are in the pockets of Mexican cartels and Chinese traffickers, and broadcasts these reports to millions, little seems to ever get done about the increasingly dire situation.

But don’t tell that to Andrea Crosta, the executive director and co-founder of Earth League International (ELI). Many of ELI’s employees are intelligence professionals and former law enforcement personnel who engage in covert operations in order to investigate the illegal poaching and its ties to China. A dangerous task, to say the least.

Then there are the stories of the local Mexican fishermen, who aren’t allowed to use the fishing nets that they used in the past. Their need to feed their families is very real and conflicts with a need to save the fisheries, and likewise threatens the overall sustainability of marine life in the area.

There’s also the conservationist perspective, embodied by veterinarian Dr. Cynthia Smith. An American with the lofty goal of somehow corralling and capturing a few of the remaining vaquita, Dr. Smith hopes to relocate any of the endangered sea mammals she can, in order to nurture them back to a decent population level. However unrealistic her goals may be, you can see the unwavering passion that this woman is imbued with.

The film made me curious about elements that it merely touches on. Why are there so many Chinese criminal elements in Mexico? How long have they been aligned with Mexican drug cartels?

I feel as though there could be an entire feature documentary or, even better, a reality TV series solely dedicated to investigating these murky, transnational matters.

In any event, “Sea of Shadows” is a wrenching exposé on a little-known species of porpoise that is fading out of existence—as Crosta calls it, an “extinction in real time”—and the people who are, against all odds, trying to stop that from happening. The film makes it clear that the good guys are vastly outnumbered by the bad guys.

But in what war worth fighting for have the numbers really mattered?