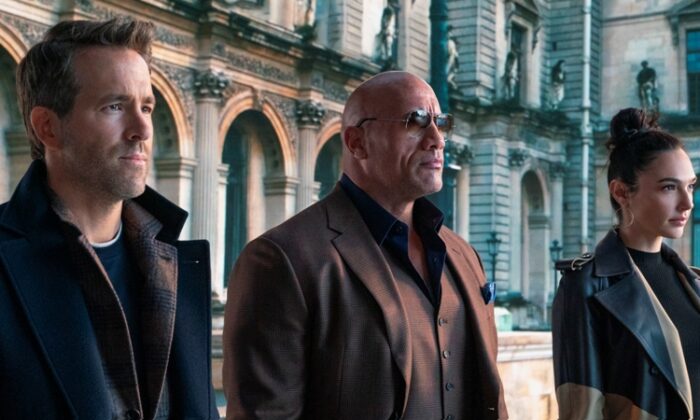 Reportedly these three blockbuster stars got $20 million each to appear in “Red Notice.” (Netflix)
Film Reviews

Three of the hottest performers in the movie business right now—Ryan Reynolds, Gal Gadot, and Dwayne Johnson—have worked as part of ensembles (the “X-Men,” “DC Comics,” and “Fast & Furious” franchises) before, but are usually solo leads in their other ventures. To get all three of them to star in a non-superhero or drag-racing-cum-espionage flick is a considerably big deal— and costly.

With each of them receiving a reported $20 million salary, the budget for the new action comedy “Red Notice” has been estimated to be between $160 million and $200 million, making it the most expensive movie in the history of Netflix. Considering it will be exclusive to theaters for only six days before it begins streaming, that’s a huge financial gamble.

A hybrid of dozens of other comedic heist flicks as well as “Romancing the Stone,” “The Man from U.N.C.L.E.,” and “Raiders of the Lost Ark,” “Red Notice” is a shameless, unabashed, and almost proud derivative effort (one scene features a character whistling the main theme from “Raiders”).

Recycling is nothing new in movies and, in fact, is beyond commonplace and preferred. The secret is to make it look and feel, if not fresh, at least fun and engaging, and “Red Notice” does so and then some.

Writer and director (and now three-time Johnson collaborator) Rawson Marshall Thurber fully utilizes the bloated budget by hop-scotching all over the globe with elaborate, James Bond-scale set pieces and they look spectacular.

As is required in these types of affairs, there are foot, land, water and air chase scenes accompanied by heavy gunfire (with no graphic carnage) and exaggerated explosions. For that reason alone, interested viewers should see the movie on the biggest screen possible.

The MacGuffin in the film are three (fictional) ornate, Fabergé-style, football-sized eggs given by Marc Antony to Cleopatra, which are priceless. Two are accounted for and the search for the third provides the springboard for the plot.

Who exactly wants to ultimately take possession of the eggs is made clear, but anyone with even a minor understanding of global stolen art law will identify this portion of the story as totally implausible. This unneeded sub-plot is the only glaring and problematic chunk of the narrative.

Thurber wastes no time getting into the action. After an opening title credit sequence explaining the back-story of the eggs, we meet Interpol agent Urvashi Das (Ritu Arya), who does not believe what she’s being told by FBI agent John Hartley (Johnson). He claims the “third” egg being exhibited at an Italian museum is a fake. Recognizing that international art thief Nolan Booth (Reynolds) is among the patrons, Hartley pursues him on foot and then oh-so-briefly in a car, all to no avail.

It turns out that Booth is a better escape artist than he is a thief. He’s broken out of jail six times before and seems to be addicted to that peculiar rush, something that will come in handy later on.

For reasons better explained by the screenplay, Hartley and Booth are sent by Das to a remote Russian prison where they meet Sarah Black, also known as the Bishop (Gadot), another thief who is always one-upping Booth. She’s not a fellow prisoner, but rather a civilian bribing the warden into doing her bidding.

Gadot Breaks Away From Wonder Woman

Equal parts vamp, sadist, and tough-as-nails manipulator, the Bishop is the most unlikely character rendering anyone might expect from Gadot; it will go far in dismantling what could have been career-crushing typecasting as she’s played Wonder Woman in the now four—and likely more—D.C. Comics blow-outs.

Although on-screen slightly less than her co-leads, Gadot steals every scene she’s in—no mean feat when considering the combined off-beat charm and presence of Johnson and Reynolds.

For his part, Reynolds unleashes a torrent of flip, snarky, razor-sharp one-liners which are more-or-less riffs on his “Deadpool” character. For example, when asked by someone how painful something might be, Booth compares it to “watching Vin Diesel’s audition tape for ‘Cats.’” Seeing how integral Reynolds’ comic timing was to the overwhelming success of the “Deadpool” franchise, this is actually a huge plus.

It is unlikely that Johnson would ever show up on most people’s “best actor” lists, but he is a smart guy who recognizes his thespian limitations and makes the most of his limited strong points. Not an inherently gifted comedian, he’s fully aware that great comedy requires a convincing straight man or frustrated foil and on that level, he’s top-notch.

The generic, ephemeral, almost forgettable title isn’t explained until the final scene (which also clearly lays the groundwork for a sequel), and it would be a major drag if at least one more installment wasn’t at least considered.

Should Actors Rethink their Salaries?

The problem is, we now live in an instant-gratification world (and operate within a ridged and unforgiving business model) where, if something doesn’t totally crush it on opening weekend and cover its budget in less time that it would take for milk to curdle, it will be considered a box office failure.

It doesn’t help matters that the star’s salaries and bottom-line costs for this film make the probability of a follow-up highly improbable.

Had this movie been released prior to March 2020, its financial success would’ve been almost assured. In this new, post COVID-19 world, probably not. It might be time for on-screen talent to get with the revised program and base their compensation on actual profits.

Don’t count on that happening any time soon.

The movie opens in theaters on Nov. 5 and starts streaming Nov. 12 on Netflix.