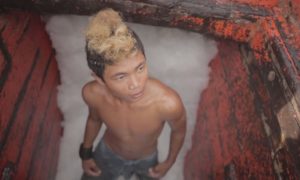 Film Review: ‘Luce’: Can a Former Child Soldier Be Raised to Not Perpetrate a School Shooting?

Mick Jagger nailed the state of the nation, nay—the world—in 2019, with his description of New York City in the Rolling Stones’s 1978 song “Shattered” (my condensing and rearrangement):

Shattered. Life’s just a cocktail party on the street. Friends are so alarming; all this chitter-chatter, people dressed in plastic bags, directing traffic, don’t you know the crime rate is going up? Rats on the West Side, bed bugs uptown, what a mess, pride and joy and greed and sex and loneliness and sex and sex; my brain’s been battered, money grabbers, bite the Big Apple, don’t mind the maggots.

America’s got so many problems! Racism, sexism, LGBTQ issues, immigration and border wall issues, Navy SEALs partying too much, billionaire pedophiles, #MeToo, antifa, school shootings, Russia collusion, global warming, socialism on the rise … It’s all just so not great. I’m all for making it great again.

So what’s this bombastic lead-in have to do with a little movie called “Luce”? This film adaptation of an Off-Broadway play (JC Lee) puts racism, prejudice, and terrorism in your face and postulates that these are the premier issues that need resolving—before America can become great again.

However, “Luce” does this in a complex and sneaky (but good) way, such that it tempts us down our usual knee-jerk pathways to our particular phobias, notions, and prejudices; and just when we think we’ve got it all figured out and we’re comfortable, it whips the rug out from under us, and exposes all the ways we’re biased.

It shows us what we have to work on in order to become great. Because the problem always starts within. At the end of “Platoon,” Charlie Sheen’s character Chris Taylor says, “I think now, looking back, we did not fight the enemy; we fought ourselves. And the enemy was in us.”

Luce (Kelvin Harrison Jr.) was born in war-torn Eritrea but was adopted by well-to-do white American parents (Naomi Watts and Tim Roth). They couldn’t have their own kids, but they wanted kids so badly that they were willing to put in the years of therapy and counseling it took to rehabilitate a massively culture-shocked former child soldier.

Is that premise perhaps a bit extreme? Is it realistic? Who does that? Suffice it to say, they did, and ostensibly succeeded. Luce is a model student: captain of the track and debate teams, and senior class valedictorian.

However, one day, teacher Harriet Wilson (Octavia Spencer) assigns a writing project. Students are to write in the voice of a chosen author. Luce chooses communist Frantz Fanon and writes some radical, terrorist-sounding stuff. He writes convincingly enough to cause Mrs. Wilson to freak out and search his locker. Eureka—she finds a bag of dangerous illegal fireworks.

So, scary writing, plus scary fireworks, plus a violent youth automatically equals a red flag in this teacher’s mind, and she calls in Luce’s mom, Amy, for a meeting.

It should be noted that both Mrs. Wilson and Luce are black. Is this perhaps some kind of black-on-black … something-or-other?

It all gets very hypothetical. What do we really know? Are our perceptions accurate? When presented with certain scenarios, what’s our go-to interpretation? This is the main message and teaching piece of the film.

Did Mrs. Wilson overstep her bounds? Was she validated in trashing Luce’s privacy and invading his locker? As it so happens, she’s done this before, confiscating a bag of weed from black track jock DeShaun Meeks’s (Astro) locker, which resulted in DeShaun getting booted from the team along with being divested of his college scholarship. Again, is this black-on-black prejudice?

One thing’s for sure: Until you see how Luce deals with the massive controversy swirling about him, you haven’t understood the meaning of the phrase “passive aggressive.” For example, instead of confronting Mrs. Wilson, he invites her to sit in on one of his debate-team rehearsals, and with a beatific smile on his face, ruthlessly cross-examines her, while other teachers bear witness.

All the track-team boys share their lockers. Oops. Many different possibilities of the actual guilty parties. Maybe the weed wasn’t DeShaun’s? Maybe the fireworks weren’t Luce’s? Then again, can we blame Mrs. Wilson for making a pre-emptive move? After all, school shootings are not something to be taken lightly in this day and age.

But the point is not so much what Mrs. Wilson didn’t know; it’s about what we the audience don’t know, because we never get all the pertinent information. It’s a barometer on the state of our tendencies to jump to conclusions before getting all the info.

Another instance of this kind of fact obfuscation is Luce’s girlfriend Stephanie Kim’s (Andrea Bang) description of a drinking game, at a party during which she was track-team groped. Did Luce rescue her? Or was he perhaps one of the participants? Or maybe even the sole participant? And was it maybe more than groping? Luce’s and Stephanie’s stories don’t match, but both of them come off as completely believable.

So we’ve got Mrs. Wilson as a possibly prejudiced, scheming, diabolical teacher; Luce’s parents as off-the-charts-liberals/progressives (at least his mom), willing to go above and beyond in giving Luce the benefit of the doubt; and Luce himself as a possible sociopathic master manipulator.

However, the young man is under enormous pressure. He, as well as Mrs. Wilson, knows he’s got to try harder than most to meet the standard of the surrounding white community’s expectations of him.

They say “write what you know,” and since Julius Onah, the film’s director, was born in Africa and grew up in Arlington, Virginia, where the film takes place, this is a case of “direct what you know.” And there are naturally parallels to the Obama story: Much was expected of Obama.

The lesson here is that it forces us audience members to really think about our views and what we think we know. A bit of this same thing was recently seen in “Long Shot,” where Seth Rogen’s über-zealous liberal journalist reacts in disgust to the revelation that his African-American best friend (O’Shea Jackson Jr.) is a card-carrying G.O.P. member. Then Rogen’s character freaks out further when he finds out his friend is also a fan of G.O.D. The argument goes something like this:

Jackson’s character: What did you think this cross was for that I’ve been wearing around my neck since the seventh grade?
Rogen’s character: I thought that was just part of your, you know, culture.
Jackson: You’re a racist!
Rogen: Oh, my God! … I am.

I spent most of “Luce” on edge and wanting to slap the lead character into the middle of next week for all his dodging, side-stepping, and passive-aggressive jabbing. That, and his brilliantly executed emotional equivalent of the basketball “flop” technique, where you dramatically sprawl on the court to get the ref’s attention, after your opponent just lightly brushed you, to pin a fake foul on him.

However, due to Harrison’s amazingly nuanced performance, I ended up with my own head feeling slapped into the middle of next week instead, and feeling I needed a second viewing to examine all my emotional knee-jerk reactions. That’s always the objective of good theater, and this movie version has that effect: Just what is it that I think I know, and why do I think it in the first place?

And so, regarding America’s problems of racism, sexism, LGBTQ issues, immigration and border wall issues, and so on, and my previous outlooks on all the issues—I’ve inadvertently done some of this self-reflection. I’ve been narrating an audiobook called “How the Specter of Communism Is Ruling Our World.” You can find it on iTunes.  It’ll stand everything you thought you knew about America and politics on its head.

A viewing of “Luce” will do the same thing. If you’re up for challenging yourself and letting go of your comfortable notions, that is.