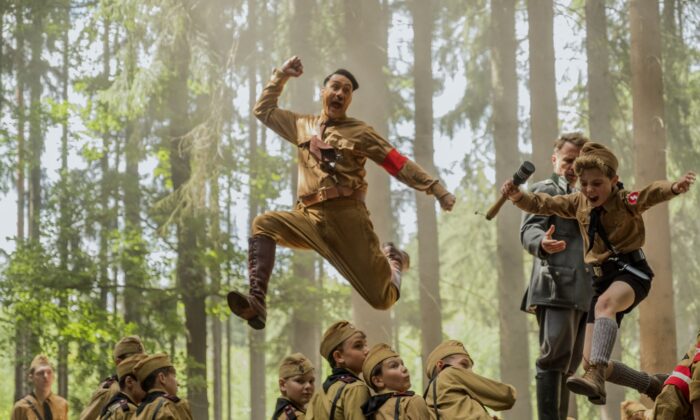 A satirical send-up of societal ultra-conformism
By Ian Kane

The trailer for Taika Waititi’s new satirical war dramedy, “JoJo Rabbit,” is gasp-inducing. It features Hitler Youth, knee socks and all, practicing Nazi salutes, war games, ambush techniques, and other martial maneuvers. It also shows a bedraggled Jewish girl secreted in someone’s attic. All this accompanied by cheery songs such as “I’m a Believer” by The Monkees—only in German.

Normally, “holocaust” and “comedy” don’t go together. There are a few exceptions: Roberto Benigni pulled this combination off with success in the excellent tear-jerker “Life Is Beautiful,” and filmmaker Ferne Pearlstein explored this unlikely coupling in her fascinating documentary “The Last Laugh.”

However, keeping in mind that Waititi wrote and directed the film (based on a novel written by Christine Leunens), I figured that it had more than a fighting chance. After all, he directed one of the more hilarious comedies of the last decade, 2014’s “What We Do in the Shadows,” which was a horror mockumentary about four vampires sharing a flat together.

A Young Soul at the Crossroads

The titular young protagonist of the film is Jojo (newcomer Roman Griffin Davis), a 10-year-old boy who is enrolled in the Hitler Youth program. At first glance, Jojo is quite enthusiastic (almost overly so) about serving his country and carrying out whatever dastardly deeds the Nazis have planned for him. So committed to the ideals of their regime is Jojo that he has fabricated Adolf Hitler (Taika Waititi himself) as his imaginary personal sidekick and confidant.

The youth camp Jojo is assigned to is presided over by Captain Klenzendorf (Sam Rockwell), an iron-fisted soldier whose stringent policies root out any weak links. Jojo soon discovers that he isn’t up to the training’s standards and suffers an almost fatal accident that sends him to the hospital. There, he has a talk with his mother (Scarlett Johansson), who encourages him to spend more time at home instead of engaging in the camp’s martial training regimens.

Back at home, Jojo soon discovers something else: Elsa (Thomasin McKenzie, “The King,” “Leave No Trace”), a teenage Jewish refugee whom his mother has stealthily secreted in the house. Elsa’s bargaining chip with Jojo is that if he alerts the authorities to her presence, not only will she perish, but his family will as well.

Her ploy works, and in between the usual talks with ol’ Adolf, Jojo begins to spend more and more time with Elsa. Over the course of his visits with her, Jojo sees her as less of a threat and more as the gracious and good-natured though utterly frightened person she is. And his preconceived notions of Jews, in general, begin to erode.

Once Jojo comes to peace with the idea of sharing his family’s home with Elsa, and as Germany begins to lose its ground against the Allies, the film takes on a more serious, dramatic tone. The film’s comedic moments are mostly replaced by grittier, thought-provoking scenes, as Waititi reminds moviegoers about the high cost of mindless bigotry and having blind faith in the wrong ideals.

The film’s casting is superb, with the standouts being the two younger actors. Davis is excellent as the young Jojo, who convincingly portrays a child’s shift from becoming a potential mass murderer to blossoming into one who questions the “Bizarro World” status quo, along with its fake news.

Likewise, McKenzie lends some emotional depth along with a gentle, yet sly, comedic touch to the proceedings. Despite the extreme adversity that her character has endured, she still offers up a relatively cheerful disposition. She even has the wherewithal to systematically dismantle the racial prejudices that Jojo was taught.

Not surprisingly in this sort of over-the-top satire, all of the Nazi characters are over-exaggerated cardboard cutouts. From being totally convinced that all of the fake news being fed to them is indeed real, to trying to outdo one another in their Nazi salutes, there are some clever modern-day parallels that deserve more than passing guffaws. After all, we live in an age when unquestioning ultra-conformists devour Big Media drivel as sacrosanct insights.

“Jojo Rabbit” is a superb film. Waititi skillfully weaves a tale of how easy it is for certain forces to beguile certain folks into joining their conformist hate groups. Remember, the ones usually babbling about things such as “hate speech” and casually labeling others as “racists” are usually projecting themselves onto others.