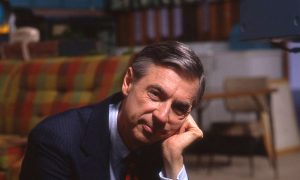 Film Review: ‘Honeyland’: An Eco-Doc Disguised as a Portrait of a Macedonian Beekeeper

The opening drone-shot of “Honeyland” is of an old woman walking in a remote wilderness hinterland. As she walks, a huge jackrabbit is startled and bounds away.

It looks a lot like Mexico, but it’s actually Macedonia. The woman, Hatidze Muratova, climbs a long, stony ridge. At the highest outcropping, she rolls away a large but thin stone flake, behind which hang perfect, golden honeycombs.

The fuzzy, buzzing manufacturers of the world’s golden sweetness are currently threatened. If they die—we all die. We hear that so often lately. And while most of us don’t know the science behind it, one assumes that where there’s smoke, there’s fire.

“Honeyland”—while appearing on the surface to be about traditional beekeeping, bee balance, and the avoidance of bee endangerment—is really a subtle eco-documentary.

Bee-whispering is a more apt description of what Hatidze does. She’s sort of an ancient, magical bee-nun, with her perennial headscarf, living in the Macedonian outback in a wee stone hut.

There’s more than a passing resemblance between Hatidze and the Wicked Witch of the West, only Hatidze’s not mean or green, and her long nose is not the result of Wickedness but rather the occupational hazard of what’s clearly been a lifetime of “rhino-apitoxia.” That’s my made-up pseudoscientific word for getting bee-stung on the nose a lot.

Hatidze is also a sweetheart: as kind, selfless, and giving as the day is long. As mentioned, she cares for bees, but she also cares for her wizened, little, bedridden, partially blind mom, Nazife.

The two of them are reminiscent of Dr. Seuss’s “The 500 Hats of Bartholomew Cubbins,” where the king calls upon his wise man, Nadd. Nadd is ancient and wizened. But Nadd’s wisdom is not sufficient to satisfy the king. Whereupon the king summons Nadd’s dad. Nadd’s dad is seriously ancient and wizened. Hatidze and Nazife are Macedonian female versions of Nadd and Nad’s dad: They are both simultaneously piteous, noble, wise, and quite comical. Actually, there was also Nadd’s dad’s dad. (He was the wisest.) Too bad Nazife’s mom wasn’t still alive. But I digress.

Nazife, who lies eternally in a bundle of blankets upon a bed, notes that she’s become a burden to her daughter, since, while she really should die and do Hatidze a big favor, she’s just not feeling it. If this were a fairy tale, these two would be referred to as ancient hags, and so it’s even more sad and hilarious when Hatidze, feeling depressed about her future, wonders what will become of her when Nazife dies and leaves her all alone.

Hatidze: What will happen to me? What am I supposed to do when you’re dead and gone?
(Long pause)
Nazife: Get married … ?

There Goes the Neighborhood

After establishing Hatidze’s story and showcasing her antediluvian methodology of beekeeping, with its natural stone and tree hives, its use of a puffing mini bellows filled with goat dung powder (to subdue swarming bee aggression), and her mesmerizing chanting of rhythmic, folksy bee-cantations, where you can literally feel the hypnotic power with which it commands bees—along come the Sams.

The Sams are a nomadic family. They move in with their seven children and slightly despotic (and hugely inept) patriarch, hauling with them a one-family trailer park and many cows. And when he finds out what Hatidze does for a living, Mr. Hussein Sam starts thinking that maybe he’ll also affiliate himself with some of the apparent apiary abundance.

At first, Hatidze welcomes the company, playing with the younger children, who are, for the most part, fairly latchkey given their dad’s level of disorganization.

Hatidze is happy to teach Hussein about beekeeping, repeating over and over again that one must take only half of each hive’s honey and leave the other half for the bees.

There’s a scene of him and his supervisor (basically his honey-pimp) chain-sawing apart one of Hatidze’s meticulously tended-to hives, which is housed in a dead tree bridging a small creek. They greedily munch on the pilfered honeycomb like it’s watermelon, and steal all of it.

Ultimately, Hussein’s all about getting while the getting’s good, and sure enough, his bee swarms get too close to hers (swarms are territorial) and end up killing hers.

Which is heartbreaking. Because Hatidze needed every last drop of her hard-cultivated honey to take to the annual marketplace, to peddle her wares, and maybe have a little money left over to splurge on some chestnut brown hair dye, in order to feel a bit pretty. Not to mention caring for Nazife.

Life on earth is about honoring the laws of harmony that lead to well-being, abundance, and flow. The recent farming documentary “The Biggest Little Farm” proved this in spades.

But “Honeyland” is not a fictional story about a good woman and an evil man; Hussein Sam’s a desperate man—nine mouths to feed is a massive weight of responsibility. His family needs all the money that his Johnny-come-lately attempt to sell honey can bring him, and they needed it yesterday.

And while “Honeyland” is not an in-your-face, “Fracking-is-horrible!” type of eco-doc, it carries the same message. Yes, absolutely, drilling and pumping deadly chemicals hundreds of feet down into shale and ruining the groundwater will sure enough unbalance the environment.

But in this case, all you need to do is get greedy, let your bees get too close to someone else’s bees, cause bee genocide, and we know what happens when all the bees die.

It could also be argued, in favor of balance, that if you live in the remote outback, maybe you should think twice about the wisdom of trying to raise seven kids.

The directors of ‘Honeyland,” Ljubomir Stefanov and Tamara Kotevska, were commissioned by The Nature Conservation Project (NCP) to create an environmental video in Macedonia.

Stefanov went to research the region and found out that there were some old, traditional wild beekeepers still there. They shot over 400 hours of footage, over the course of three years, with the dramaturgy always clear from the start: They wanted to tell a story about about ecological peril, via this particular wild beekeeper.

Then when the Sam family showed up, it became more about the conflict between them and Hatidze, and how that affects the balance of the land—and the directors had their ready-made, serendipitous nemesis.