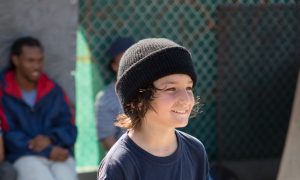 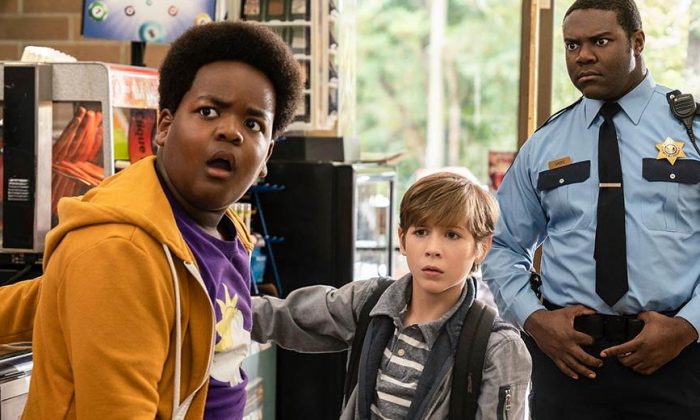 You know, I love movies about kids. My favorite is 1986’s classic “Stand by Me;” about four boys who go on a hike to bear witness to the body of a dead classmate, killed by a train, that the cops haven’t found yet. It’s a powerful rite of passage; they become aware of the fleetingness of mortality.

So I was looking forward to “Good Boys,” about three 11-year-olds who call themselves “The Beanbag Boys.” (They sit around in beanbag chairs playing cards and video games a lot.)

They also like to curse. Or rather, the writers (Lee Eisenberg, Gene Stupnitsky), director (Gene Stupnitsky), and producer (Seth Rogen) of “Good Boys” revel in having these little boys curse more than any other movie you’ve ever seen: It’s all children spewing non-stop F-bombs.

Normally, I’m a huge fan of (producer) Seth Rogen. But in the pre-trailer to this movie, where Rogen, talking to the young cast members, curses up a storm and then suggests there should be no R-rating on “Good  Boys,” because these self-same stars of the show would then, technically, not be allowed to see their own movie, at this point, I started getting a bad taste in my mouth.

So, are we now, soon, going to start doing away with ratings altogether? And all-out trashing the sacrosanct innocence of youth for cheap laughs? Are you a parent trying to raise your kids right? One look at this movie will undo all your years of hard work. Sheesh.

But if You’re Going Regardless …

The cool boys are in the Scooter Squad. When the Beanbag Boys go up against the Scooter Squad in a beer-swigging competition (the record is three swigs), Thor (who likes being in the glee and drama clubs) can’t handle his beer, and the Scooter-leader starts calling him “Sippy Cup.” Which makes Thor quit all his fun stuff in shame.

Meanwhile, Lucas, the chubby black Beanbag Boy, finds out his parents are divorcing. And then Max gets invited to a spin-the-bottle party by the school’s pint-sized king of cool, Soren (Izaac Wang).

Now the pressure is on, because Max’s main crush, Brixlee (Millie Davis), is going to be there. Problem is, Lucas has no experience whatsoever with the type of cootie-infested kissing that will probably happen there.

The Beanbag Boys manage to get Max’s dad’s drone taken hostage by two teen girls (Molly Gordon, Midori Francis). You see, the boys were trying to drone-film them in order to capture instructional kissing footage of them messing around with their boyfriends.

The boys try to negotiate to get the drone back (it’s dad’s work-drone; it’s serious business!), but end up with a blackmail-standoff, because they take one of the girl’s purses hostage to get even, which contains a child-proof bottle of party drugs.

Guess what? This is the film’s main conflict. And much, much mileage is gotten out of little boys not being able to open the child-proof bottle containing drugs.

Will the boys manage to navigate their way to the local mall (much like “Harold and Kumar go to White Castle”) and buy a new drone before dad (Will Forte) gets home? Will Max figure out the dreaded French kiss?

In addition to the non-stop 11-year-old F-bombs, you’ve got little white and Asian kids talking like gang members on a drive-by shooting, (“Yo dawg!”). The fact that it’s bluster, and they don’t generally know what they’re talking about is more sad than hysterical. Not weepy sad, more, “*sigh* What’s the world coming to?” sad.

And you don’t even want to know what the boys find in Max’s parent’s bedroom.

The other thing is, the gang-like posturing and endless swearing are now what pass in America for the traditional boyhood-to-manhood rite of passage. Because that’s no longer mainstream knowledge. It’s not understood that these kids can’t just leapfrog over that, and obtain manhood, merely by lowering their morals, cursing up a storm, and acting tough. Becoming men was meant to elevate moral standards, not lower them.

Everything in the Universe Is Currently Backward and Upside Down

“If you don’t initiate the boys, they will burn down the village to feel the heat” is an African proverb that sums up the lack of a real, tried-and-true, traditional rite of passage that’s missing from modern society. It’s lack is what’s exacerbating and fueling the popular term “toxic masculinity.” What it means for boys to learn to be truly tough is ridiculed.

In fact, the movie has the ever so politically-correct “Bully Squad” that Lucas becomes a part of; a little group of yellow-vested students who accompany bullied children into school.  This only exacerbates the shame of the weaker students, magnifying the bulls-eye on their backs, and leaving the bullies licking their chops for encounters when the Bully Squad is not present. That’s not doing boyhood any favors either, in the long run.

There’s a completely backward societal movement happening where American boys are being marginalized; where mothers are actually resenting their sons when they see signs of testosterone. Let’s outlaw testosterone, shall we?

America seems to be headed toward some kind of fantasy of a Yin- rather-than Yin-Yang-based, homogenized planet; maybe there will be some kind of estrogen-vaccination that boys will be required to have in schools, because their God-given testosterone makes them too inconveniently conflict-y.

That won’t make them “Good Boys,” or even better boys. They’ll be bad boys, because they won’t be boys at all. Is that we want? A world of only girls? Are we going to tamper with genetics, try to fool Mother Nature, exterminate bullies, and stamp out boys?

Why don’t we try resurrecting the tried-and-true tribal and societal traditions, which have gone missing—the ones that previously provided the answers for the problems that today has everybody scratching their heads?