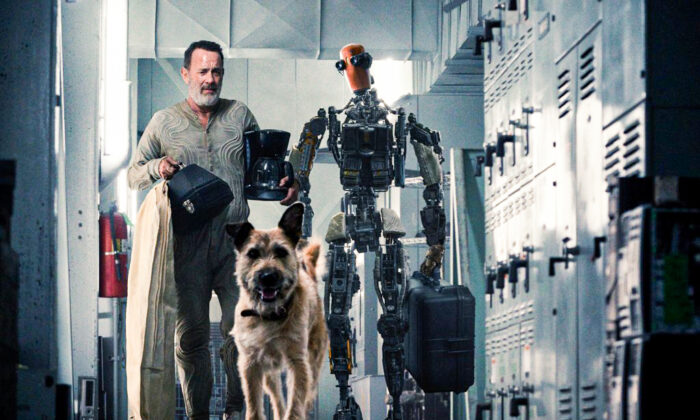 Only the second feature from veteran TV director Miguel Sapochnik (“House,” “Game of Thrones”), “Finch” comes with a complicated back story. Initially titled “BIOS,” the spec (unsolicited) screenplay was penned by first-time writers Craig Luck and Ivor Powell. After a bidding war, it was bought by Steven Spielberg’s Amblin Entertainment and was going to be distributed by Universal. That was in 2017.

Before production even began in New Mexico in 2019, the opening date of Oct. 2, 2020 was set and then COVID-19 hit. The release date was changed three times before the film was eventually acquired by Apple TV+ in May of this year and, with 11 more producers brought on board, was retitled “Finch.”

Beginning in St. Louis in the near future and in the wake of an unspecified, global apocalypse, “Finch” starts with great promise. In a manner akin to “Moon,” “The Martian,” “A Quiet Place,” and “Arctic,” the practically dialogue-free, yet highly-informative opening act delivers volumes of information.

Finch Weinberg (Tom Hanks) is living in the bowels of the headquarters of a tech company where he worked as inventor, or perhaps an engineer. It’s never made clear nor does it matter. Finch is sharp guy with lots of free time (10 years so far) to work on getting out, hitting the road, and connecting with his father in San Francisco—a man he’s never met.

It’s All for the Dog

A couple times a week, Finch ventures out to forage for food and other staples with his dog Goodyear and a robot he calls Dewey. A mini-shopping cart, Dewey can follow basic commands and can see, yet can’t speak, but more importantly, has gained the trust of Goodyear.

These day trips, while sometimes fruitful, are quite dangerous. Despite Finch’s wearing of a self-cooling, head-to-toe radioactive-protective suit, the temperature in the shade is 140 degrees and exposure to sunlight for even a few seconds will cause severe burns. Why Finch doesn’t make these trips at night with more moderate temperatures makes lots of sense when explained later in the story.

Through further superb non-verbal communication from the filmmakers, its clear Finch is quite ill and—in tandem with an unforeseen weather event— knows he’ll have to depart sooner than planned. This means he won’t be able to put the finishing touches on another, more advanced robot whose sole mission will be to look after Goodyear when Finch cannot. This main plot bears more than a passing resemblance to that in “Terminator 2: Judgment Day.”

Just why Finch is so concerned with Goodyear’s future is explained in the movie’s sole second act flashback scene, a passage that even those without pets will appreciate. It goes far in explaining why Finch created another, more advanced robot.

A Machine Presented as Quasi-Human

As the story progresses, “Finch” morphs into a road flick. The robot—which chooses the name “Jeff” (voiced in a motion-capture performance by Caleb Landry Jones)—slowly starts taking on human traits, including joy, sadness, empathy, physical humor, and self-preservation. This brings the machine closer to Goodyear—which is Finch’s objective and it works within the construct of the film’s narrative. It also raises several moral and ethical filmmaking issues.

Although the proliferation of Artificial Intelligence (A.I.) characters in movies has been more pronounced (and romanced) over the last half century (particularly the last decade), that’s certainly not where it started. As far back as 1927 with “Metropolis,” in 1951 with “The Day the Earth Stood Still,” and in 1956 with “Forbidden Planet,” human-influenced A.I. beings have been go-to tools for sci-fi productions.

While in some instances, they’re borderline cute (virtually every “Star Wars” and “Star Trek” installment, “Short Circuit,” “The Hitchhiker’s Guide to the Galaxy,” “WALL-E,” “A.I.”), or written as suspicious sex symbols (“Blade Runner,” “Ex-Machina,” “Tron: Legacy”), the lion’s share of the remaining portrayals have been (appropriately) positioned as villains.

It is worth clarifying; characters in “2001: A Space Odyssey,” “Moon,” and “S1m0ne” were disembodied computer programs, not physical A.I. robots.

The situation with the Jeff character here is not entirely unique (the title character in the animated “The Iron Giant” shares many similarities) but nonetheless walks a thin line.

Are Dogs Wiser Than Humans?

Although the robot is following its directives to the letter, it takes nearly the entire movie for Goodyear to warm up to Jeff (maybe dogs know something we don’t?). While the far more rudimentary Dewey was able to bond with Goodyear without displaying any human traits (including voice) whatsoever, in Jeff’s defense, Dewey had more time to accomplish this bonding and the latter has no ability whatsoever to protect Goodyear.

In trying to protect his pet, does Finch overstep his bounds? He has talents as a creator but not the Creator. It’s a dangerous slope when humans design and manufacture A.I. entities, which filmmakers would like for us to refer to with human pronouns (he, him, she, her, and so on) rather than what “they” are—machines.

In “Cast Away,” Hanks’s Chuck Noland develops an inter-“personal” relationship with a volleyball, which he (not so ingenuously) addresses as Wilson. This is done by a man attempting to stave off insanity and boredom while coping with being stranded for years on an island. Noland never expects a response from Wilson; and there’s the rub.

In the grand scheme of things, Wilson is just a different version of Jeff. Granted, Jeff has a wider range of talents and can emote, but neither of them is human. As much as people, through the power of moving images,  might like us to, this is a fact we can never accept or overlook.