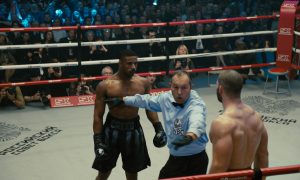 My first job out of college was as a counselor in a group home for “emotionally disturbed” teens. Not sure of the politically correct term now, but basically kids from broken homes.

Actually, the kids were popular in school: good-looking mean girls and bullies who terrorized teachers, and terrorized the counselors the minute we picked them up in the group-home van that they would rather die than get caught being seen in. Police were at the group home regularly; one counselor rolled all the way down the hill from the home into the street, with one kid, fighting off a knife attack.

Anyway, I’m not here to talk about angry, depressed teens but about World Wrestling Entertainment (WWE)—professional wrestling. We had one kid, Patrick, who came from a mountain-people family. When we picked him up the first time, one of his nine big brothers was throwing an ax into a tree from 20 paces, in the front yard. Straight out of Southern Appalachia, except in Sloatsburg, New York.

Huge wrestling fans, Patrick’s kin. I made the mistake one day of saying, “You know that’s all fake, right?” Oh my goodness—the invective shower. It went on for days. I had violated Patrick’s religious belief system. He was only 13, but his brothers ranged up into their mid-30s, and they were all true believers in the WWE.

And so this particular experience afforded me a deep insight into American culture: A giant portion of the American population—and, indeed, the rest of the world—believes professional wrestling is very real indeed.

And I used to have no respect for it, but I’ve learned over the years that while a large portion of professional wrestling is showbiz, and (as here described by former superstar, pro-wrestler Dwayne “The Rock” Johnson) “soap opera in spandex,” it is, nonetheless, incredibly dangerous.

It calls for a high degree of skill-in-mayhem and a particular high-octane, head-banging personality with a wild streak bordering on insanity. The stunts: jumping off 30-foot cages and landing on chairs and destroying them (and possibly your rotator cuff) and such.

The Stage Is Now Set

“Wrestling With My Family” is the true tale (based on a 2012 documentary) of a British family of head-bangers, for whom wrestling is the family business, and how their little girl has a wrestler’s Hero’s Journey: She goes to America, meets “The Rock.” There, she gets to ply her trade on a world-class stage, and in doing so (per the vocabulary of the Hero’s Journey), brings gold back to the village compound, by beating star AJ Lee and winning the Divas Championship belt.

Nick Frost plays Ricky Knight, the portly Mohawk-and-biker-tattooed patriarch of a wrestle-manic  family in Norwich, England. If Ricky wasn’t managing a wrestling family, he’d be robbing banks. Much like the brawler-type Navy SEAL, (according to SEAL Rorke Denver) who needs war-fighting in his life to avoid ending up in the slammer, Ricky needs wrestling to focus his talents.

In a particularly funny scene, Ricky conducts an interview and negotiates a contract: Is the wrestler applying for the job willing to take a garbage-can lid to the face? Good! Duly noted. Will he take a bowling ball to his, er, nether region? (All of these “wrestling moves” are applied to the interviewee during the interview.) Long pause … weak nod of acquiescence. “Excellent! We’ll let you know.” Son Zak later demonstrates being body-slammed onto a thumbtack-strewn mat. That’s actually a thing.

Ricky lives for wrestling, and so does his wife Julia (Lena Headey), son Zak (Jack Lowden), and daughter Saraya (Florence Pugh). They promote wrestling, wrestle themselves, and Zak runs a gym that provides an outlet for the local goth-clad, death-metal-loving kids in the neighborhood who need an outlet for their prodigious energy. Ricky’s second son is in the slammer.

Zak and Saraya made WWE Championship belts out of cardboard when they were little, and eventually they go try out for a shot at the big time. Talent scout and WWE coach Hutch (Vince Vaughn) picks Saraya to relocate to Florida and join his WWE-pipeline training camp.

I’d advise not going into this movie thinking that it’s just a comedy. It’s a real-life story, and when Zak, who wanted the WWE-in-the-sky dream more than his sister, doesn’t get to go, his devastation is very real, not to mention his jealousy.

Saraya picks the stage name Paige, and while she grew up with wrestling and considers herself the real deal, she’s not prepared for the ultraserious American approach to any venue connected to a world-class platform. Wrestling boot camp is brutal, and her pudgy self is competing with fitness models, model-models, and cheerleaders who, while ditzy in appearance, are anything but when it comes to competing.

Meanwhile Zak’s status as an also-ran dropkicks him straight into deep depression, and he and his girlfriend are pregnant. Luckily, Zak’s got a Hero’s Journey character arc of his own: “Those can’t do—teach.” And while that’s an oft-maligned phrase and not glam, it’s just as necessary.

Vince Vaughn plays his stock-in-trade, funnily acerbic cynic, but underneath, informing his character’s hard-bittenness, is a compassion born of having walked the talk, and lost.

Dwayne Johnson has never been better, giving, maybe for the first time, a real sense of who he is. As they say in most art forms—write, act, etc., what you know. The Rock knows WWE wrestling.

Patrick at the group home didn’t know wrestling, but that was 36 years ago. I wonder how well America knows wrestling now, especially now that the WWE has to compete with MMA and the UFC (mixed martial arts and the Ultimate Fighting Championship)? It’s alive and well and there’s room for everybody, because America still loves itself some soap opera in spandex. And because, as this movie aptly demonstrates—professional wrestling is a way of life.