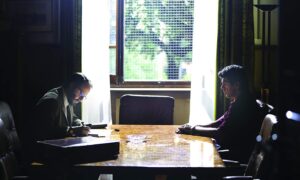 Film Review: ‘The Traitor’: The Man Who Took Down the Sicilian Mafia
0

Mark Twain once wrote: “Truth is stranger than fiction.” This saying is often proved by films based on actual events and is no more evident than in director Andrew Heckler’s drama “Burden.” The film received attention at 2018’s Sundance Film Festival, but it took two years to bring it to movie theaters. Luckily, the filmmaker’s perseverance paid off. It would have been a real shame for this beautifully crafted film to miss the exposure it deserves.

The titular character, the aptly named Mike Burden (Garrett Hedlund, “Troy,” “Friday Night Lights”), is a hard case, but he wasn’t always that way. When a young orphan, Mike fell in with the Ku Klux Klan (KKK) in order to have some semblance of a family. The film opens up in the year 1996 when Mike, as an adult, is the repo man in a small South Carolina town. The job’s an ages-old tinderbox as far as race relations go.

The local KKK chapter’s leader, Tom Griffin (played by Tom Wilkinson), has infiltrated the town so completely that he’s managed to turn a dilapidated movie theater into the Redneck Shop and KKK Museum full of racist memorabilia. Since Griffin holds such sway in town, the local authorities do nothing about the opening.

But that doesn’t mean everyone will let things be. Reverend Kennedy (Forest Whitaker) begins a peaceful protest of the opening, along with members of his congregation. Lines are drawn in the sand—love and understanding versus hatred and bigotry.

Just when things might get ugly, Mike visits Judy (Andrea Riseborough) to repossess a piece of her property and, meeting her, begins to have second thoughts about his role as a Klansman. Along with Mike’s longtime high school buddy, Clarence Brooks (Usher Raymond), Judy eventually manages to convince Mike to leave the racist organization and live a more positive life. When the KKK discovers Mike’s plan to leave, they set a plan in motion to get revenge on him.

Mike and Judy find an unlikely ally in their quest for a new life in the almost-impossibly righteous Reverend Kennedy, whom, in an ironic twist, Mike was originally scheduled to assassinate. The good reverend is so forgiving that he opens his home for Mike and Judy to hide out in.

Needless to say, Reverend Kennedy’s wife Janice (Crystal Fox), son Kelvin (Dexter Darden), and members of his congregation are all suspicious of the reverend’s new house guests. All of these elements set up a tension that carries the film through most of its one-hour-and-fifty-seven-minute runtime.

The film’s excellent cinematography (Jeremy Rouse) along with both a snappy script (Heckler also wrote the screenplay) and some natural performances by the excellent cast combine beautifully. Hedlund plays the part of a conflicted man, caught between two worlds, with phenomenal acumen and gusto. Riseborough is equally convincing as a small-town single mom who wants the best for the man she’s fallen in love with.

“Burden” manages many tension-filled scenes that never feel overwrought or artificially manufactured. The adeptness of its outstanding cast and crew keep it from ever treading into predictable waters, and so the good-hearted “Burden” is a solid film telling a hopeful tale about eventual redemption.