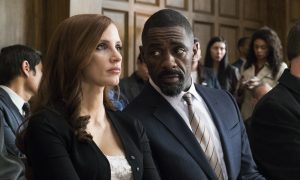 Movie Review: ‘Molly’s Game’: A True Tale of Hollywood, Card Sharks, and Getting Out Alive
0 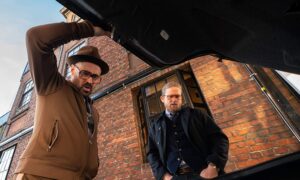 Here’s a hilarious little movie starring Zoey Deutch that makes itself quite useful as a whistleblower on the state of America’s debt-collecting infestation. Why would that topic be funny? Remember “Back to the Future’s” Marty McFly, played by Michael J. Fox? Remember his mom, Lorraine, played by Lea Thompson, and how funny she was?

Well, it was only a matter of time before Lea Thompson’s actual kid, Zoey Deutch, broke away from the young Hollywood ingénue pack, and though she’s got model looks—guess what her acting power alley is? That’s right—she’s a comedienne par excellence, just like mom.

Hollywood hadn’t really figured out what to do with Deutch up until her last movie, “Zombieland: Double Tap,” where she played a pink-clad ditz, running around slightly unhinged, looking way too stupid to survive a zombie onslaught—and yet survive she did. And how.

And so it would appear that Zoey Deutch’s archetype (and the showbiz product she sells best), for which she will most likely henceforth be known, is as an annoying, squeaky-voiced, hyper-ambitious, scrappy, eternally optimistic and enthusiastic, cutthroat survivor, who somehow manages on top of all that to be extremely charming and watchable. That’s some serious charisma.

She’s Got a Plan

Zoey Deutch stars as Peg Dahl, a girl growing up poor in South Buffalo, New York, who’s feeling the classic, small-town claustrophobia of the mega-talented, weary of wearing her brother’s hand-me-downs, and who’s got enough ambition and entrepreneurial talent to eventually watch the city of Buffalo dwindle in her rearview mirror.

The only problem is that her super-shrewd head for business is connected to a heart sorely lacking a sense of right and wrong. Her mother (Judy Greer) later laments that she did the best job she could to raise her daughter with a sense of morality.

Anyway, from a young age, Peg is determined to study business at an Ivy League institution of higher learning, and then take on Wall Street and be the next Warren Buffett.

When that fateful day arrives that she’s accepted to her school of choice and realizes she can’t pay for it, she starts up a flurry of hustling: selling cigarettes in school, and buffalo wings and counterfeit tickets at Buffalo Bills games, out on the sidewalk.

Then one day she gets a phone call from a debt collector. He’s not too good at his job, and with her business sense being like a Spidey sense, or X-ray vision, she realizes that she could do this guy’s job much better than he can.

And similar to real-life wannabe lawyer Molly Bloom discovering her own blistering talent for running illegal poker games, Peg swan dives into one of America’s biggest, unregulated, con games—debt collection. Also like Bloom, Peg eventually goes to jail, but does she grow a conscience in the slammer? Nooo. She gets shrewder.

One of the reasons the movie is set in Buffalo is because that particular seedy city happens to be a sort of ground zero for the debt-collecting industry.

Peg learns the ropes of the collecting game from her new boss, a small-time debt-collecting overlord named Wizz (Jai Courtney). In the tradition of 1992’s “Glengarry Glen Ross,” 1995’s “Casino,” 2015’s “The Big Short,” and 2019’s “The Laundromat,” Peg takes us on an educational journey of how the money flows throughout the various con games and scams. In this particular case, it’s the cons specific to the debt-collecting world, and, as ever, your jaw will drop at what the con-men vermin in our fine nation get up to in the absence of government oversight. When the cat’s away…

Also like Molly Bloom, Peg eventually strikes out on her own, putting together her own talented crew of marginal types who share a pronounced talent for selling: namely, a Jehovah’s Witnesses-type proselytizer, a phone-sex worker of a certain age, and an Indian-American utilizing a florid, Abu-from-the-“Simpsons” Indian accent to promote the restaurant he works for. That is, until she recognizes him as having attended her high school, and he’s all of a sudden, like, “Oh, snap, you’re what’s-his-name’s older sister…”

This naturally all leads to a showdown with former boss Wizz, and of course, we want to see her stick it to him. The problem is, we root for her because while she’s bad—he’s worse.

Allow me a quick tangent: We’re getting a fair amount of this lately. Harley Quinn, for example, is a bad girl, but her adversary is so much worse that we want her to succeed in beating him to death with a baseball bat. This has got to be doing something bad to us, down there, in our collective subconsciousness. Also, like Harley Quinn, Peg is so cute and pretty and peppy and energetic, we allow ourselves to get charmed to death. Like, to the death (or maybe more like the major illness) of our souls. Sigh.

The cast all seem to have nailed the Buffalo accent, and it’s likely that the good people of Buffalo will enjoy all the local references; one can assume the research was thorough.

A running gag is the local pride regarding that particular chicken dish for which Buffalo is known for the length and breadth of our great nation, and there are two main competing establishments that apparently divide Buffalo-ans in terms of their wings proclivities. Hilariously, the presiding judge at Peg’s hearing bequeaths unto her the ultimate Buffalo insider tip: He gets his wings from the one place but his blue cheese dip from the other place.

Because it’s essentially a wee gangster tale, it’s got some little gangster instances, like our Peg flying into a rage, running across town after Wizz, brandishing a gold-plated .44 magnum,

but generally speaking, this is an extremely satisfying American comedy. The interactions between Deutch, Judy Greer, and Jermaine Fowler are particularly enjoyable. Fowler plays a prosecutor who really should be looking to arrest Peg, but he can’t help becoming twitterpated due to her spunky cuteness.

As mentioned, Deutch is a comedic talent to reckon with; she fires on all comedy cylinders, shifting gears and tactics like a Formula One driver. She’s the driving force here, to continue the metaphor. The movie itself is well-conceived, fun, funny, and very informative, regarding the shadowy world of debt collecting.

“Buffaloed,” the title, describes two things: 1) the story’s setting, and 2) bullying. Debt collectors buffalo Americans not just in Buffalo, but as we all well know, from coast to coast.

When I’ve heard about various and sundry friends’ debt loads, and imagine those albatross-like, bullying phone calls from debt collectors—I’ve found myself feeling fear and shame. Not anymore. Those self-righteous-sounding debt-collecting jackals would sell their own children. Much of what’s depicted in this movie is, or should be, illegal. “Buffaloed” does a fine public service of shining a spotlight on this particular American human-roach infestation. Go and laugh and be simultaneously informed about what the real deal is with the state of your student loan.