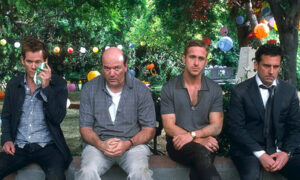 I recently ranted about the ridiculous amounts of CGI used in “F9: The Fast Saga,” which has basically ruined the classic summer blockbuster and is turning American audiences’ minds into mush. “Black Widow,” however, is a much better movie; it can be considered a real summer blockbuster.

Ironically, it’s conceivably got more CGI. The difference being that this is pure fantasy, whereas the fast-car movies are supposed to be grounded in reality. So if all the characters in “Black Widow” have supernormal abilities that we choose to suspend our disbelief about, like, if they can fall a mile out of the sky, crater in the desert like Wile E. Coyote, and get up and shake it off, then the rest of the CGI foolishness is automatically drawn into the same category of disbelief suspension and therefore “makes sense.” Make sense?

Here’s the deal: I’d put “Black Widow” up there in the top three most entertaining films of the MCU (Marvel Comics Universe). Why? Because it’s funny, and it’s got actual acting happening. And because the blistering fights ironically—due to the fact that Black Widow (Scarlett Johansson) is a martial artist—lean more into the neighborhood of “Jason Bourne,” rather than Hulk-smashing, Ironman palm-zapping, and Spidey web-slinging. Which feels more real. And real, in the MCU, is a precious commodity. So basically you end up with a real-feeling fantasy flick instead of, as in the case of “F9,” a fake-feeling “real” flick, and that makes for a much more satisfying summer action movie.

As you may remember, Natasha joined forces with Nick Fury (Samuel L. Jackson) and S.H.I.E.L.D. and put her assassin skills to good use. She assisted in recruiting new Avengers and ultimately saved half the lives in the universe by sacrificing her own life in 2019’s “Avengers: Endgame.” So “Black Widow” is an origin story and sort of prequel, also a “how-she-fits-into-the-MCU” story.

When the Americans sniff them out, they escape back to Mother Russia, where they cease to be the “family” they never actually were. The girls enter the Red Room program (a secret KGB program that uses eugenics and forced sterilization), which is sort of like the Red Sparrow program, except that instead of becoming sex spies, they’re trained as Black Widow martial arts ninja-type spies. (This is the assassin program Natasha broke free from, to join the Avengers.)

Now we jump to the period between “Captain America: Civil War” and “Avengers: Infinity War.” The Avengers no longer exist. Natasha is a rogue agent on the run.

Dreykov (Ray Winstone, best known as a staple of Guy Ritchie’s British underworld thug movies) is a Russian kingpin who’s figured out a way to use mind control on the tens of thousand of Red Room spy-girls, worldwide, against their will. That’s not good. That’s power that can be abused. And lots of girls who can be abused. And since Natasha and sister Yelena are themselves Red Room-trained Black Widows—they need to save all their sisters.

The action in “Black Widow,” as mentioned, is more grounded in hand-to-hand combat, which, while also over-the-top, manages to rub off on all the rest of the mayhem and explosions and make them seem more real. For example, while Natasha has outrageous martial skills (not to mention the Wile E. Coyote cratering immunity), she occasionally runs into superior fighters, such as the metallic skull-masked “Taskmaster.” These are smoking-hot fights, but you can see Natasha using her mind to outwit her stronger opponent, and that also confers a level of reality.

What’s also riveting is the fact that among the four leads (the “family”), there are major family dysfunction issues of abandonment, treachery, and loneliness, the effects and residues of which are all acted out with outstanding commitment to realism. Surprisingly touching for a comic book movie. Very surprising.

There are also themes, naturally, about legions of women being preyed upon by a distillation of the Epstein-Weinstein-Cosby-Raniere ethos, but that’s not to say that “Black Widow” takes itself too seriously. Make no mistake—it’s a comic book movie. But a good one.

The cast is exceptional, and David Harbour is a revelation in comedic mode, but it’s Florence Pugh who scene-steals throughout and makes it look easy. And that’s no easy feat. Scarlett Johansson has been radiating charisma ever since, as an unknown, she completely stole 2001’s “Ghost World” right out from under star Thora Birch’s nose, but Pugh’s star is now on the rise. Pugh’s got a mesmerizing fire behind her green eyes and an animal-like magnetism that allows her to attract audience eyeballs like steel filings to a supermagnet.

The movie’s highlights feature Johansson and Pugh milking the big sister-little sister routine for gags; much of which involves Yelena taking potshots at Natasha’s Avenger status, calling her the least powerful Avenger, and razzing her superhero “landing pose.” She points out that whereas the male Avengers just do the standard, one-knee-one-arm touchdown, Natasha feels compelled to do an attention-grabbing, derrière-flaunting, dramatic lateral flourish. Pugh’s a scene-stealing Terminator, and she’ll be baaack.

So, to sum up—Natasha Romanoff aka Black Widow, the Avenger, died, and “Black Widow” is an origin story, prequel, and tribute. We get to see her story told in full and have clarified for us the character’s decision to die, so as to give her Avenger teammates—and humanity—a chance at defeating Thanos. “Black Widow” shows us that Natasha’s selflessness in making that kind of sacrifice is what sets her apart from the rest of the Avengers. “Black Widow” is an honor to her legacy and a final send-off.

One last observation: The “Black Widow” roundhouse kicks Russian communism and all of its obsessive compulsion to world-dominate, in the teeth, and that alone is worth the price of a movie ticket. You can watch it at home on Disney+ for $29.99. But since it’s no longer quarantine time, go see a summer blockbuster the old-fashioned way—in the theaters.