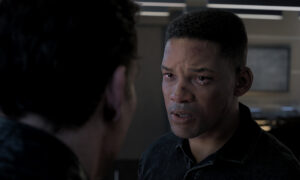 Film Review: 'Gemini Man': Is It a Recommendation for Cloned Super-Soldiers?
0 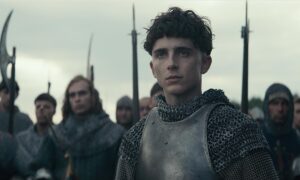 Alicia West (Harris) is a New Orleans rookie cop. She’s Black. She’s a cop—and that’s your movie title right there. Why’s that interesting? In America, being “biracial” in this particular sense will put you in a world of hurt when you have to police the neighborhoods you grew up in, being perceived as a traitor.

Young Alicia, at age 17, broke out of the New Orleans ghetto by signing up with Uncle Sam’s Army. Two tours in Afghanistan, she’s already a battle-hardened vet when she returns to join her hometown law enforcement team. Which means she can be bullied by veteran cops as a rookie only so far. She might not know the ropes just yet, but do not tread on her.

Alicia hits two birds with one stone: working out by jogging to her recently deceased mom’s grave and leaving fresh flowers. On the way home, in a well-to-do neighborhood, two white police officers roll up on her, slam her against an iron fence, and pat her down with undue hostility.

When they realize she’s blue too, they lamely explain the racial profiling and unnecessary force: She fit the description. A highly unapologetic apology is reluctantly offered.

She’s soon pulling a double shift with highly intimidating vet officer Deacon Brown (James Moses Black) as her shift squad-car partner. Brown spells out the racial rules of black and blue: You think you black? You think those your people? Well, they not. … You blue now.”

They cruise around a little bit, and then Brown pulls up at an abandoned factory. He tells her to stay put. You can see her wondering how it is that he gets to talk to her the way he does.

However, there’s an irresistible copper-colored Chevelle with white racing stripes sitting in front of the squad car, and when a random street guy starts trying to break into it in broad daylight, right in front of a squad car, no less, she’s bound and determined to do some police work. She runs the would-be perp off, but immediately hears gunfire coming from the factory.

Upon investigation, she witnesses a narcotics team, headed up by Terry Malone (Frank Grillo), owner of the Chevelle, blow away a black drug dealer. Her body-cam witnesses it too, recording everything, along with her getting fired upon herself by the narc boys, because they notice the body-cam.

Running From the Blue and the Black

Alicia is suddenly and desperately on the lam, but as bad as it gets, she deeply knows right from wrong and virtue from vice, and that body-cam—by golly—is going to get delivered to her police precinct, on her watch, or she’s going to die trying. It’s a fine display of courage and righteousness.

Alicia’s shot up; she needs to apply some Afghanistan-learned, improvised field dressing. In need of shelter and assistance, she hunts down an old acquaintance, Milo “Mouse” Jackson (Tyrese Gibson). He’s in I-don’t-want-any-trouble mode, but she eventually wins him over with her combination of vulnerability, truthfulness, and wanting to do the right thing.

The dirty narc boys want her six feet under as soon as possible. And when the local gang shot-caller Darius (Mike Colter) pulls up in a black suburban, wafting prodigious shaved-head menace, and finds out his nephew just got executed (and, as the narcs pin it on Alicia), he immediately wants her tremendously dead—yesterday. So now, she’s on the run from the blue cops and the black neighborhood.

Tyrese Gibson of “Fast & Furious” fame is normally an action guy, but here he puts on some weight as Milo and does a solid dramatic turn.

Oscar-nominated former Bond girl Naomie Harris nails her first leading role here, and herewith joins the rarefied crew (which includes Eamonn Walker and Idris Elba) of feted British black actors who can come over here and get so seamlessly African-American in accent and body language that it’s uncanny. Idris Elba likes to relate stories of men on the street in Baltimore coming up to him, wanting to congratulate him on his role in “The Wire,” and freaking out when he’d reply in his native British accent. Harris is likewise gifted.

This is a rip-roaring, fast-paced thriller, with much action and no gratuitous violence. It may be shot in muted blues, browns, and grays, but throughout, Alicia’s no-holds-barred attempt to uphold the law shines a light in the dark. The racial overtones might be a bit heavy-handed, but it never hurts to have America have another look at race issues.