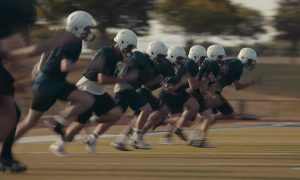 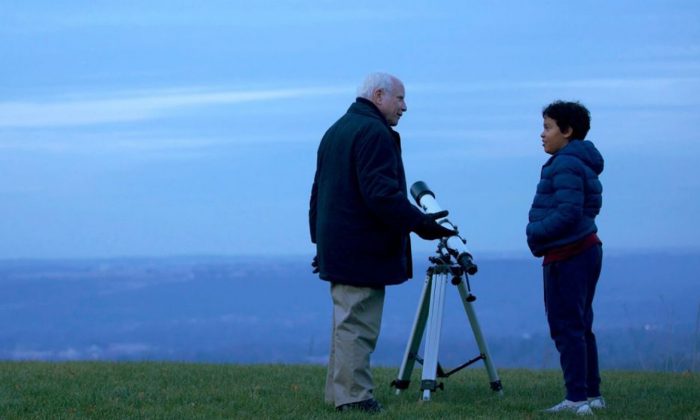 A wistful examination of age and aspirations
By Ian Kane

Many youngsters gaze up into the stars and fantasize about blasting off into space one day. Having an amateur astronomer for a grandfather, I was one of the few kids who didn’t, because he’d bestowed upon me knowledge about the dangers of space travel. Nowadays, due to developments in the commercial space-travel industry, spaceflight for ordinary folks is achievable.

In director Shelagh McLeod’s new film titled “Astronaut,” the issue of attainable spaceflight by regular civilians is fully explored, as are matters of advanced age and health.

For star-gazing youngster Barney (Richie Lawrence, “The Detail”), blasting off into the heavens is a very real ambition. Little does anyone know (including Barney’s parents), that his 80-something-year-old grandfather, Angus (Richard Dreyfuss), also has had space travel as a longtime goal.

When his family begins executing their plan of tossing him into a convalescent home for the rest of his days, Angus lets Barney in on his big secret. Angus even gets his grandson to lie about the old man’s age so that Angus can enter a contest that might allow him a last shot at his life’s dream.

The beginning acts of the film are especially touching. Having recently lost his wife, Angus has been forced to rely on his daughter Molly (Krista Bridges, “Land of the Dead”) and her family for food, shelter, and other necessities.

While he dreamed of becoming a trained astronaut during his younger days, now he merely assuages his grief (over his wife as well as his failing health) by staring out at the nightly stars.

Suddenly, the company running the competition he entered, which entails offering one free seat on its first-ever commercial flight into space, notifies Angus that he’s the lucky winner. Of course, if the company knew his age and health problems, he wouldn’t have won.

While the film glances at the moral issue involved—What about the other people who were eligible for that one spot onboard the space shuttle?—its thrust is on seeing the elderly as full human beings, just as able as anyone else to hold on to their aspirations, just as able to enjoy the fulfillment of their lifelong dreams.

Why Another Astronaut Flick?

I hadn’t known about this film until just before seeing it. As we’re in the midst of the 50th anniversary of the famous Apollo 11 mission, there have been a decent number of astronaut-themed releases with much bigger budgets.

“Astronaut” piqued my interest, however, because of its premise. It seemed like one of those quirky indie films that would be all about character development. And its message about not giving up on your dreams—no matter your age—intrigued me.

The character development was pretty decent. There were also touching bits and snatches of writing and acting that pulled on the heartstrings, without being over-the-top or melodramatic. Laughs were in short supply, yet the film didn’t seem to take itself too seriously.

In a more general sense, the film also touches on adjusting to getting older and the compromises and obstacles that the elderly have to deal with. Angus’s interacting with his daughter’s family is one of the main focuses of the film.

Although I enjoyed how the family dynamics played out, Dreyfuss really stole the movie and showed that he still has what it takes to suspend a filmgoer’s sense of disbelief. In less capable hands, Angus could have been portrayed as just another old grouch. But here, you are treated to an affecting performance of a man who is so enamored with his dream that it’s easy to find yourself rooting for him.

While the production values of “Astronaut” are quite good for an indie endeavor, one drawback is a slight lull in the storyline. About midway through, the film veers off from its powerful buildup and begins to meander into an entirely new narrative. It’s not as jarring as it sounds, but the director could have stuck to the original premise more closely.

However, in all, this is a fine film for all ages.