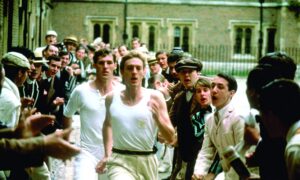 Film Review: 'Chariots of Fire': In Celebration of the True Spirit of the Olympics
0 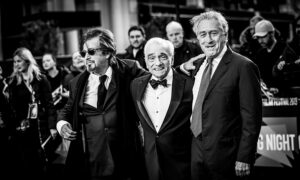 Film Review: ’12 Angry Men’: A Prime Example of Not Bowing to Peer Pressure

If you look up “courtroom drama,” the definition has a photo from “12 Angry Men” next to it, illustrating the genre. I’d never seen this quintessential entry. I needed to see it. If you’re looking for an example to show your kids of how to resist peer pressure—look no further.

On the hottest day of the year, an all-male juror team parses, debates, and decides the fate of a young minority of uncertain ethnicity, who’s been charged with murdering his dad with a switchblade. Where? New York City. Where else did switchblades exist in the 1950s, especially those wavy-bladed, serpentine types that have Chinatown written all over them?

The whole hour-and-a-half film claustrophobically plays out in black and white, in a downtown jury room, and basically schools the audience about the principles of reasonable doubt, innocent until proven guilty, fair trial, civic responsibility, moral stature, composure, impartiality, and so on. It plays like theater. It uplifts and reminds us of our duties as free—and free-thinking—ethical human beings living in a democracy. They don’t make them like this anymore.

The camera starts a journey from atop the black, defunct electric wall fan, which shouts: Hottest day, no air conditioning—these men are literally hot under the collar!

Then, as the room fills with the titular 12 angry men, it slowly swoops down and introduces them, finally coming to rest on Juror 8 (Henry Fonda). Something about Fonda’s face nagged me. Then I realized what it was: Fonda was to Clint Eastwood what Robert Redford was to Brad Pitt—the first edition of that particular archetype. Model 1.0.

This is the 1950s, when prejudice and ignorance were rampant. However, it must also be said that, because everything in the universe is paradoxical (everything contains, at one and the same time, itself and its opposite), the 1950s were also largely considered to be the last decade of moral decency. That said, 11 out of 12 men’s knee-jerk reaction is that it’s an open-and-shut case. Because who wants to sit in that sauna and debate a case nobody could care less about?

Number 8 cares, to the immediate and severe aggravation of the rest of the herd. Fonda glows white-hot with righteousness and moral indignation at the collective complacency, and yet remains so balanced with humility, honesty, and openness that what would normally grate—doesn’t. “We’re talking about somebody’s life here. We can’t decide in five minutes. Supposing we’re wrong?”

The men debate the case every which way, evidence and exhibit material is requested, and re-enactments are staged, such as whether a limping man could get from his apartment to the hallway in 15 seconds. No! He would have needed way more time!

Could imminent-homicide shouting be heard over the infernal din of that L-Train? Did that older female witness, who wasn’t wearing glasses during the trial but nevertheless had those indentations on her face that spectacle wearers have—would she have been able to see a murder happen across a train platform, in the middle of the night? Through moving train windows? Especially when she (as in “The Night Before Christmas”) ran to the window “in a flash, tore open the shutters, and threw up the sash,” and clearly wouldn’t have put on her glasses?

Evidence is so painstakingly debated that we start to feel like we know as much as this jury knows. Votes are taken throughout, and what started as 11 to 1, gradually flip-flops to the exact same count, in reverse.

It being the 1950s, references to America’s favorite pastime abound. The schlubby, crass, Noo-Yawkisms-spouting baseball fan, Juror 7 (Jack Warden) needs to get to a ballgame later. He cares way more about his precious game than the life of the kid on trial and advantageously flips his verdict just to expedite the proceedings. When it looks like the debate will be protracted, it’s referred to as “going into extra innings.”

Henry Fonda is the sole high-wattage star (and partially financed the film out of his own pocket), but the rest of the jury are the Hollywood A-list character-actor heavy hitters (there’s a baseball reference) of the day.

The cast includes a pack of classic, 1950s hat-and-briefcase white-collar types, and ready-to-punch blue-collar-type males. They all have two things in common: They all smoke, and they’re all manly. There’s the wisecracking Madison Avenue adman (Robert Webber); an emotionless, logic-bound, glasses-wearing stockbroker (E.G. Marshall); a vociferous blowhard (Lee J. Cobb, looking like a cross between Paul Newman and Rodney Dangerfield), whose deep issues with his son drive his desire to send the convict in question to the electric chair.

When Juror 7 changes his vote in order to get to his game on time, Juror 11 (George Voskovec), a watchmaker and an immigrant, who has until now been cowed by not feeling he belongs, erupts with righteous indignation, asking No. 7 where he gets off playing with a man’s life like that. He reminds us all, from the immigrant perspective, of how remarkable—and to be cherished—democracy is.

Juror 10 (Ed Begley) finally can’t take it anymore and launches into a vitriolic, racist rant. As he continues to spew hatred, all the rest of the men, one by one, stand up and turn their backs on him.

Not even the jurors who deem the young man (who could be Greek, Spanish, Italian, Iranian, Palestinian, Jewish, Indian, Arabic, Mexican, Native American, mixed race, and so on—basically a brown human) guilty, refuse to acknowledge the torrential hate speech. While many of them had used the phrase “these people,” after his mirroring their various degrees of prejudice back to them, the phrase is never used again. It’s a scene to restore faith in humanity.

We never see the trial itself, just a quick scene of the bored judge instructing the jury, and a quick epilogue. It’s never said whether that young brown man is guilty or innocent.

“12 Angry Men” is 100 percent about extracting reasonable doubt from the evidence. There’s no action; it’s basically logic, decency, integrity, impartiality, authenticity, and compassion—up against emotion and prejudice. And yet, regardless of a lack of action, it moves.

The conflict is high throughout, and whereas the film could have easily slipped into soapbox preaching and proselytizing, the human foibles of a toxic father-son relationship, and toxic prejudice, are presented as just that—let he or she who is without those things cast the first stone. Juror 3’s projection of anger regarding his estranged son eventually demonstrates the fact that anger is a secondary emotion. Buried underneath are powerful feelings of betrayal and being hurt to the quick by the physical altercation he had with his son and the subsequent irreparable rift.

In the end, it’s Fonda’s character’s forbearance—in the face of overwhelming opinion, daring to be unpopular, speaking his truth and not backing down—that allows each man, in his own time, to have a moment of enlightening to a truth that resonates with him and engenders doubt in his soul.

“12 Angry Men” puts the full range of human virtue and vice, good and evil, on display. It posits that, ultimately, the universe is benevolent and that our job, regarding each other, is to attempt with our best effort and greatest compassion to elucidate and clarify the truth.