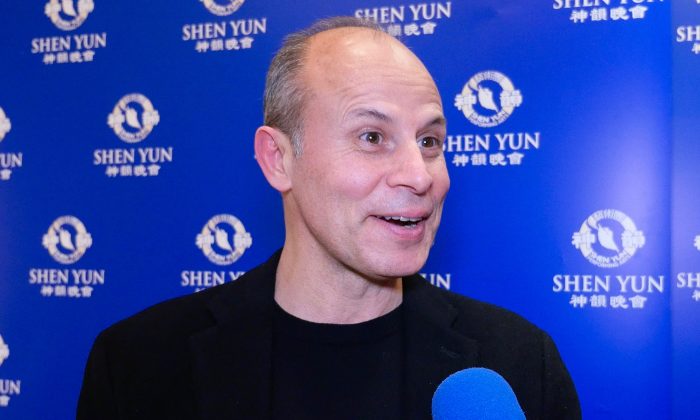 “I loved the dynamics of it and the choreography; the synchronization was perfect,” he said. “Colorful, beautiful, everything.”

Shen Yun, based in New York, is the world’s premier classical Chinese dance and music company, but Shen Yun is so much more. An orchestra that blends classical Western instruments and traditional Chinese instruments, and state-of-the art digital backdrops give the audience a complete theatrical experience.

“These digital backdrop designs complement and synchronize all aspects of the performance: the characters, color of the costumes, specific dance movements, props, lighting, the story being told, particular notes played by the orchestra, and special audio effects,” the Shen Yun website states.

As a film producer, Mr. Carosso appreciated the effects of the backdrop. “I liked very much how [Shen Yun] inter-played the background with the dancers and the setting and everything,” he said. “I’ve never seen that kind of background integrating with the stage. It works so precisely. I kept thinking, how can I use that in my films?”

Mr. Carosso has been in film production since the late 1980s and has studied at NY Film Academy. He has had films in film festivals and currently has a number of feature-length screenplays.

The Shen Yun orchestra also struck a chord with him. “The orchestra and music—I like the integration of the West and the East in the music, the classical music. It was spectacular!”

For Mr. Carosso, Shen Yun was unique and educational. He saw a glimpse of China’s millennia of culture and history in the mini-dramas presented through dance.

“Every single one was very, very interesting,” he said. “I’m going to go home and I’m going to think about all of these stories. It’s beautiful,” he said.

“I’d like to see it again. It’s extraordinary. It’s something I think many people should see,” he added.

In Love With Shen Yun

Thiago Gomez, a wedding-dress salesperson, fell in love with Shen Yun. For him, there was so much to love.

“It’s beautiful, and there’s so much cohesiveness. The dresses … fit the mood perfectly. And there’s the colors—they’re so bright and light, and the movement is just so romantic,” he said.

“What I loved about the costumes is that they’re so different. Sometimes they’re stiff. Sometimes they’re very airy because the movement needs to fit. Sometimes [a costume] represents water, and it glides through the air beautifully. The colors just match with the background too. It’s just very, very appealing to me—absolutely!”

With hundreds of new handmade costumes each season, audiences are often left in awe.

“Every detail is given meticulous attention and is a result of artistic inspiration and careful polishing,” the Shen Yun website states. “The designers stress harmonic balance and contrast. Their objective is an authentic presentation of the attire that comes from China’s divinely inspired traditional culture, and a consummate stage effect.”

The beauty of the performance was displayed in many ways for Mr. Gomez. “The opening of the second act—I got goose bumps when the fog came, and the orchestra at the bottom—I loved it! It was amazing,” he said.

“I see a plethora of feelings. I see romance. I see heavenly beauty, I see something earthly. Sometimes conflict, too, between the characters [in] the drama that’s playing out in each act,” Mr. Gomez said. “It’s just amazing. I’m just in love with the show.”