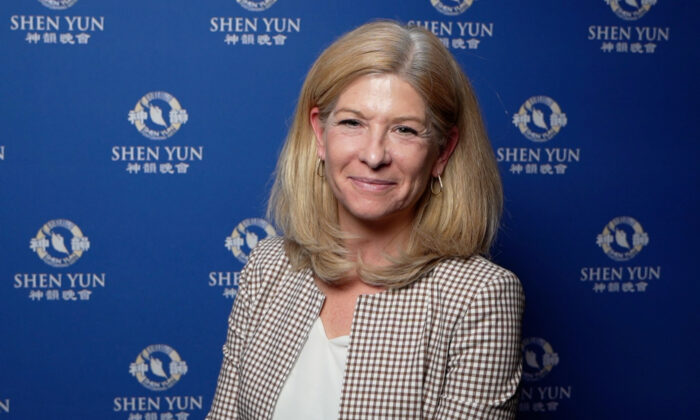 BALTIMORE, Md.—“It was really exceptional. I was really, really blown away. It wasn’t anything that I expected and it was a super, super surprise for a performance,” said Catherine Lorenze, a film producer.

Shen Yun was presenting 5,000 years of China’s authentic classical and ethnic dances and music at The Hippodrome Theatre in Baltimore.

As a writer and communications expert with 20 years of experience in radio/TV production, Lorenze appreciated the technology and choreography incorporated into the production of Shen Yun.

She was amazed by Shen Yun’s patented backdrop projection which allows for seamless interaction between the performers on the stage and the projection.

“I thought it was so incredible how [Shen Yun] incorporated that into the story and how the characters come alive off the screen and pop up from down below the stage. It was excellent and really well done.”

The artistry in the dances, the costumes, and especially the techniques used for the big screen and animation were inspirational, said Ms. Lorenze.

‘[I was] not only entertained but really inspired and incredibly captivated because the dancers are so exceptional …  their acrobatic movements and they are so light on their feet. So it was very educational from that perspective,” Ms. Lorenze said. She was surprised to learn many of the movements in traditional Chinese dance had been incorporated into ballet.

China was once known as the Divine Land, and it was believed that divine beings imparted their heavenly culture to the Chinese people. Shen Yun illustrates this culture with scenes that include immortals and deities, such as Buddhas and Daos.

Ms. Lorenze said that she was unaware that Chinese culture was divinely inspired.

While Shen Yun showcases stories and dances from China’s past, it also presents more recent events such as the Communist regime’s persecution of the peaceful practice of Falun Dafa.  Falun Dafa is an ancient spiritual way that upholds the principles of truthfulness, compassion, and tolerance.

The dance that depicted the persecution was “incredibly striking and very moving … quite shocking because it’s so real,” Ms. Lorenze said.

“I thought that was incredibly thought-provoking and beautifully presented in terms of its seriousness and yet bringing it across in a very artistic manner. Very well done,” she said.

“It was wonderful on so many levels,” said Karol Smith, a portrait painter, who had also been watching Shen Yun.

“As an artist, I loved the costumes. [The colors] are beautiful.”

“The plum flowers [‘Plum Blossoms in Spring’ dance], those were gorgeous …  and the choreography—the precision is remarkable.”

Ms. Smith was also stunned by the effortless flips and tumbles performed by the dancers.

“There wasn’t a sound on the floor. I don’t know how they do it,” she said.

That was beautiful music, that was an adventure.
— Karol Smith

Shen Yun’s soloist playing the traditional two-string erhu, also called the Chinese violin, caught Ms. Smith’s attention as she had never heard it before. “That was beautiful music, that was an adventure,” she said.

“What a wonderful way to spend an afternoon or an evening. I didn’t anticipate it to be so amusing in so many parts, and educational.”

“You can’t help but feel good afterwards,” Ms. Smith said, adding that she could have continued watching Shen Yun for yet another hour.