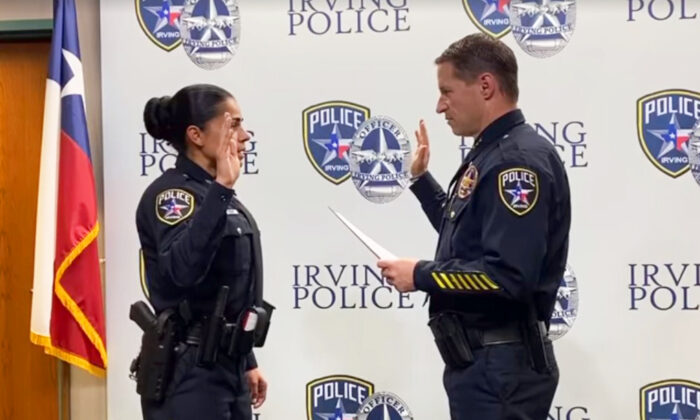 A touching video shows a female police officer during her swearing-in ceremony, unaware that the police department had the most wonderful surprise in store for her. During the ceremony, her son, a soldier who’d been deployed overseas, walks in unexpectedly, and overcome with emotion, the mother cannot contain her tears.

The newly recruited Irving Police Officer Erika Benning hadn’t seen her 21-year-old son, Army sergeant Giovanni Pando, in over two years. The young man had joined the military as soon as he finished high school and was serving overseas in Germany, CNN reported.

In the video posted on Facebook by the Irving Police Department in Texas, Pando unexpectedly appeared at his mother’s swearing-in ceremony on Friday, Jan. 31, 2020.

With a caption that read, “All swearing-in ceremonies are special but every once in a while one tugs at your heartstrings a little more than others,” the clip shows Officer Benning breaking down in tears before happily allowing her son to pin her badge.

“When my son came around the corner, and I realized that this was real, my breathing just started to slow down, and everything just felt really tight,” Benning recalled.

Posted by Inspired on Wednesday, February 26, 2020

Being able to attend such a pivotal moment in his mother’s life meant a lot to Pando. “It was overwhelming. I felt every emotion you could think of just from being happy for her and also missing her. I was also trying to keep my composure as well,” he said.

Benning explained how she had always dreamed of serving on the force. However, having a child as a young woman put those plans on hold. She finally achieved her lifetime goal at the age of 43, when the ceremony took place.

The young man described his mother as an inspiration and said he hoped to follow in her footsteps by joining the force after completing his military service. “She’s never let something stop her from achieving what she wants. And while raising me, that’s always something she’s preached to me,” he added. “If you want something, work for it, and you’ll achieve your goal.”

Organizing such a beautiful reunion and keeping it a secret up until the ceremony was a joint effort between the Irving Police Department and Officer Benning’s husband. Jeff Spivey, the Chief of Police, told NBC how much the surprise meant to him. “It was a true honor to be a part of something so powerful, that meant so much to one of our new police officers,” he explained.

The heartwarming video of the unexpected reunion went viral and, at the time of writing, has an outstanding 4.3 million views and 50,000 shares on Facebook. Over 6,000 people commented and expressed how touched they were after viewing such a special moment.

Another stated, “God bless them all. [Obviously] where her son learned about serving others!”

One particularly poignant comment remarked, “I love these reunion videos, always make me tear up. I love seeing the happiness and love between the loved ones. Its love in raw form, just so beautiful.”