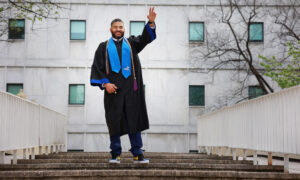 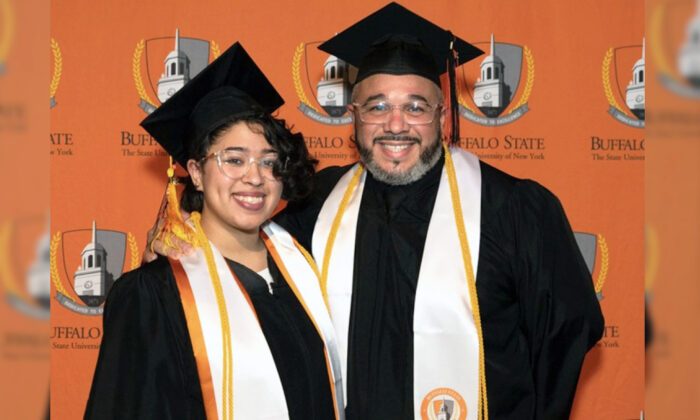 Father, 41, Graduates Alongside His Daughter: ‘I Didn’t Think I Was College Material’

A 41-year-old father of two has graduated alongside his daughter and credits her for encouraging him to pursue his dream. The close-knit pair supported each other through their studies, and both graduated with honors.

“I didn’t think I was college material,” Cesar Galarza admitted to the Buffalo State College’s website. A welder by trade, and senior pastor at West Side church, Cesar was keen to become a social worker.

His daughter, Clarimar Galarza, who loves ceramics, knew the art education program at the Buffalo State College was perfect for her.

The father-daughter duo pursued bachelor’s degrees at New York’s Buffalo State College and on May 15, their names were called out during the college’s virtual commencement ceremony.

Cesar initially had questioned whether he was too old to go to college, until his family convinced him; he then finally took it seriously. He first received a GED and an associate’s degree from SUNY Erie Community College (ECC) and then transferred to Buffalo State in the fall of 2019. He soon began to fall in love with the courses and developed a passion to help others.

In reality, it was “fantastic” to go to school with his daughter, he said; if they felt overwhelmed, they had one another to turn to.

“We knew we weren’t alone,” Cesar said. “If we got tired or felt like it was all too much, we’d talk through our assignments and everything.”

The pair also drove to campus together and shared lunch whenever they could, yet Cesar joked it was sometimes hard to wrench his daughter away from the ceramics studio.

The pandemic presented a huge obstacle. “We went through school during the toughest time, but we overcame,” Cesar told Good Morning America. “She did better than me … I did pretty good, but she always did better than me.”

The father of two moved his family to Buffalo from Puerto Rico in 2008 and had to overcome a language barrier to study at Buffalo State. He had to learn to write in English but was able to achieve it with the help of his supportive wife of 24 years and 15-year-old son who helped by proofreading his papers.

Clarimar, for whom English is also her second language, was keen to teach in a bilingual environment. In spring 2021, she landed a teaching placement at Dr. Martin Luther King Junior Multicultural Institute.

“I was very lucky that my professors and mentors knew I wanted to get experience teaching bilingually,” she said.

The graduate now wants to teach art at the elementary school level, claiming art is “like magic” to children. “I love getting to teach them about art from the starting process,” she explained. “It’s so much fun to see them learn and grow.”

Meanwhile, during the spring of 2021, Cesar got an opportunity to work with the local students at Compeer mentoring program at Maryvale High School, calling the internship a “blessing” as he wants to work with youth.

During her years at university, Clarimar received three art education scholarships and two awards for excellence. She made the dean’s list every semester since starting at Buffalo State in 2017.

Also making the dean’s list every semester, and earning the Excellence in Social Work Award upon graduation, Cesar’s college fears have long been laid to rest. He has even been accepted into the graduate program at the University at Buffalo’s School of Social Work, where he will pursue a master’s degree.