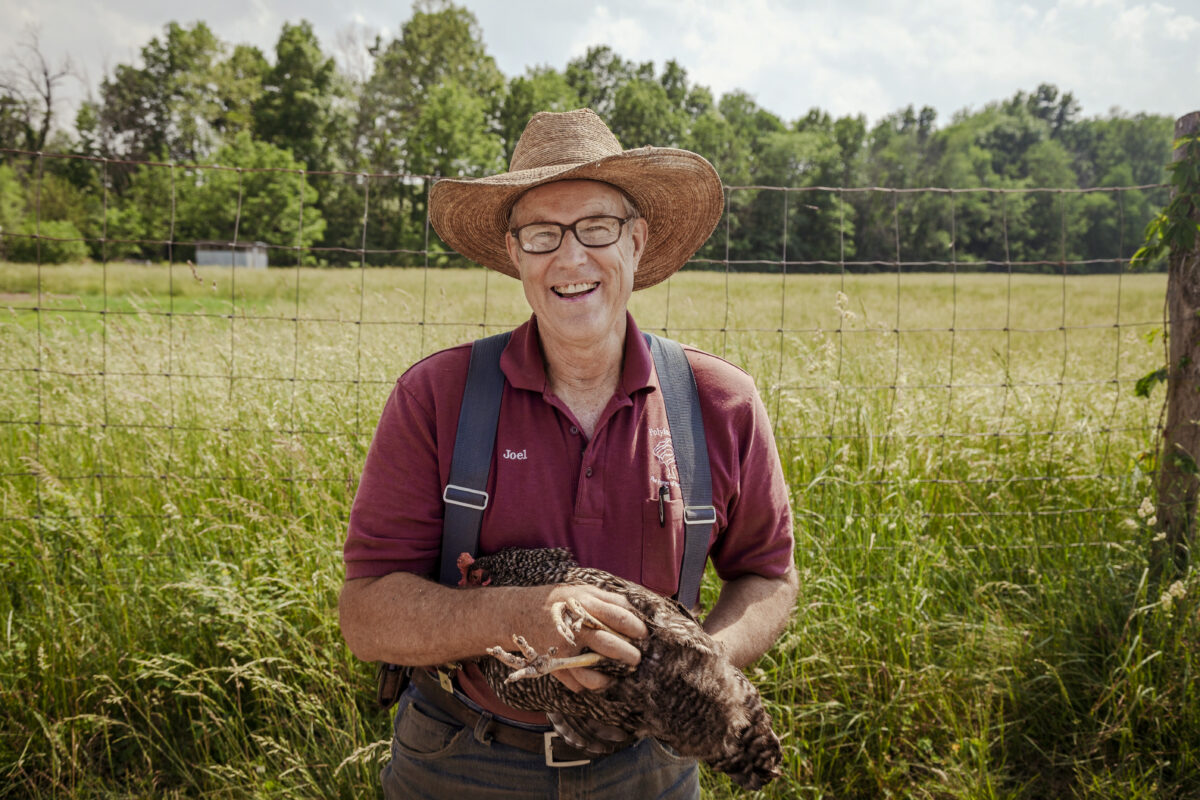 Joel Salatin is a fierce advocate for farming that is in tune with nature. (Courtesy of Polyface Farm)
American Essence

“No occupation is so delightful to me as the culture of the earth.”
—Thomas Jefferson

Polyface Farm lies gently among the rolling hills of the Shenandoah Valley of Virginia, near Little North Mountain and Elliott Knob, in Augusta County. This land beneath the mountains is a beautiful patchwork quilt of fine pastures and forests, and it nurtures a dream as old as America yet as young as the many faces stewarding it.

In the early days, a large number of Americans lived connected with the soil. Even lawyers and professional people raised crops. Washington, Jefferson, and Charles Carroll of Carrollton not only helped found our nation; they were instrumental in developing its agriculture. Today, only a small percentage of our population farms—as crop yields have increased, fewer of us need to. This in itself is not a bad thing, as more people are freed up for other important and creative endeavors. But the average farmer today is aging, and going it alone. Farm children often have gravitated to cities, looking to make more money with less risk and shorter hours. The family farm will die with its farmer.

At the same time, young people are discovering their love for the land. Ironically, many of them come from non-farming backgrounds. They want to work the land—but they don’t have any. Land is prohibitively expensive these days. An aspiring farmer will often be told, “You have to get a factory job to afford to farm.” The sad truth is that even with land, only pennies are made per bushel of crop after expenses.

Farmers today are merely producers of commodities. They don’t engage in marketing, sale, or distribution of the commodities—but that’s where the profit is. Joel Salatin understands this, and he’s on a mission to teach young people the joy of farming. To do so, he addresses the barrier that many next-generation farm families face: The reality they’ve inherited is simply not sustainable. Salatin is a “voice in the wilderness,” a man ready to show aspiring young farmers “a more excellent way.”

A Bit of History

Upon visiting Polyface Farm, I stepped into the farm store and was warmly greeted by Grace, a young lady and a student of people. “I remember speaking to you on the phone,” she said. Many have learned that we ought to know our food producers, and she wanted to know her customer. People skills underlie the mission statement of the farm itself, as my pleasant first contact illustrated. In addition to fresh eggs and pasture-fed meats, the store features 11 farming methodology books, written by Salatin so he supposedly wouldn’t have to keep explaining how to build mobile chicken shelters or maintain pastures. Farming methodology is important, but it turns out there’s much more to it than that.

When I sat down with Salatin, he led with a lesson in economics. “Back in the 1960s, you could buy farmland for $95 an acre or less. An acre of land was needed for a feeder calf to produce $95. That meant the first-year sale covered the cost of the land, essentially.” Today, land may cost thousands per acre, while selling an animal nets only a few hundred dollars; it’s not sustainable, and families are tempted to sell their land to developers. Neighboring farms disappear while older farmers continue making pennies on the dollar. “You cannot survive by merely being a producer. You need to produce two incomes,” explained Salatin. “A farm needs to support two generations or it cannot survive.” One way to achieve that is by filling more roles. Processing, marketing, sales, and distribution are great moneymaking opportunities, but tapping them takes people skills. “You can’t be this old guy who loves being alone on his place—who gets along better with his tractor than with people,” said Salatin.

When the Salatins settled in Virginia in 1961, the farm was eroded and rocky, but Joel’s parents prioritized conservation. Eschewing chemically dependent, high-volume, low-margin commodity agriculture, they built a pasture-based, direct-marketing farm, composting and selling directly to customers. At 10, Joel bought his own flock of chickens, and within a few years he had a nice little business selling eggs. In summertime, he’d sell his own vegetable crops at the farmers market. Young Joel developed his entrepreneurial skills under the mentorship of his father. He also developed relationship skills; his life revolves around serving people, and it keeps him busy on many fronts. “Quality must always go up,” said Salatin. Moreover, “good relationships must be built with customers, and with those who work alongside you. You cannot be driven by sales targets.”

The Heart of a Farmer

Around the farm, several young people tend to chores, working happily and respectfully. They come to Polyface Farm to learn by joining its stewardship program. Many discover the opportunity online; the farm’s website is briefly open for applications every year during the first 10 days of August. By answering 10 questions and submitting a video recording, applicants have a chance to be invited to the farm for a two-day trial visit. While eating, sleeping, and living at the farm, they demonstrate whether they’re likely to be the right fit for the farm’s culture, community, and character. Most don’t have farming backgrounds; it’s more likely that their previous experience is urban. “They come with MAs and MBAs,” Salatin reported. The first two questions applicants answer establish what they’ve been up to and how they got interested in farming. Those looking to “find themselves, right some wrong, or ‘have an interesting experience’ are weeded out—hopefully pretty quickly,” said Salatin. “The single biggest way relationships fail is unexpressed expectations.”

Considerable effort goes into outlining leadership’s expectations for the would-be mentees. “If you expect them to get up at 5 o’clock, you need to spell it out,” said Salatin. Along those lines, participants aren’t bound to stay for the entire session if it isn’t a good fit for them, and leadership may dismiss them as well. As Salatin put it, “One of the biggest problems business owners tell me about is prolonging a situation that should have been nipped in the bud.”

The stewardship program runs from May through September, and late arrivals aren’t permitted. Stewardship is an apt description: gathering eggs, moving cattle to fresh pastures, building mobile chicken shelters—it’s a summer of learning by doing. Participants work hard and acquire many skills. Halfway through, they can apply for apprenticeships, but only a handful are accepted each year.

Apprentices spend winter in intensive study and can follow their own interests. For example, “One of them gravitated toward helping Leona in the freezers, freeing her up for more computer work in the shipping department,” said Salatin. The American entrepreneurial spirit is always encouraged. Many apprentices develop business ideas that can be pursued at the farm—like farm tours. After one young lady began giving school tours, she thought to herself, “People will pay to tour this farm.” Now, she regularly gives tours to all kinds of people. It’s her business; she pays a percentage to the farm, but she works for herself. Helping young people pursue their passions is one of Salatin’s own passions.

Each winter is a time of intense personal development. Apprentices work on their skill sets, and Salatin’s son Daniel leads them through each chapter of “Extreme Ownership,” a book written by Navy SEALs. Stephen Covey’s “The 7 Habits of Highly Effective People” is also referenced quite a bit. “You have to have the heart of a teacher to do this well!” said Salatin. “You can’t be doing it to get free labor—it doesn’t work.” Apprentices learn to teach others and then go on to help the next year’s stewards.

While farm internships run the gamut from simple immersion to detailed instruction, Polyface Farm addresses the complex nature of farming today, exploring business skills and strategies for sustainable farming in the real world. Topics range from establishing operations on rented land and negotiating a minefield of regulations that can hamper food processing or sales, to building a house from harvested timber. “You make the stars align by immersing yourself in your passion, now,” said Salatin. The strategies he encourages apply to anyone with a vision, not just aspiring sustainable farmers.

Others have advised Salatin to charge thousands for this education, but he refuses. Instead, stewards are paid small stipends, covered by workman’s comp, and provided with comfortable housing and meals prepared by a professional chef. At dinner—where cell phones are prohibited—they bond as a team. They also attend weekly meetings to keep everyone apprised of expectations, and there are monthly formal lectures. Salatin said that while new stewards cost the farm money, they’re making money by the end.

Apprentices are well-compensated, and a few find entrepreneurial ideas that mesh with the fabric of Polyface. They’re encouraged to develop those plans as personal businesses, and some strike out on their own. A local church recently prayed a blessing over one such couple and their infant. They were heading for Kansas, where they secured land leases to pasture cattle. They also planned to raise sheep and have more of their family join them. Salatin said, “You can begin mentoring at any stage.” New mentors should openly say, “We’ll learn together.”

Salatin was sad for a moment. “You know, most farmers my age are alone,” he said. “There is no one for them to mentor.” After reminiscing for a bit, however, his face lit up as he spoke of how wonderful it is to still be surrounded by young people. His smile said it all. His passion is for more American farmers to share their expertise with the next generation—anyone eager to keep small farming alive.