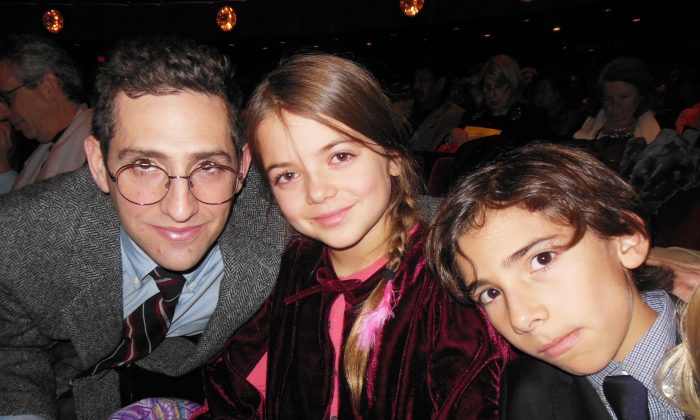 NEW YORK—Artist and CUNY lecturer Xico Greenwald is a great lover of diversity in art, having worked with, curated exhibitions of, and taught on visual art of all sorts.

As a birthday outing for his 9-year-old son Fabian, Mr. Greenwald took them to see Shen Yun Performing Arts at the David H. Koch Theater at Lincoln Center on Jan. 16.

Ancient Chinese once believed in harmony between heaven, earth, and humankind. Principles from the religions of Buddhism and Taoism became the foundation for society and culture, as Shen Yun’s website explains. Artists, too, believed in and put into practice respect for the divine in their art.

But when communism took power in China some 67 years ago, such traditional beliefs were suppressed by the officially atheist regime.

In Shen Yun’s performances, these traditions are resplendent on stage through classical Chinese dance, costumes depicting celestial garb and clothing of the dynasties, and an orchestra blending Eastern and Western sounds.

Mr. Greenwald and his son enjoyed seeing the different aspects of the culture. For instance, the Manchurian fashionistas of the 17th century sported high heels with no heel at all. Called flower-pot shoes, these had a four inch raised platform in the center of the heel. Walking in these shoes requires elegant self-control.

“In my heart, I feel happy that my son is enjoying himself. I am happy for us all to be here,” Mr. Greenwald said.

Sarah and Ron Rudaitis also brought their young son to see Shen Yun. It was a particularly special occasion, Mrs. Rudaitis said, because 7-year-old Henry had wanted to see it for years.

He thought the performance was just made of goodness.

“The dancers were awesome and I just like the dancers because it’s wonderful, and it’s a great show,” he said. “I want to go meet the dancers right now.”

The parents loved it too.

Mr. Rudaitis, a high school teacher, thought it was spiritual and emotional and showed how “wonderful and special life is.”

“The stories tapped into core emotions, and it’s poetry. Really it’s beautiful,” Mr. Rudaitis said. “The message from the whole show is really to open yourself up to the spirituality in the world. The world is a beautiful place if we listen to it and look for it.”

Mrs. Rudaitis said it was a stunning display of life.

“Oh it was stunning,” Mrs. Rudaitis said. “The message was about enjoy each moment and enjoy how precious life is and how beautiful it can be with a spiritual journey.”

Mrs. Rudaitis said she was inspired to “enjoy the beauty of each day and each moment.”