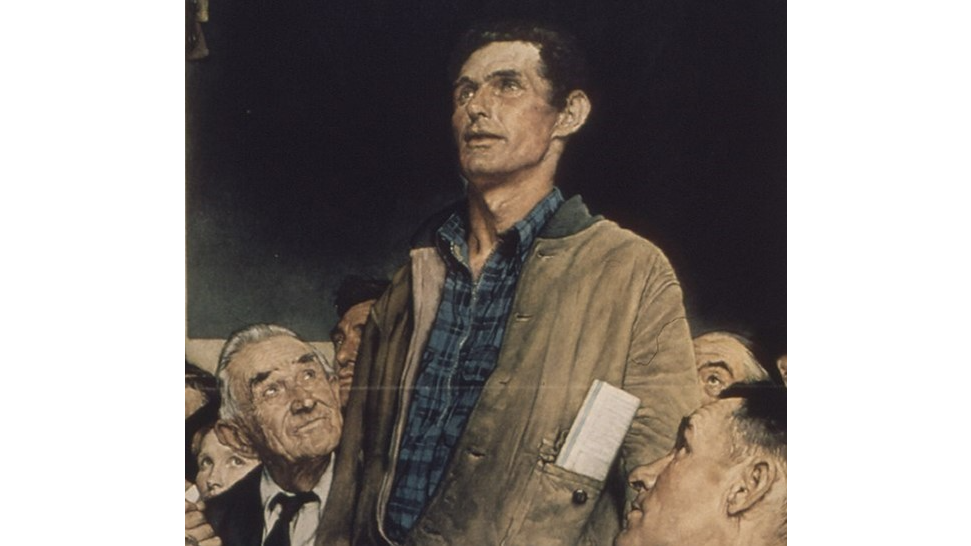 In the winter and spring of 1942, America and her allies were taking some hard punches.

The Germans had renewed their offenses in North Africa and the Soviet Union, and their submarine warfare in the North Atlantic inflicted catastrophic losses on convoys sailing from the United States to Europe and Russia. On the other side of the world, the military forces of the Japanese Empire swept across the Pacific, seizing Singapore—arguably the worst defeat in the history of the British military—besieging and then conquering the Philippines, and threatening to invade Australia.

Alarmed by these dire events, illustrator and artist Norman Rockwell was determined to do what he could to help turn the tide using the weapons at his disposal. He picked up his brushes and began to paint.

In his annual address to Congress in January 1941, nearly a year before Pearl Harbor, Franklin Roosevelt spoke of four universal freedoms—the freedoms of speech and worship, and the freedoms from want and fear. Inspired by the president’s “Four Freedoms Speech,” as it came to be called, Rockwell worked to bring those concepts to the canvas.

His “Freedom of Speech” depicts a Lincolnesque figure standing erect in what appears to be a town meeting. He’s clearly a working man, ruggedly dressed, his fingernails black with grime. Seated around him, men in jackets and ties give this young speaker their respectful attention. “Freedom of Worship” differs from the other three paintings in the set. This painting has no storyline, but instead features a collection of profiles prayerfully facing a bright light.

And unlike the others, this painting bears an inscription: “Each According to the Dictates of His Own Conscience.”

“Freedom from Want” is perhaps the best-known of this quartet. It features a family, all smiles and grins, gathered around a Thanksgiving table while Grandmother serves up the turkey and Grandfather waits to slice it. At the bottom right corner of the canvas, Rockwell himself merrily peeks out at viewers. “Freedom from Fear” features a mother and father at the bedside of their sleeping children. The mother is pulling the covers up to the chins of the sleeping youngsters while the father solemnly watches them, a newspaper in his hand with headlines about a bombing.

First published in The Saturday Evening Post early in 1943, these four paintings became a tremendous hit with the American public. Readers requested thousands of copies, and when the Post and the Department of the Treasury together launched a war bonds drive by sending the paintings on tour, more than a million people in 16 cities viewed Rockwell’s “Four Freedoms,” raising $133 million in bonds. Millions more reproductions were delivered around the United States and overseas.

As the Norman Rockwell Museum website tells us, these paintings now “reside in their own specially designed gallery space, inviting visitors to reflect on their inspiring message.”

Like those visitors, we too might reflect on these paintings. In many ways, their meanings are clear and timeless. “Freedom of Speech” and “Freedom to Worship” remind us of our First Amendment rights. “Freedom from Want” and “Freedom from Fear” remain aspirations applicable to all mankind.

In his address, Roosevelt said of the four freedoms that this “is no vision of a distant millennium. It is a definite basis for a kind of world attainable in our own time and generation.” Later, these freedoms became a part of the Charter of the United Nations.

Unfortunately, we live in a time and a place where this vision seems as distant as ever. The Chinese Communist Party and other totalitarian governments show no interest whatsoever in these freedoms, and even in our own country speech and religion have come under fire, with fear and humiliation employed as the weapons of suppression.

Yet Rockwell’s freedom paintings continue to breathe life and hope into the dream of liberty. They have even, for example, inspired several of today’s artists to bring his masterpiece into the 21st century by using the same settings and themes but with greater diversity of race. The faces have changed, but the spirit remains the same.

And then there are the more subtle messages in Rockwell’s paintings, implications rather than explicitly expressed ideas.

The Pillars of Culture

In “Fancies Versus Fads,” G.K. Chesterton wrote, “The family is the test of freedom; because the family is the only thing that the free man makes for himself and by himself.”

Two of Rockwell’s “Freedoms” hint at this bond linking family and liberty. In “Freedom from Want,” the grins and postures of that family around the Thanksgiving table shout out happiness and gratitude. Grandma is focused on settling that large turkey on the table, but the small smile on her lips bespeaks the pride and inner joy she takes in serving these children and grandchildren gathered around her table.

The two parents in “Freedom from Fear,” both looking a bit care-worn, regard their sleeping children with love and quiet concern. They stand between the light falling on the children and the darkness on the other side of the bed like a barricade between the forces of good and those of evil. This couple defines the meaning of parenthood: the love, care, and sense of responsibility.

Children, parents, family: These, Rockwell whispers to spectators, are the primary building blocks of culture and civilization.

The other two paintings also hold some subtle meanings, particularly for today’s audience.

In “Freedom of Speech,” the standing man is obviously the symbol of free speech, but we might also note his demeanor and that of his listeners. Unlike the raucous, emotional, and sometimes violent protests of our own age, here is a portrait of rationality and restraint in the public square, a willingness to listen to others without giving way to threats and curses.

Properly considered, the somber, illuminated faces of “Freedom to Worship” might make us remember that not only are we free to believe according to our conscience, but that faith itself is important. “Human passions unbridled by morality and religion,” John Adams once said, “would break the strongest cords of our Constitution as a whale goes through a net.” Were those words ever more significant to the existence of our republic than they are today?

The Personal Worth of the Human Being

In the middle of the most horrible war in all of human history, the men, women, and children in Rockwell’s “Freedoms” all radiate human dignity. This message may be hidden behind the more obvious themes of this work of art, but there they are, all of those qualities that mark us as a race: laughter, joy, apprehension, courage, love, and reverence. These portraits quietly invite us to search the faces and expressions of those around us—family, friends, strangers, passersby—for this same humanity, this same worth. This is, in fact, perhaps the most profound gift from the “Four Freedoms.”

Three years after painting the “Four Freedoms,” Rockwell gave a New Yorker interview in which he recalled the struggles he had giving these abstract concepts human form. “It was a job,” he said, “that should have been tackled by Michelangelo.”

I beg to differ. This project needed a talented artist who loved liberty and who could touch the hearts of millions of Americans.

And that artist was Norman Rockwell.