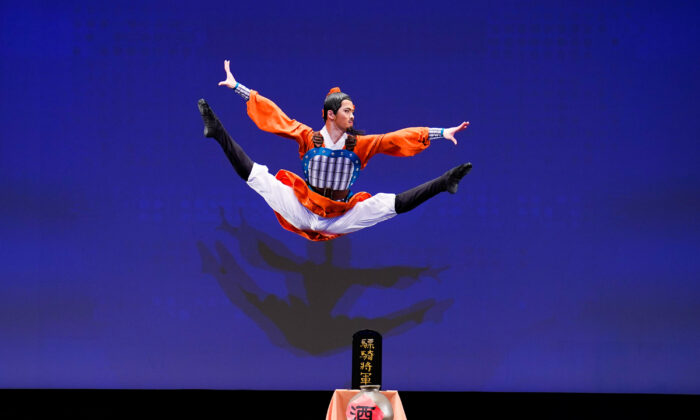 Faith Drives Dancer to Show World the Truth About China

China is more than what we see today, said Aaron Huynh, a classical Chinese dancer who went from barely understanding the culture to becoming a member of the world-renowned Shen Yun Performing Arts.

On Sept. 4, he took to the stage on his own at the NTD International Classical Chinese Dance Competition, and secured a place in the finals.

“I started from scratch,” said Huynh, who grew up in Australia and spoke English at home. “I didn’t have influence or exposure to Chinese culture.”

“It’s been a process of learning—to learn my own culture is worth learning even though I didn’t get to start off with it,” he said. “It was worth it.”

Classical Chinese dance is famously expressive, as a core principle of the art is having the inner feelings drive the body into motion. “In dance, you can’t just rely on your body, especially classical Chinese dance,” he said. Many dances portray people and times of the past, and “you have to know how they spent their lives in that period.”

Huynh’s understanding wasn’t always so well-rounded; he started off thinking if he got the movements right, and the general emotion down, he could dance. “But I slowly realized, it takes a lot of effort to show that depth. To be able to perform those characters, to act them, you have to understand them deeply,” he said. “Otherwise, when you show anger—it’ll just be anger, it won’t be anger and sorrow mixed in because you understand that from the past, something happened to that person before, so it’ll be one-dimensional and not multi-dimensional.”

Between the physically demanding routine of a dancer and the newfound cultural barrier, there were many times Huynh thought of quitting his study of classical Chinese dance.

It’s about how you can better help show the world what Chinese culture is.
— Aaron Huynh

“The people around me helped me, especially my teacher and my friends,” he said. “It took courage and hard work.” And humility, he added, and the breakthrough came when he realized it wasn’t just about him—his art was part of something greater. “It’s about how you can better help show the world what Chinese culture is.”

“It’s worth putting in all the effort, for the sake of showing them that China is a place more than what we see today,” he said. China in fact has 5,000 years of civilization, and its people believed it to be divinely inspired. And classical Chinese dance gives one the ability to speak clearly and deliver a message, even without saying a word, Huynh said.

“What we do at Shen Yun is not just about your individual self, it’s about showing people in the world that China is not only politics and cheap products, there’s so much more than what we know of China now,” he said.

Huynh explained that his faith, an ancient Chinese cultivation practice that teaches truthfulness, compassion, and forbearance, gave him conviction.

“Through studying Falun Dafa, which is the cultivation practice I believe in, I learned that it’s not only about you. We live in a world with everyone around us, and to do anything great we have to do it together,” he said. “One person will not be able to do that. And I feel that through Shen Yun, and Falun Dafa, it’s not only taught me dance, it’s showed me how to be a better person. Life itself is not important without meaning, and the profound belief that you can do something better than what you can do for yourself—you can do something for the sake of others.”

Huynh hopes one day to perform in China. “That’s their culture, and I hope they one day will be able to experience it,” he said.

In its efforts to recover and revive classical Chinese dance in its authentic form, Shen Yun has also pioneered the use of the ancient method “shen dai shou,” a way of movement that has the body leading the arms into motion. The expressive dance form has many continuous arm movements, and using this method transforms the stage effect of the dance, but also has many other benefits for the dancer, Huynh explained.

“It’s helped me a lot, not just because it makes my arms and legs longer, but because of that it’s not as hard to do movements. It’s easier, smoother. Once you use your body you don’t get stuck in weird spots, or use the wrong muscles,” he said. “The connectivity feels very different.”

Huynh performed in the NTD finals on Sept. 5.