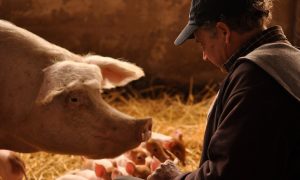 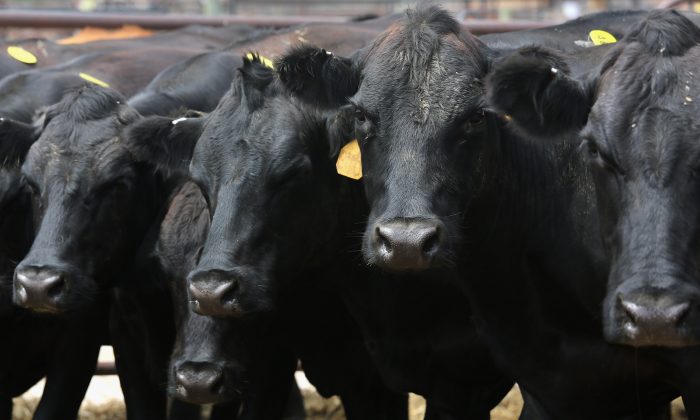 According to FDA figures, 80 percent of antibiotics sold in the United States are used on animals grown for food. (Scott Olson/Getty Images)
Health News

“We are approaching a cliff. If we don’t take steps to slow or stop drug resistance, we will fall back to a time when simple infections killed people,” said Dr. Michael Bell, deputy director of CDC’s Healthcare Quality Promotion in a statement.

According to a CDC report released in September 2013, more than two million Americans a year get infections that are resistant to antibiotics and at least 23,000 die as a result. While excessive prescriptions in human medicine play a large role, CDC says modern farming practices significantly fuel the crisis.

“Much of antibiotic use in animals is unnecessary and inappropriate and makes everyone less safe,” CDC stated.

In the 1950s, scientists discovered that small, persistent doses of antibiotics made animals grow faster and bigger. Later, more antibiotics were added to the regimen to guard against the crowded, unsanitary conditions of the factory farm. Today, federal regulators estimate that U.S. livestock consume nearly 30 million pounds of antibiotics a year.

Scientists have seen trouble brewing for decades, but little has been done to address the problem. In 1977, the U.S. Food and Drug Administration (FDA) proposed withdrawing penicillin and tetracycline for use in farm animals, but the strongest action taken thus far has been voluntary recommendations issued in 2012.

For those who believe FDA guidelines fall short, CDC’s warning is rousing support for PAMTA (Preservation of Antibiotics for Medical Treatment Act). Drafted by Congresswoman and microbiologist Louise Slaughter (D-NY), PAMTA would stop routine use of antibiotics in food animals, preserve eight classes of antibiotics for human use only, and bring more transparency to drug use on the farm.

“It is time to put a stop to big agribusinesses doling out pharmaceuticals to healthy animals just because it is better for their bottom line. Antibiotic use in food-animals must be limited to prevent the inadvertent creation of superbugs that are too powerful for our own medicine,” said Slaughter in a press release.

PAMTA is backed by 450 organizations, including World Health Organization, American Medical Association, and the National Academy of Sciences. For years, several groups have been petitioning FDA to enact the same measures, but the agency has resisted. FDA lost two lawsuits in 2012 from petitioners calling for reforms, and has filed appeals for both.

Former FDA commissioner David Kessler said that industry won’t allow reforms. In a March 2013 New York Times editorial, Kessler wrote that there is “more than enough scientific evidence to justify curbing the rampant use of antibiotics for livestock, yet the food and drug industries are not only fighting proposed legislation to reduce these practices, they also oppose collecting the data. Unfortunately, the Senate Committee on Health, Education, Labor and Pensions, as well as the FDA, are aiding and abetting them.”

According to figures Slaughter has confirmed with the FDA, 80 percent of antibiotics sold in the United States are used on animals grown for food. But the Animal Health Institute (AHI), a trade group for pharmaceutical companies that manufacture antibiotics for livestock, says Slaughter makes her case with inflated and misleading statistics.

While Slaughter says that most of the antibiotics are not used to treat sick animals, according to an AHI survey, companies report that only about five percent of antibiotics sold are used to promote animal growth, and most of these drugs are not used in human medicine.

A true picture of drug use is hard to see because many details on farm pharmaceuticals remain an industry secret. However, evidence of drug resistance has emerged at the supermarket.