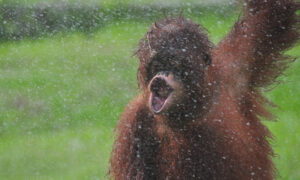 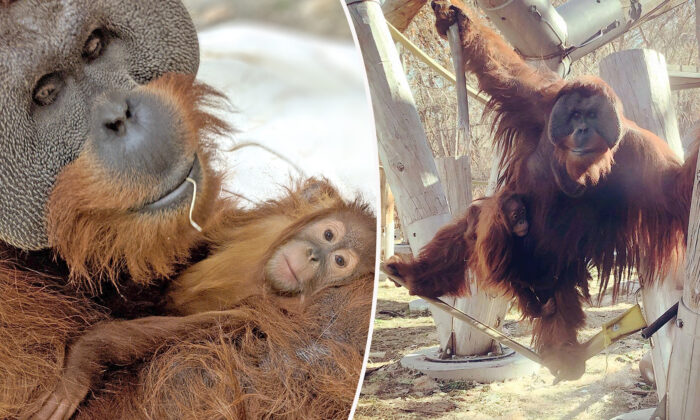 A male Sumatran orangutan has defied the “absent father” role of his wild counterpart by stepping up to care for his 2-year-old daughter after her mother died unexpectedly in a zoo in Colorado.

Female orangutan Nias, who lived at Colorado’s Denver Zoo for fifteen years, passed away on Dec. 17, 2020, at the age of 32. The matriarch is survived by her two daughters, Hesty, aged 10, Cerah, aged 2, and her mate, Berani.

“In the wild, orangutan males are not involved with their offspring,” Denver Zoo posted on Facebook nearly a month after Nias passed away. “To see Berani step up as Mr. Mom is an extremely rare situation, and Cerah couldn’t have asked for a better dad.”

Zookeepers felt “so fortunate” that the young orangutan’s father had “stepped up to the plate.” Protective and attentive to Cerah’s needs, Berani began carrying her, comforting her, and even cuddling with her while she slept.

In one touching photo shared by the zoo, Cerah cuddles with her father, nibbling on his chin. In another, Berani carries his daughter the way his partner used to do as he crosses a rope bridge in the zoo’s orangutan enclosure.

Big sister Hesty, Berani’s stepdaughter, is also helping him take care of Cerah after both the siblings lost their mom. “This family group is particularly special because it’s highly unusual for adult male orangutans to accept unrelated offspring as their own,” the zoo wrote on their website.

Pending a necropsy, Nias’s cause of death remains unknown.

Nias first became part of Denver Zoo’s Great Apes exhibit in November 2005, giving birth to both of her babies at the zoo. In a Facebook post, zoo officials praised Nias for her tremendous growth as a mother between the two births, recalling Nias first watching Hesty like a hawk after her birth.

“But with Cerah, who was born in 2018, Nias became much more relaxed,” they recalled. “[G]uests could often see our littlest orangutan swinging around on her own, while still under mom’s watchful gaze.”

Besides being a nurturing mother, a wonderful mate to Berani, and a “fiercely loyal friend” to her care team, zoo officials also thought of their “Queen Bee” as an ambassador for the critically endangered Sumatran orangutan.

The species has just over 13,000 members left in the wild, reports Sumatran Orangutan Conservation Programme (SOCP). Rainforest destruction is the most prevalent threat to orangutan survival in the wild, with illegal poaching a close second.

Denver Zoo’s partners at Colorado State University’s College of Veterinary Medicine & Biomedical Services are hoping to find out why Nias passed away suddenly. Orangutans in captivity have an average lifespan of 60 years, according to National Geographic.

Meanwhile, in the zoo’s Great Apes enclosure, the family of three, Berani, Hesty, and Cerah are “sticking together and moving forward,” said officials.

On Feb. 15, 2021, as Berani turned 28, Denver zoo posted a video of the trio having fun playing together with some “wintery non-toxic bubble enrichment.” They also took a moment to appreciate the male orangutan for stepping into the act as a parent to Cerah, adding it’s “normally unheard of in the wild.”